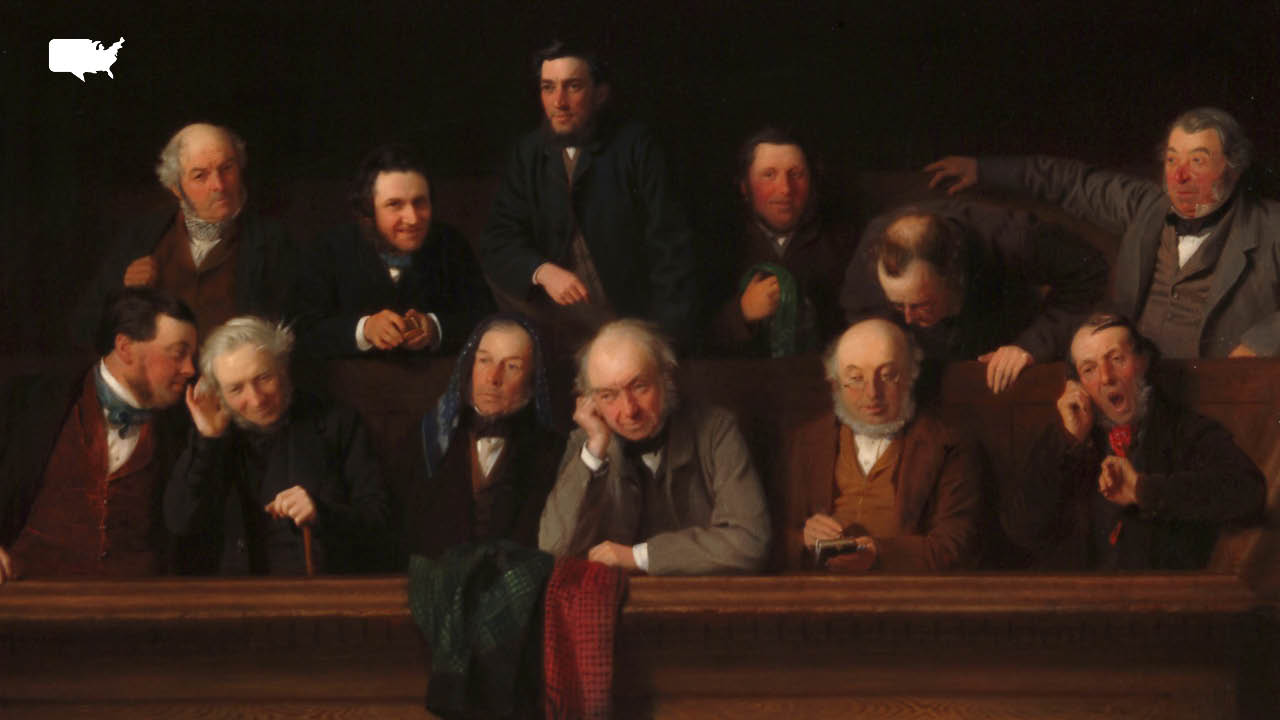 Historians have long found it easy to explain the reaction of colonial elites to Britain’s imperial reforms in the Revolutionary era.  This is because scholars could point to the specific ways imperial reforms threatened elite families’ economic interests, commercial enterprises, and political dominance in the colonies.  It is common, therefore, to hear that the American Revolution was launched in pursuit of the material and political interests of the rich and powerful in the colonies.

Yet if the Revolution served the interests and ambitions of elite families who led the Revolution, what explains the broad support they enjoyed from below (from lower- and middle-class colonists)?  Indeed, many Americans – students, teachers, and historians – struggle to explain what moved common people to make common cause with colonial elites.  Why did ordinary Americans – people who did not sit in the assemblies, and in most cases, did not even vote for representatives – care about and feel threatened by policies that Parliament initiated in the realm of high-politics?

One obvious answer has been that common folks were perhaps duped by the elites.  Historians deploy this explanation repeatedly to make sense of the baffling habit of average Americans to follow the lead of their wealthier countrymen in various national projects.  Thus, the concept of “a rich man’s war, but a poor man’s fight” has been applied to the US Civil War, World War I, the Vietnam War, the Cold War, and to a host of non-military endeavors.  Some historians see the American Revolution as yet another instance in which the rich manipulated the poor to misunderstand their own interests, and to support the agenda of their social superiors.

Lower-class Anglo-Americans, however, offered a fairly coherent, sensible, and believable explanation for their Revolutionary actions.  While most modern Americans’ understanding of colonial resistance to Britain is framed by philosophical abstractions on the nature and purpose of government, most colonists came to support the resistance movement because they, their relatives, their colleagues, or their neighbors had crossed paths with British customs agents, soldiers, or officers of the court.

This was a novel experience for most Americans because, before the 1760s, Britain had few imperial officials in America, and these few were mostly powerless, which means that they were quite lax in (even fearful of) enforcing Parliamentary legislation, including imperial taxes.  The imperial government thus exerted only a light touch on colonists’ local lives.  The result was that the overriding principle of Anglo-American society was self-government.  Local communities saw the absence of coercive law-enforcement by an army or police force as the manifestation of a free society, one in which constituents have a role in enacting and enforcing the laws that govern them.

In the 1760s and 70s, Britain overhauled imperial administration by increasing the number of imperial officeholders in America, strengthening their presence in American towns, offering them more coercive enforcement capabilities (armed customs ships at sea, armed soldiers on land, and military judges in court), insulating imperial officials from the oversight of colonial authorities (with independent salaries and legal protections), and increasing London’s influence over them.  These imperial reforms launched an aggressive law-enforcement campaign, which focused the attention of common people on the constitutional issues that sparked the war – self-government, consent, representation, jurisdiction, arbitrary power, and the rule of law.

In particular, the threat to local courts of law and to jury trials affected sailors, dockworkers, innkeepers, and shopkeepers just as it did wealthy ship owners and merchants;  and it made the constitutional principles over which the assemblies and Parliament argued understandable and personal to a wide cross-section of colonial society.  The attack on jury trials illustrated to Americans that constitutional principles relating to law, consent, provincial liberties, and the imperial constitution were not a matter of high politics – they had a real, direct, and life-threatening impact on them.

When Parliament created Admiralty courts to try piracy cases in 1700, it was controversial because the Crown claimed jurisdiction at sea, curtailed the power of local courts, upended common-law precedents, and purposefully denied English subjects accused of piracy the hallowed right to face a jury of their peers.  In fact, Parliament created these military tribunals because local juries had routinely acquitted accused pirates in civilian courts.  In the face of similar acquittals of accused smugglers and other illegal traders during the French and Indian War, the Sugar Act (1763) expanded the jurisdiction of Admiralty courts to also cover customs offenses at port – smuggling, contraband trade, and trafficking with pirates, smugglers, and illegal traders.  This meant that a colonist accused of murder or rape would be tried by a jury of his peers, whereas a man accused of a customs violation could find himself on trial for his life in front of a military tribunal.

In 1765, the Stamp Act gave Admiralty courts jurisdiction over violations of the Stamp Act as well.  American settlers thus saw their local courts, magistrates, and juries supplanted by imperial military tribunals not just in matters relating to commerce on the high seas, but also in violations that took place hundreds of miles from the coast and had nothing to do with maritime trade.

The ability of local courts and local juries in America to administer justice was a huge issue in the provincial protests of the 1760s and 70s.  Modern historical accounts of these protests focus mostly on economic regulation – the economic burden of taxes, trade restrictions, stamp fees, and the like.  But it was the threat to self-government – the liberties of assemblies on the high end, and of juries on the low end – that were the most visceral concern animating American resistance.  Wealthy and poor folk alike (especially those who made their living at sea or on the docks) saw this constitutional issue as a genuine threat once customs enforcement intensified during and after the French and Indian War.

Each case recorded dryly in the logs of the various Admiralty courts in North America represents a real family – of mariners and merchants, dockworkers and shopkeepers – for whom conviction spelled economic ruin (to say nothing of the penalty the defendant himself faced).  The scope and vehemence of public protests over this issue are a testament to the level of distress that the denial of jury protection engendered in American communities.  Thus, when the Stamp Act Congress petitioned the king in 1765 to repeal both the Sugar and Stamp Acts as unconstitutional, it issued a list of pressing grievances over the loss of American liberties.  Chief among these was the right to a trial by jury.

After the outbreak of the War of Independence, the Continental Congress likewise drafted a list of grievances.  While the Declaration of Independence was a diplomatic document that addressed royal courts in Europe, it was also written for a domestic audience, to explain and justify to Americans the decision to secede from the British Empire, and to thus galvanize support for the Patriot cause in anticipation of the next stage of the war.  Its authors therefore articulated not only the diplomatic priorities of the Continental Congress and the domestic concerns of the political class in the colonies, but also the fears and resentments of common citizens.  The Declaration of Independence thus included multiple charges against George III for circumventing local courts of law, depriving colonists “of the benefits of Trial by Jury,” and otherwise undercutting the judiciary in the colonies.

Given the level of public distress over this, state constitutions created during the war guaranteed citizens the right to a jury trial.  After the Revolution too, this issue remained at the forefront of Americans’ minds as they considered threats posed by their new central government – of the ten items that comprise the American Bill of Rights, five protect Americans in their dealings with Federal courts of law.  And three of them explicitly protect Americans’ right to a jury trial.

Since the Middle Ages, Englishmen saw the right to be tried by a jury of their peers as their birthright.  They took pride in it as a hallmark of liberty, and they saw the absence of jury trials in France as emblematic of French tyranny and arbitrary power.  Whereas plaintiffs and defendants around the world (and throughout history) are subject to the arbitrary power of a state-appointed judge who does not share their background, circumstances, and understanding of the law, the English jury system allows local communities to administer justice themselves.

Yet the historical discourse on the Revolution focuses not on juries, but on legislatures – on political representation in Parliament and the assemblies.  This reflects the general political discourse about democracy in our society, which likewise focuses on citizens’ right and ability to choose their representatives for city council, state legislature, and the national legislature.  The fraction of a voice that citizens have in deciding who will represent them gives them a fraction of a fraction of indirect influence on various government policies (from taxation and energy policy, to education, welfare, immigration, and foreign policy).  But most people understand that these government policies are not nearly as impactful on them in their private lives as a prosecutor who hauls them to jail, indicts them for a crime, and threatens to take from them their life savings, their good name among friends and neighbors, their professional reputation among clients and colleagues, their ability to make a living, their freedom, their children, or their life.

For most colonists, therefore (as for most modern Americans), the issues of liberty outlined in the Magna Carta and English Bill of Rights became palpable not on voting days, but when they or their acquaintances found themselves in court.  In comparison to voting for political representatives, jury trials offered practical liberty and direct self-governance, of which the consequences were immediately visible and comprehensible in a community’s daily life.  Moreover, while most people in Britain and the colonies were not eligible to vote, all were eligible to face prosecution.

One should not be baffled, therefore, by the fact that poorer and non-voting colonists saw the assemblies’ cause as their own.  After all, poorer Americans find themselves in legal jeopardy more often than others, and are more vulnerable to law enforcement agents, prosecutors, and judges.  Moreover, the attachment to juries is still very much on display today in every court in the land.  The jury trial is still the most basic and most important function of government for modern Americans, and certainly the most direct and impactful form of self-government.

Thus, when poorer Americans joined the anti-British resistance movement in the 1760s and 70s, they voiced their own fears and anger, rather than parroting rich people’s propaganda.  The lawless elimination of jury trials for whole classes of criminal cases (such as smuggling and illegal trade) triggered sincere, practical, and reasonable concerns for many colonists.  There is therefore no reason to assume that the poor were dupes or victims of false consciousness.  In fact, there is good evidence that they understood their own circumstances better than we can 250 years removed.

Guy Chet is Professor of American History at the University of North Texas, and author of The Colonists’ American Revolution: Preserving English Liberty, 1607-1783 (Wiley, 2019).  Portions of this essay are drawn from the book, with Wiley’s permission.