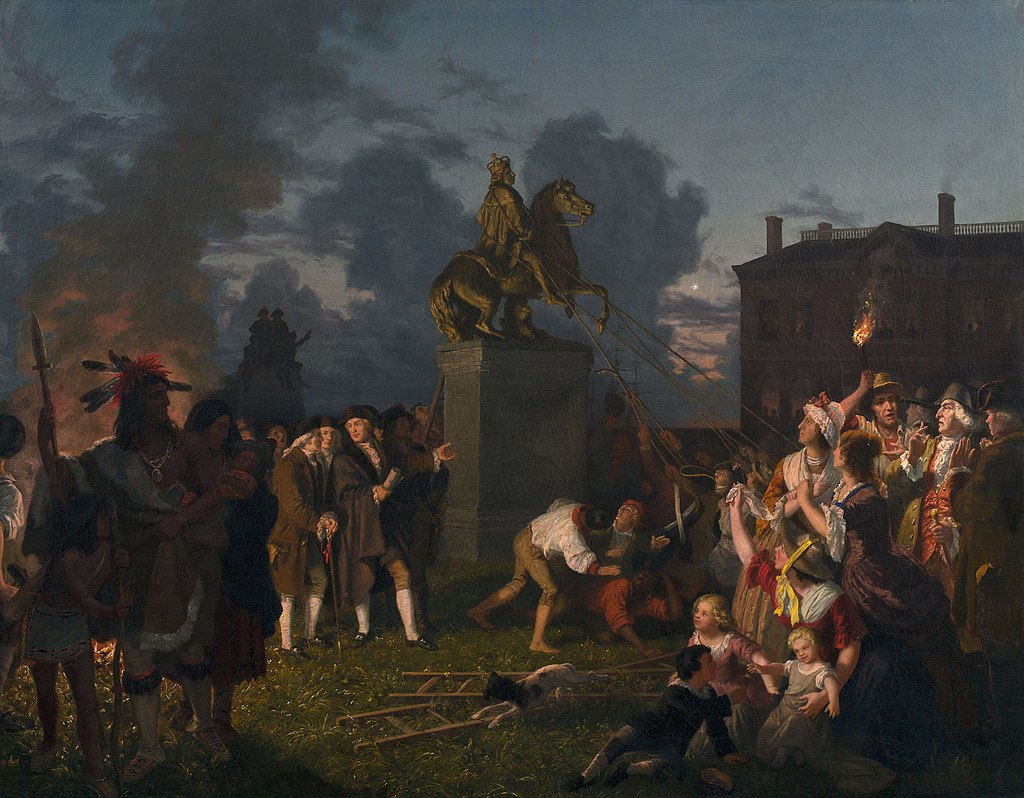 We all have heard the phrase “constitutional crisis” used to describe the present political strife over the interpretation of our founding documents. While one might understandably see these disagreements as a contemporary issue, such crises are hardly new. Opposing interpretations of our constitution reflect America’s perennial problem with authority, that age-old menace to man’s ambition for power. The American writer, Walter Lippmann, wrestled with this same issue throughout his intellectual journey. A two-time Pulitzer Prize winner, he was one of the most influential political commentators of the early 20th Century, whose writings on American political life remain prescient for their insight into mass culture.

As a young man, Lippmann saw little value in the notion of an inherited past. This belief culminated in his first book, A Preface to Politics (1913).  At Harvard, Lippmann aimed to debunk the archaic notion that men are socially guided by a sense of reverence or respect for tradition.  He initially found liberation through revisionist studies of American history.  For example, Lippmann was influenced by Charles Beard’s An Economic Interpretation of the U.S. Constitution, which argued that the American Founders acted in their own best, financial interests when making the Constitution. Beard’s progressive historiography was radical to the extent that it provided politicians and legal thinkers from that day forward a reason to dismiss the authority of the Founders: Their noble cause, centered on the rights of man, was nothing but ornate ink on paper to mask their underlying greed.  Narratives such as Beard’s enkindled Lippmann’s early socialism, facilitating his criticism of the United States’ Constitution, which he saw as the embodiment of the lingering political authority of these fallen Founders.

Lippmann’s preliminary critiques against the Founders’ authority employed a similar historical and philosophical analysis.  He used the framework of the Enlightenment and the context of the 18th century to prove how the Founders failed to uphold the ideals of this intellectual revolution.  At the time when the Founders were crafting the Constitution, empiricism was reaching its apex as the default academic standard in the social sciences.  Politics eventually joined the social sciences to adopt these quantitative methods.  According to Lippmann’s historical analyses, the pervasiveness of empiricism led the Founders to translate Newtonian conceptions of the world (i.e. mechanical rather than spontaneous events) into politics.  The result was a carefully planned federal government of checks and balances.

Such faith in a mechanical plan despised Lippmann because it solidified a political system that could never be refuted or disproven.  Scientific—that is, deductive—reasoning should be extended to political or social reforms and follow a process of trial and error without a fixed conclusion of the best political system.  The form of American federalism that the Constitution outlines prevented this possibility for improvement.  Constitutionalism, according to Lippmann, demands that government structure and its corresponding political reforms be in line with what the Constitution says, so herein lay the problem: In theory, the Constitution was supposed to be a liberating document that broke from previous political orders; in practice, it usurped that same formalism it sought to eliminate.  What sort of Enlightenment thinkers, allegedly freeing themselves from the limitations of authorities past, would deny this form of intellectual liberation to their progeny, especially within the backdrop of the American project?  Lippmann’s conclusion, and warning, for America was that constitutionalism would eventually result in a vapid political life without room for creativity and socio-political renewal.

Years of genuine philosophical inquiry on the role of liberty and authority on human nature, however, eventually gave Lippmann new perspective.  Lippmann’s struggle with constitutional authority ended, notably after revisiting the writings of his former professor, the American philosopher George Santayana.  Santayana is known today for his political conservatism drawn from a naturalist and spiritualist interpretation of the world.  His political philosophy calls for an individual cultivation of reason.  What Lippmann considered to be the flaws of constitutionalism, Santayana considered the problems of liberal democracy as a system that does not provide men with the necessary foundation to understand and implement their freedom in the long run.  Like Lippmann, Santayana was an enemy of cultural, political, and intellectual uniformity, and he was an advocate of reason. Santayana’s concept of reason, however, is far more nuanced.

At first, Santayana believed in the Hegelian philosophy of history, which claimed that man was always improving on his reason.  Santayana, however, strayed outside the spell of “progress,” realizing that the mere passing of millennia does not perfect reason; it can only be individually improved through a comprehensive approach that requires equal engagement from our rational minds and our intuitive spiritualism, what he called “animal faith.”  Santayana borrowed from Schopenhauer’s principle of sufficient reason that advocated for a more ascetic understanding of reason than the Enlightenment and progressive forms that simply did away with authority and tradition.

This understanding of reason sheds light on our relation to our nation’s founding.  Santayana’s holistic philosophy captivated Lippmann enough to provoke him to reassess his rejection of authority.  If reason is tied to a combination of present and past reality, then the American Constitution, properly understood, should be viewed as a form of authority that asks us to develop our reason in an effort to understand why the Founders believed that their system was good; it does not force us to discount our reason in blind obedience.  What Lippmann initially lacked in his reading of the constitution, then, was depth; not in his understanding of the Founders’ wisdom, but in his personal discovery of the accuracy, and therefore the endurance, of their insight, which, broadly construed, was derived from three elements: Historical knowledge of major European events; spiritual sensibility (i.e. their Christianity, namely Protestantism); and their practical, lived experience as a collective of politicians, farmers, generals, lawyers, businessmen, and even ministers.

Lippmann originally believed that the Founders used their reason to produce the Constitution, thereafter closing the conversation for posterity and grossly misjudging the resilience and integrity of their political and intellectual work.  Lippmann’s rejection of authority was misdirected, for authority did not deny future citizens the opportunity to reinvigorate the Constitution with their experiences in later generations; it gave them the foundation with which to keep sight of their nation’s origins that combined practical experience with spiritual guidance; reason with morality.

What Lippmann came to realize later in life is that human beings have a natural aversion to Authority, which exists as one of the most prevalent obstacles to our (self-idealized) intellectual, moral, and political perfection.  Time and time again, we defy it.  Francis Bacon wrote about the idols of the mind to demonstrate how our subjective biases obscure true, scientific knowledge; René Descartes usurped Aristotle by rejecting his epistemological method to become the father of modern philosophy; The Protestant Reformation aimed to rectify the unassailable Roman Catholic Church; French Revolutionaries aimed to free themselves from the monarchy and from God—never mind that it took them 16 constitutions before settling on one that they wouldn’t eventually reject after a couple of years.  In recent history, postcolonial nations have revolted against their settlers; Shakespeare has been repeatedly ousted from university English curricula.  A crisis of constitutionalism, in which we seek to revise it ad hoc, seems only fitting within this wide-ranging genealogy.

Today, the American Constitution faces similar challenges.  Do we accept, or challenge, its governing authority?  And, if so, on what basis?  The direction in which our constitutional order is headed is criticized from different ends, either as a practical, policy-based threat such as the irreversibility of the administrative state or as something emotional, like the growing irreverence towards our founding principles.  These are fundamentally one and the same.  Much like the growth of the State, originalism emerged during the Progressive Era, not the Founding as we might anachronistically believe.

Originalism presents what many consider a remedy for constitutional crises, as it professes to go back to the “original” interpretation of our constitution—a feat that would require a vast amount of historical knowledge that anyone would be pretentious to claim.  In fact, one can hardly think of a Founding figure who explicitly wrote or advocated for what we might recognize as an originalist approach to interpreting our constitution.  Originalism, in other words, is as modern of a solution as living constitutionalism, and equally based on interpretation.  Both are a literary approach, an analytical tool that requires reading between the lines.  But our discussions of a constitutional crisis are not just disagreements about hermeneutics; they demonstrate our problem with the role of authority in our political life, which we can rightly extend to the role of authority in our personal lives.

Assessing this dilemma opens us to conversations regarding the role and evolution of liberty in our lives, for authority comes in two forms: That which impedes liberty, and that which limits it.  Oddly enough, people who reject the latter forms of authority that limit liberty (such as religious, police, and parental authorities) are quick to adopt the former (such as big government).  One must wonder: Is the desire for authority—and the consequential rebellion against it—an innate characteristic of the human condition?  Paradoxical as it may be, we must learn to discern between salutary and pernicious forms of authority, such is the premise that Santayana discussed in his final book Dominations and Powers (1951).

Now, a reassessment of the role of authority in our lives may not be a simple “solution” (is there ever such a thing?) to our government’s problems and the challenges facing our civic life.  If threats to constitutionalism are indicative of our tension with authority, then philosophical inquiry on this topic is vital so that we discern what type of authority we choose to reject along our development: The type that keeps us intellectually humble, searching moral guidance, and encouraging us to seek the good of our histories, stories, and traditions, or the type that cyclically replaces our past limitations and mistakes with new iterations of those same faults with the hope that mankind will triumph someday.  Lippmann’s intellectual journey ended with an acceptance of the former and a rejection of the latter—what American intellectual historian, Dr. Ted McAllister, described as a “dreadful emancipation” from Modernity and its guises; that is, the sense that we can erase and replace all traces of tradition as we see fit, coming out improved, more perfect.  Perhaps this perennial paradox of authority will never end, but attempting to understand it remains a worthy endeavor, if only for the humbling effect it may have on our ambitious, imperfect minds.