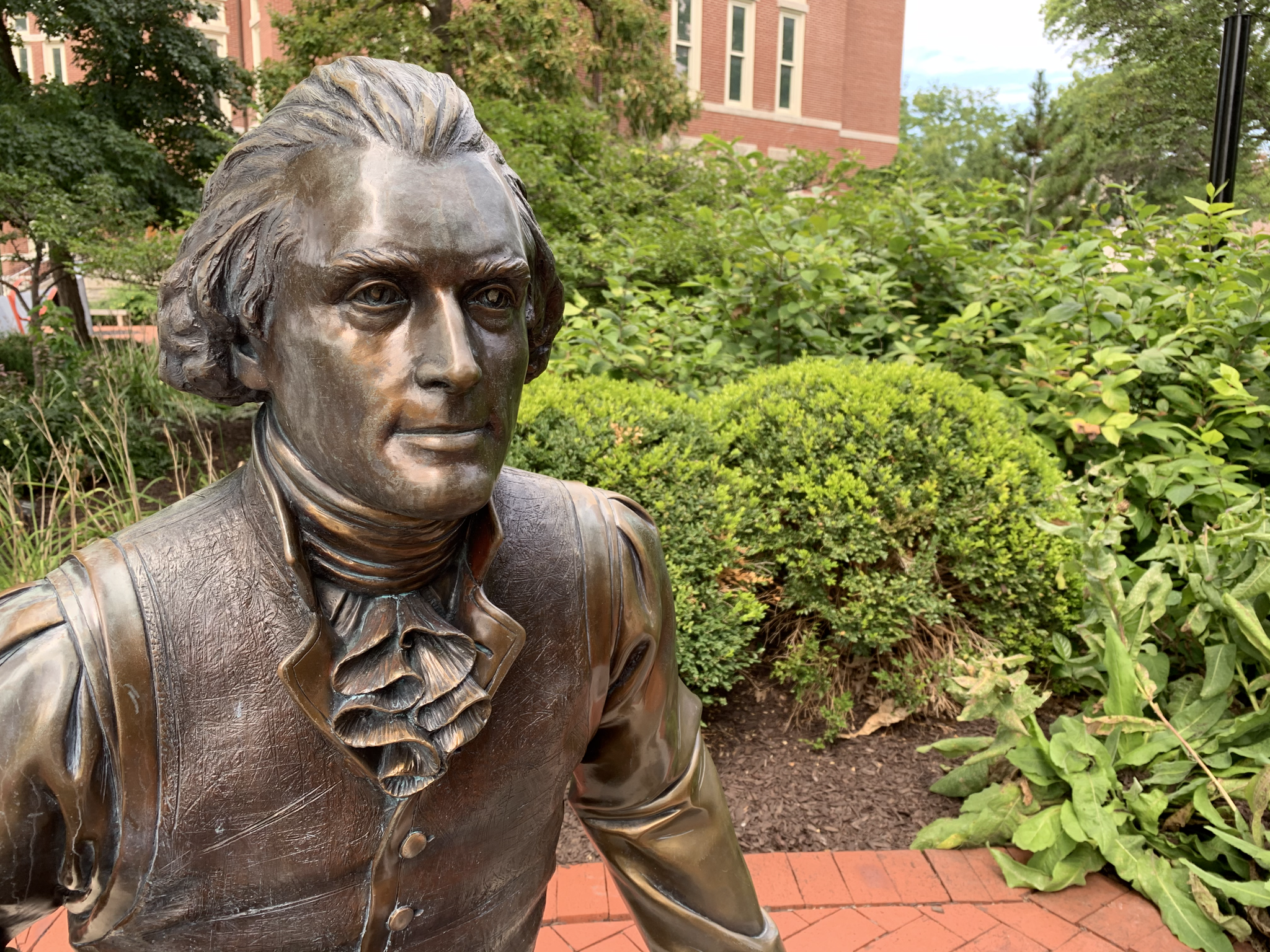 On a bench in the quad a few yards away from the main administration building at Mizzou sits a statue of Thomas Jefferson, lap desk perched on his knee, drafting the Declaration of Independence.  The statue was donated to the university in 2001 by the MU Jefferson Club and has been the subject of controversy for several years now.  Some students, faculty, and staff have petitioned for its removal; others have petitioned that it be allowed to remain.  MU’s President and Chancellor has decreed that the statue will remain in place because at Mizzou we do not “remove history,” but that decision has hardly settled the matter.  What do we do with Jefferson’s statue?

Maybe it’s a classic academic dodge, but I say that we are asking the wrong question.  Over the past couple of decades, we have over and over made the discovery that venerable institutions or popular historical figures were tainted by investment in slavery.  In the newspaper, at least, the discovery always seems shocking.  Research into old records reveals that universities (or other old institutions) owned slaves and relied on their labor to keep the school going or sold slaves in an effort to pay off their debts.  Institutional leaders are always shocked, perform some public soul-searching, issue an official apology, and perhaps rename a building, set up a website, or erect a memorial in honor of the contributions made by enslaved men and women.  For as long as the news lasts or visitors still study the memorials, the public is made aware that the success of that institution rested on the abuse of marginalized people.  I can’t imagine that makes much difference to those who are dead and gone, but, as a reminder to contemporary Americans of the long reach of slavery’s history in the United States, it may do some good.  The problem is that Americans never seem to learn the lesson that this oft-repeated cycle ought to teach us.

Dig deep enough into the records of almost any institution or public leader in the years before 1865, and you will find slavery because American wealth was built on the backs of slaves.  Somewhere in our early education, most Americans learn that slavery was exceptional in the United States, that it was confined to the South and counterbalanced by a more inclusive commitment to liberty in the “Free North.”  There are three (factual) problems with this idea.  The first is that slavery was only confined to the South and parts of the West relatively late in American history.  Before the American Revolution, slaves lived throughout the American colonies.  Southern colonies had higher concentrations of slaves because their economies depended on intensive agriculture, but none of the thirteen colonies outlawed slavery (and made it stick for more than a handful of years).  After the American Revolution, Northern states did begin to abolish slavery within their own bounds, but this was a gradual process that had not even started in some parts of the “Free North” by 1800.  Gradualist approaches to ridding the North of slavery meant that slaves continued to serve in the North into the early decades of the nineteenth century – just a few scant decades before the outbreak of the Civil War.

Nor did Northern emancipation necessarily mean that Northerners opposed slavery in principle.  While some who pressed to end slavery in the Northern states did so out of political or religious conviction, for others ending slavery meant increased opportunities for white men by eliminating occupational competition.  Northern slave owners often resisted emancipation, in many cases selling slaves out of state or using apprenticeships and indentures to retain the service of those they could no longer claim as chattel.  The end of slavery in the North was largely brought about, less by new laws, and more by African-Americans who resisted slavery in a climate where the institution was losing widespread public support.  By the 1830s, the abolition movement organized in the North, and some of its more ardent adherents not only advocated ending slavery throughout the United States but also promoted human equality – sometimes between men and women as well as between Black and White people.  It is worth remembering, however, that “radical abolition,” as this movement is known, attracted about a quarter of a million adherents by the Civil War.  More people joined the Gold Rush than the cause of immediate abolition.

Imagining slavery as somehow confined to a tiny proportion of American history also ignores the economic ties that bound the United States together (and to the wider world) in the years before the Civil War.  In the colonial period, the North’s profits from slavery came less from owning slaves directly than it did from shipping and selling slaves, and from selling fish and agricultural goods to feed slaves in the Caribbean.  In the nineteenth century, slave-grown Southern cotton fed the start of the North’s industrial revolution.  Americans both North and South consumed goods tainted with slavery on a daily basis.  Indeed, it was nearly impossible not to do so.  We know because a small subset of radical abolitionists tried it.  The “Free Produce Movement” as the attempt was called ended in failure for the majority of even the most dedicated abolitionists (including the famed William Lloyd Garrison) because many types of goods were produced almost exclusively by slave labor in the United States.  The taint of slavery was hard to avoid because the United States was completely steeped in slavery and the profits it provided.  Most free Americans, of course did not try to avoid it at all.

Readers who have stuck with me this long may be wondering what my point is and what this has to do with a modern statue of Thomas Jefferson sitting a few yards from Jesse Hall.  Let me be clear (if somewhat long-winded).  My point is not to excuse Jefferson’s exploitation of slave labor or even to contextualize it.  Rather, my point is that if we want to remove the monuments to all of those who were complicit in slavery, then we need to remove monuments to almost all prominent Americans who lived before the Civil War (and probably until at least the mid-twentieth century, but I claim no expertise in this later period).  This argument is often made in reductio ad absurdum (if we remove Jefferson, then we have to remove [insert virtuous name here]), but it does not have to be.  If we are serious about not venerating those who owned slaves or benefitted from their labor, then we need to remove almost all monuments to people who lived more than a century or so ago.  We can do that.  Monuments are for the living, and we can decide that we want to cast off the past and use our public spaces in different ways.  This would not “erase” or “remove” history.  Thousands upon thousands of professional historians and millions upon millions of books would remain to give us all the history we want.  Removing statues is not the same thing as burning archives.

We need to ask ourselves what we want our monuments to do for us.  Monuments can function in a variety of ways.  At their most straightforward, they depict a human figure and implicitly or explicitly call on viewers to remember that person’s virtue and imitate it.  They can shape landscapes in ways that remind us of who and what went before.  (Full disclosure: I grew up a few blocks away from the Confederate statues currently being removed in Richmond, Virginia.  They reminded me of the uniqueness of Richmond as the historical capital of the Confederacy and that remarkable and positive change can happen over time.  I am white, and it actually did not occur to me in childhood that anyone would find the statues intimidating or upsetting.  Obviously, I was missing a lot.)  Because history helps to explain the present, monuments that remind us of what came before can help us to think about how we came to be who and what we are in the present.  Monuments can also be used to intimidate (as many of the Confederate monuments erected in the twentieth-century were intended to do) or to communicate ideas about belonging and exclusion.  What is Thomas Jefferson’s monument doing at MU?

If we listen to our students, that fresh-faced depiction of the drafter of the Declaration of Independence is communicating different messages to different audiences.  To some, it is an indication that our community honors someone who exploited other human beings and thereby suggests that some students can never really be part of Mizzou’s community.  To others, it is a monument to someone who imagined a society free of hereditary privilege and the imposition of religious doctrine, and acted to bring those ideals closer to reality.  Both groups have a point.  Thomas Jefferson was both of those people, and an honest and productive memorial should acknowledge that.  Right now, Jefferson’s statue is, I think, primarily functioning as a point of conflict and an invitation to join sides.  What if we could encourage the monument to do more than perpetuate entrenched divisions?  One option would be to add some complexity to Jefferson’s statue.  We are an educational institution, after all.

The point of that complexity cannot be shock at the taint of slavery; it should be a recognition that slavery as well as liberty lie at the heart of our founding.  Few figures embody that contradiction as openly as Jefferson and so few figures offer as ample an opportunity to explore it.  If we want to continue to honor early Americans with statues and memorials, then we have to stop being shocked when it turns out that those figures had feet of clay.  The United States has feet of clay.  It was built and born on the backs of enslaved Africans on land appropriated from Native Americans.  Of course, that was not the whole story.  It was also the first large, modern republic.  It incorporated some ideas about liberty and equality that we still find pretty nifty today.

As long as we use monuments to immortalize only half of that equation, we invite monuments that divide us.  As long as we set up statues that portray only the qualities we want to remember, we build monuments that are destined to disappoint us.  I do not have particularly strong feelings about the statue of a young Thomas Jefferson perched with his writing desk on a bench in Mizzou’s quad.  I like it.  I do not think it is great art, but I like its youthfulness and energy.  I do not like that for some students it communicates exclusion.  What I would like is for this statue and others like it to communicate the complicated – even confounded and contradictory – history of the United States because the sooner we stop being surprised to find slavery in our past, the sooner we can move to a national reconciliation.

M. Michelle Jarrett Morris is an associate professor of history at the University of Missouri and the author of Under Household Government: Sex and Family in Puritan New England.