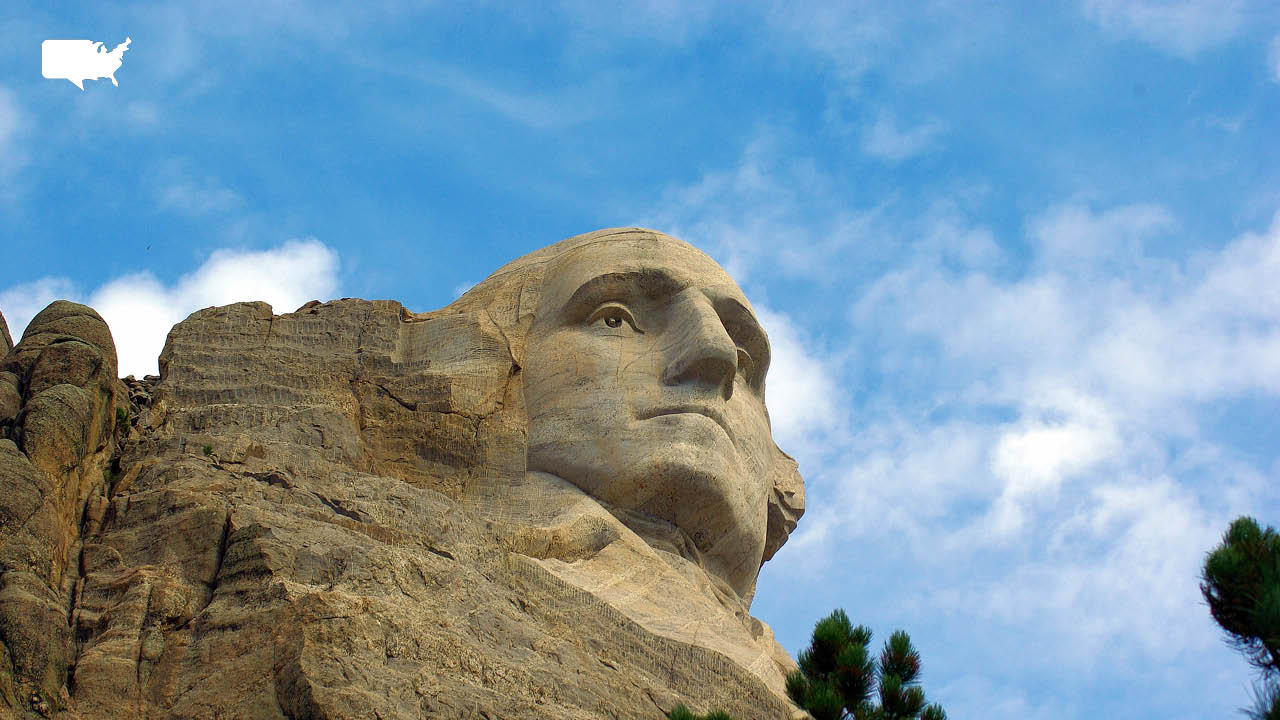 On September 17, 1787, the delegates to the Constitutional Convention gathered one last time in the Assembly Room of what is now Independence Hall to sign the charter that they had spent the past four months crafting. As the last of the thirty-eight signers affixed their names to the Constitution, Benjamin Franklin called attention to the high-backed mahogany chair that the president of the Convention, George Washington, had occupied at the head of the room that summer, which had a decorative half-sunburst carved into the crest. Franklin remarked that painters often found it difficult to differentiate, in their compositions, a rising sun from a setting sun. “I have,” he said, “often and often, in the course of the session, and the vicissitudes of my hopes and fears as to its issue, looked at that [sun on the chair] behind the President, without being able to tell whether it was rising or setting: but now at length, I have the happiness to know, that it is a rising and not a setting sun.”

Franklin’s quip is generally taken to be emblematic of the great hopes that the founders had for the constitutional order that they had just formed. Whatever sense of optimism they may have felt at the new government’s birth, however, almost none of the founders carried it to their graves. Franklin survived to see the government formed by the Constitution in action for only a single year, but most of the founders who lived into the nineteenth century—or even to the dawn of the new century, like Washington—came to feel deep anxiety, disappointment, and even despair about the government and the nation that they had helped create. Indeed, by the end of their lives many of the founders judged the Constitution that we now venerate to be an utter failure that was unlikely to last beyond their own generation. My new book, Fears of a Setting Sun: The Disillusionment of America’s Founders (Princeton University Press, 2021), tells the story of their disillusionment.

The book focuses principally on four of the preeminent figures of the period: George Washington, Alexander Hamilton, John Adams, and Thomas Jefferson. These four lost their faith in the American experiment at different times and for different reasons, and each has his own unique story, which I tell in a series of three chapters devoted to each of them.

Washington became disillusioned above all because of the rise of parties. As partisanship began to arise within his Cabinet and around the nation in the early 1790s, he bemoaned the “internal dissentions” that were “harrowing & tearing our vitals” and making it “difficult, if not impracticable, to manage the Reins of Government or to keep the parts of it together.” Unless the partisan bickering abated, he warned Jefferson, the republic “must, inevitably, be torn asunder—And, in my opinion the fairest prospect of happiness & prosperity that ever was presented to man, will be lost—perhaps for ever!” When the partisanship did not abate—on the contrary, it grew continually worse—Washington’s outlook became bleaker. During his retirement he grew convinced that “party feuds have arisen to such a height, as to … become portensious of the most serious consequences” and that they were unlikely to “end at any point short of confusion and anarchy.” By the end of his life, Washington was certain that the country was “moving by hasty strides to some awful crisis.”

Hamilton’s discontents stemmed from his belief that the federal government was not sufficiently vigorous or energetic. He worried from the very outset—during the Philadelphia Convention itself—that the government formed by the Constitution would be too feeble to survive for long. Over the course of the 1790s he devoted most of his considerable energy to bolstering the government as much as possible, but he was never convinced that he had managed to do enough, and any remaining hopes that he may have had were dashed in 1800 when his arch-enemy Jefferson was elected president with a mandate to pare down its powers still further. “In vain was the collected wisdom of America convened at Philadelphia,” Hamilton wailed in 1802. “In vain were the anxious labours of a Washington bestowed.” Though he was felled by Vice President Aaron Burr’s bullet at age forty-nine, by that point Hamilton had already come to deem the Constitution a “frail and worthless fabric” and to conclude that “this American world was not made for me.” He died believing that “every day shews more and more the much to be regretted tendency of Governments intirely popular to dissolution and disorder.”

Adams became disillusioned principally because he believed that the American people lacked the requisite civic virtue for republican government. Misgivings about the public-spiritedness of the American people suffuse his correspondence from the Revolution onward. As early as January 1776 he remarked that “there is So much Rascallity, so much Venality and Corruption, so much Avarice and Ambition, such a Rage for Profit and Commerce among all Ranks and Degrees of Men even in America, that I sometimes doubt whether there is public Virtue enough to support a Republic.” It was not long until these lingering doubts were thoroughly confirmed: his fellow citizens would not in fact put the public good ahead of their own self-interest, Adams came to believe, and so republican government could not be expected to endure for long in the United States. “Oh my Country,” he exclaimed in the midst of his long retirement, “how I mourn over thy follies and Vices, thine ignorance and imbecillity, Thy contempt of Wisdom and Virtue and overweening Admiration of fools and Knaves! the never failing effects of democracy. I once thought our Constitution was quasi a mixed Government, but they have now made it, to all intents and purposes, in Virtue, Spirit and effect a democracy. We are left without resources but in our prayers and tears.” To his son John Quincy, he predicted that “the Selfishness of our Countrymen is not only Serious but melancholly, foreboding ravages of Ambition and Avarice which never were exceeded on this Selfish Globe … the distemper in our Nation is so general, and so certainly incurable.”

Finally, Jefferson’s despair arose from a number of sources, but above all from the sectional divisions that were laid bare by conflict over the spread of slavery. For most of his life he was the most optimistic of the founders, harboring a seemingly unshakable confidence in the wisdom and goodness of the American people. During the Missouri crisis (1819–21), however, he famously proclaimed that the conflict between North and South over the expansion of slavery, “like a fire bell in the night, awakened and filled me with terror. I considered it at once as the knell of the Union … I regret that I am now to die in the belief that the useless sacrifice of themselves, by the generation of ’76. to acquire self government and happiness to their country, is to be thrown away by the unwise and unworthy passions of their sons, and that my only consolation is to be that I live not to weep over it.” Nor was this an isolated moment of anguish: the centralization of political power kept Jefferson mired in the depths of despair for the nation. Just months before he died, he bemoaned “the evils which the present lowering aspect of our political horison so ominously portends.” He had expected, he confessed, that “at some future day, which I hoped to be very distant, the free principles of our government might change … but I certainly did not expect that they would not over-live the generation which established them.”

Madison: The Exception that Proves the Rule

Washington, Hamilton, Adams, and Jefferson were the most prominent of the founders who grew disappointed in what America became, but they were certainly not the only ones. In fact, most of the other leading founders—including figures such as Samuel Adams, Elbridge Gerry, Patrick Henry, John Jay, John Marshall, George Mason, James Monroe, Gouverneur Morris, Thomas Paine, and Benjamin Rush—fell into the same camp. The most notable founder who did not come to despair for his country was the one who outlived them all, James Madison. Madison did harbor some real worries from time to time, particularly during the nullification crisis (1832–33), but overall he remained sanguine about the nation and its politics all the way until his death in 1836. In March of that year, he declared that however many problems the nation may face and however uncertain the future may be, “I am far … from desponding of the great political experiment in the hands of the American people.”

The book also devotes a pair of chapters to exploring why Madison remained relatively confident in the American experiment when so many of his compatriots did not. There are a variety of potential explanations for why he was such an outlier, but one of them was precisely that he had lived so long and seen so much in company with the nation that he had helped to found. Madison reasoned that if the Constitution and the union managed to survive the Alien and Sedition Acts (a harsh crackdown on civil liberties spurred by war hysteria), the War of 1812 (during which much of the capital went up in flames under Madison’s own watch), and the Missouri crisis (the biggest confrontation yet over the nation’s most divisive issue, the expansion of slavery), then surely it could withstand a good deal more. The longer the nation endured, the more durable it seemed.

The View from the Present

If Madison could find solace in the fact that America’s constitutional order had managed to weather nearly a half-century’s worth of storms by the time he reached old age, then perhaps we should be cheered to recall that it has now survived for more than two hundred and thirty years. We might also take a certain comfort in the fact that, however appalling the state of American politics might be at the moment, the political situation was even worse when the founders whom we so admire presided over the nation. Most obviously, we no longer countenance widespread chattel slavery or the routine dispossession and even massacre of indigenous tribes; on the contrary, basic civil and political liberties have never been extended to more people.

Political violence is far less common today, the harrowing attack on the Capitol on January 6 notwithstanding; the nation’s first decade saw thousands of armed citizens march on an army outpost in rebellion against a tax at one point, and legislators brawl on the floor of the House of Representatives with canes and fire pokers at another. The ugliness of the last presidential election pales in comparison to that of the election of 1800—a contest between Jefferson and Adams, two of our most revered founders. Today’s much-maligned “mainstream media” is in reality far more responsible and fact-based than the nakedly partisan newspapers of the 1790s.

None of this is grounds for complacency, however, for today’s political ills are both serious and pressing, as the elderly Washington, Hamilton, Adams, and Jefferson would surely remind us. Madison, though, would encourage us to summon a broader sense of perspective before announcing the doom of the republic.

Dennis C. Rasmussen is professor of political science at Syracuse University’s Maxwell School of Citizenship and Public Affairs. His books include The Infidel and the Professor: David Hume, Adam Smith, and the Friendship That Shaped Modern Thought.