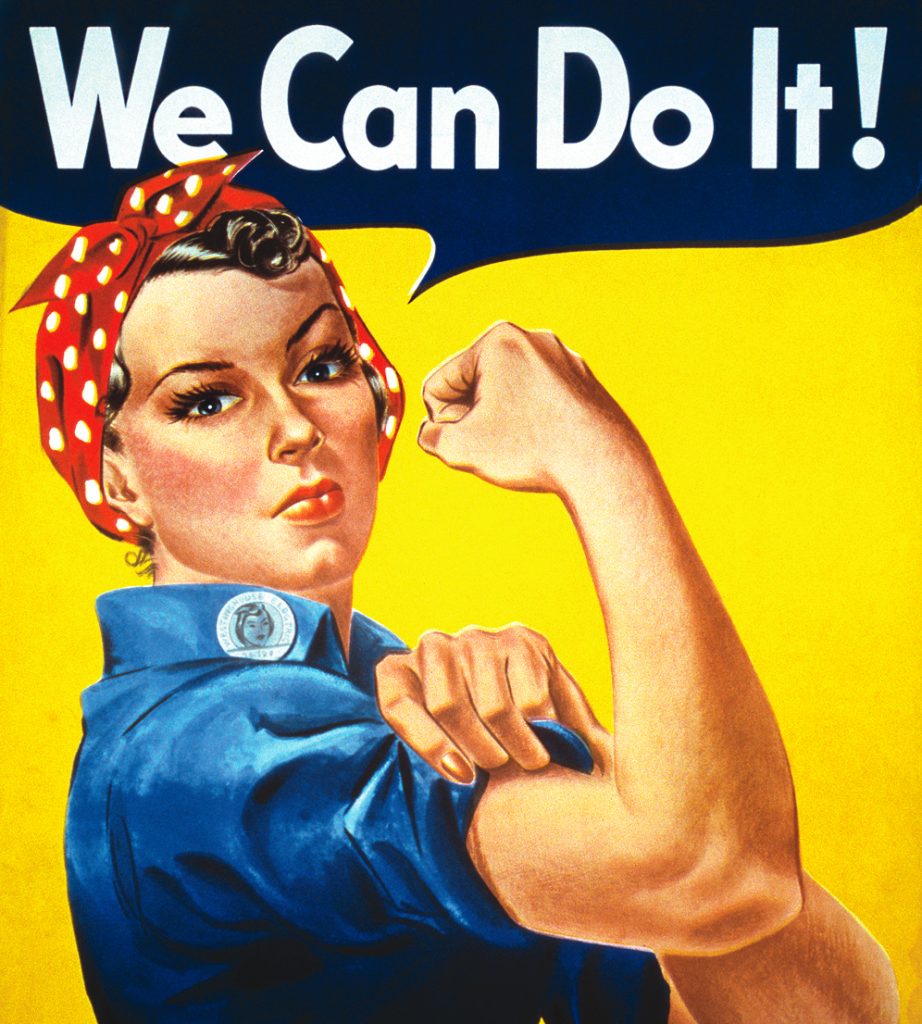 The success of the second-wave feminist project requires a fundamental revolution in society’s mores and institutions. This revolution is closely connected with Dewey’s progressive political project.

Like much of the American tradition, today’s feminism speaks the language of rights, liberty and equality. Yet there is also something within feminism hostile to the principles of limited government, constitutionalism, and civil liberty. This hostility comes out through an examination of the philosophic origins of feminism. American feminism sits at the convergence of French existentialism and American Progressivism, each of which include a project for political reform that is difficult to complete. In thinking through the directions that feminism has taken, we see a rolling revolution.

By feminism I mean second-wave or radical feminism. Second-wave feminists separate sex from gender and emphasize building one’s own identity, from scratch, as it were, without any reference to one’s body or to social expectations. As I develop at greater length elsewhere, the success of the feminist project, as these feminists see it, requires a fundamental revolution in society’s mores and institutions. This revolution would be realized if roles in society were distributed equally between men and women, if each woman enjoyed complete economic independence from any particular man, and if all sexual taboos were eradicated. Since none of these goals can be expected from human beings, the feminist project is unfinished and unfinishable. Will it always be with us?

BEAUVOIR’S FEMINISM POINTS TO A LIFE WHERE WOMEN AND ALL HUMAN BEINGS STRUGGLE AGAINST ANYTHING THAT MIGHT LIMIT THEIR SELF-DETERMINATION.

The philosophic justification of re-interpreting what would become known as sex and gender comes from overseas: the highly influential French feminist Simone de Beauvoir. Her opus, The Second Sex (1949 French; 1953 English translation), provides the framework for radical or second-wave feminists who would criticize and deconstruct seemingly natural distinctions in human life. She begins The Second Sex asking “what is a woman?” She answers:

“One is not born, but rather becomes, a woman. No biological, psychological, or economic fate determines the figure that the human female presents in society; it is civilization as a whole that produces this creature. . .which is described as feminine.”

Sex is what one is born with—one’s natural body and closely related psychological attributes. Gender is what fate or civilization makes one, the attributes that are, in Beauvoir’s view, foisted arbitrarily upon individuals to sustain existing power structures in society.

Most thinkers before Beauvoir thought that gender was grounded in sex, so that the womanly character that civilization encouraged was related to the sexual needs, reproductive faculties, and distinctive psychology of women. Modesty, for instance, was encouraged because it befit a mother and served the interests of women. Social roles such as motherhood, wife, and an emphasis on jobs in caring professions have made women into the second sex.

Against this old approach, Beauvoir marks a tremendous change in this way of thinking: “The situation does not depend on the body; the reverse is true.” It is how we conceive of the body that matters, not the body itself. We have great freedom in how we conceive of the body. Women are mothers because society has made them such. Women are passive sexually because society has made them such. Sex too is socially constructed and human beings, responding creatively to changes in our situation and manipulating the situation itself (e.g., contraception and later genetic engineering) can manufacture a new woman. Women can transcend their fate as the second sex. They can embrace an “indefinitely open future” where they experience genuine freedom and independence from their bodies and from society’s expectations of them. Thus Beauvoir’s feminism points to a life where women and all human beings struggle against anything that might limit their self-determination.

American soil was fertile for planting Beauvoir’s thought because of the ascendency of American Progressivism. The first vehicle for Beauvoir’s thought was Betty Friedan, though Beauvoir influenced other radical feminists as well. This story has rarely been told or understood, and it often gives rise to great confusion in students of American political thought who see the early progressives such as Teddy Roosevelt as pro-traditional family, but the later progressives from the 1960s and beyond as critical of it.

Friedan was a devotee of Beauvoir, as she explains in a prelude to an interview she conducted with Beauvoir in the early 1970s. Evidence of Friedan’s debt to Beauvoir pervades Friedan’s Feminine Mystique (1963) as well. Friedan claims to have been just a simple suburban girl when she stumbled upon Beauvoir’s thought. “It was The Second Sex that introduced me,” Friedan reflected, “to an existentialist approach to reality and political responsibility—that in effect freed me from the rubrics of authoritative ideology and led me to whatever original analysis of women’s existence that I have been able to contribute to the Women’s Movement and its unique politics. . . .When I first read The Second Sex in the early Fifties, I was writing ‘housewife’ on the census blanks, still in the unanalyzed embrace of the feminine mystique.” Beauvoir’s book allegedly awoke Friedan from her feminine slumber and inspired her to write and lead America’s Women’s Movement.

Yet Friedan was not such a simple girl as she leads on. Freidan majored in Psychology at Smith College (Class of 1943) and studied Psychology for a year at the University of California at Berkeley under famed psychoanalyst Erik Erikson. The great revolution in psychology that influenced Friedan the most seems to have been Abraham Maslow’s hierarchy of human needs. References to Maslow’s theory pepper Friedan’s Feminine Mystique. Maslow’s psychology itself seemed to rest on John Dewey’s goals and ambitions. Maslow’s Motivation and Personality (1954) and his related articles laying out his hierarchy of needs integrate, as Maslow writes, “the functionalist tradition” of Dewey with other scientific theories. Let me sketch these connections.

Dewey’s political project, in a nutshell, involved securing the conditions for individual freedom or what he called growth through properly reconstructing the political and social environment with scientific administration. “Growth,” Dewey writes, “is the only moral ‘end.’” Such an end is not a “terminus or limit” but an “ever-enduring process of perfecting, maturing, refining”; there is either “an insipid tedium” and a “millennium of ease in relief from all struggle and labor” or an “active process” of “overcoming obstacles” and fostering growth. Dewey wants the latter.

Growth comes about, in Dewey’s formulation, when politics takes its bearings from the following dictum found in Freedom and Culture (1939): “Find out how all the constituents of our existing culture are operating and then see to it that whenever and wherever needed they be modified in order that the workings may release and fulfill the possibilities of human nature.” Dewey was concerned in his time to reveal how the capitalist economy stifled individual growth, and he thought it necessary to bring private economic enterprises under “social control” to change this.

His dictum has much wider application: cultural forces inhibiting individual growth and liberation must be investigated, judged, and modified with the moral end of growth in mind as well. “The problem of democracy,” as Dewey writes in Liberalism and Social Action (1935), “becomes the problem of that form of social organization, extending to all the areas and ways of living, in which the powers of individuals shall not be merely released from mechanical constraint but shall be fed, sustained and directed.” Once problems associated with material scarcity are solved, problems associated with communal isolation or cultural repression arise. Even after the most successful policies are adopted, individuals experience new obstacles, a differently grounded disdain for the present, and hope for satisfying desires that arise in the new situation. Causes of human discontent are endless, so there can be no limit to the project of social reconstruction directed by scientific administration.

Dewey taught at Columbia in New York from 1905-1930, where his influence was substantial. He especially influenced the psychology, philosophy and teacher education programs. Abraham Maslow studied at Columbia for 18 months in the mid-1930s, where he was mentored by Edward T. Thorndike, who, with Dewey, taught psychology in Columbia’s Teacher’s College since the early 1930s.

Aside from these biographical connections, Dewey’s theories were in the air, shaping politics and the understanding of culture. It is not surprising then that Maslow’s ideas mirror Dewey’s broad philosophical program, though he applied them to what had been known as private life. Maslow’s theory of human motivation holds that once basic needs for nutrition and safety are satisfied, human beings come to need higher things such as belonging or love and esteem and eventually self-actualization. Self-actualization sits at the pinnacle of human motivation. Echoing Dewey, Maslow equates self-actualization with “growth. . . the striving toward health, the quest for identity and autonomy, the yearning for excellence.” Self-actualized people possess “the full use and exploitation of talents, capacities, potentialities” and “good self-confidence, self-assurance, high evaluation of the self, feelings of general capability or superiority, and lack of shyness, timidity, self-consciousness or embarrassment.”

Maslow shows that achieving self-actualization requires “giving up a simpler and easier and less effortful life” as a mother and wife “in exchange for a more demanding, more difficult life” pursuing a larger mission “concerned with the good of mankind.” Most women could not aspire to this condition because they followed gender scripts that prevented them from the highest levels of human happiness. A fully developed woman would strive “beyond femaleness to the full humanness she shares with males.”

Friedan endorsed Maslow’s analysis of what kept women down. “The core of the problem for women today,” Friedan contends, “is a problem of identity—a stunting or evasion of growth that is perpetuated by the feminine mystique.” Friedan sees self-actualized people moving “beyond privatism” toward having “some mission in life. . .outside themselves”; enjoying sexual pleasures and orgasms more than others because they have a stronger sense of their own individuality; and loving out of gift love and “spontaneous admiration” instead of a needy love informed by personal dependence. Friedan applies Maslow’s theory and concludes that old gender roles immiserate women and that self-actualized women would be happy.

Friedan thus marks a second wave of progressive political thought, as progressives turn their focus from reconstruction of the economy (as in Dewey’s day) to the reconstruction of major cultural institutions such as the workplace, marriage, and the family and bringing forth a new kind of self-actualized human being/woman. Nothing in Dewey’s announced program to extend progressive reform “to all the areas and ways of living” resists Friedan’s effort to apply it to marriage and family life. The task for psychiatrists, lawyers, parents, government generally, and educators will be to ensure that no individual is forced to conform to society’s preconceived notions of proper living and all individuals are free to choose their own identities apart from their sex.

THE KEY INSTITUTION FOR SECURING THE GOALS OF SECOND WAVE FEMINISM AND SECOND WAVE PROGRESSIVISM WOULD BE THE UNIVERSITY.

Beauvoir’s way of separating sex and gender came to America as Maslow published his advanced thoughts on self-actualization. Both modes of thinking envision an indefinitely open future for women, one where women can grow free from prevailing notions of gender and from the influence of their bodies.

The key institution for securing the goals of second wave feminism and second wave progressivism would be the university. Universities, armed with scientific techniques, are charged with identifying persisting sources of cultural oppression and imagining ways in which they could be overcome or reimagined. Feminist, progressive thinkers after Friedan articulated the areas of study and research that scientific administration should focus on. It makes for a rolling revolution through America’s cultural, educational, and governmental institutions.

Scott Yenor is Professor of Political Science at Boise State University and was 2015-2016 Visiting Fellow in American Political Thought in the B. Kenneth Simon Center for Principles and Politics at The Heritage Foundation. He is the author of Family Politics: The Idea of Marriage in Modern Political Thought (Baylor 2011) and Hume’s Humanity: The Philosophy of Common Life and Its Limits (Palgrave 2016).