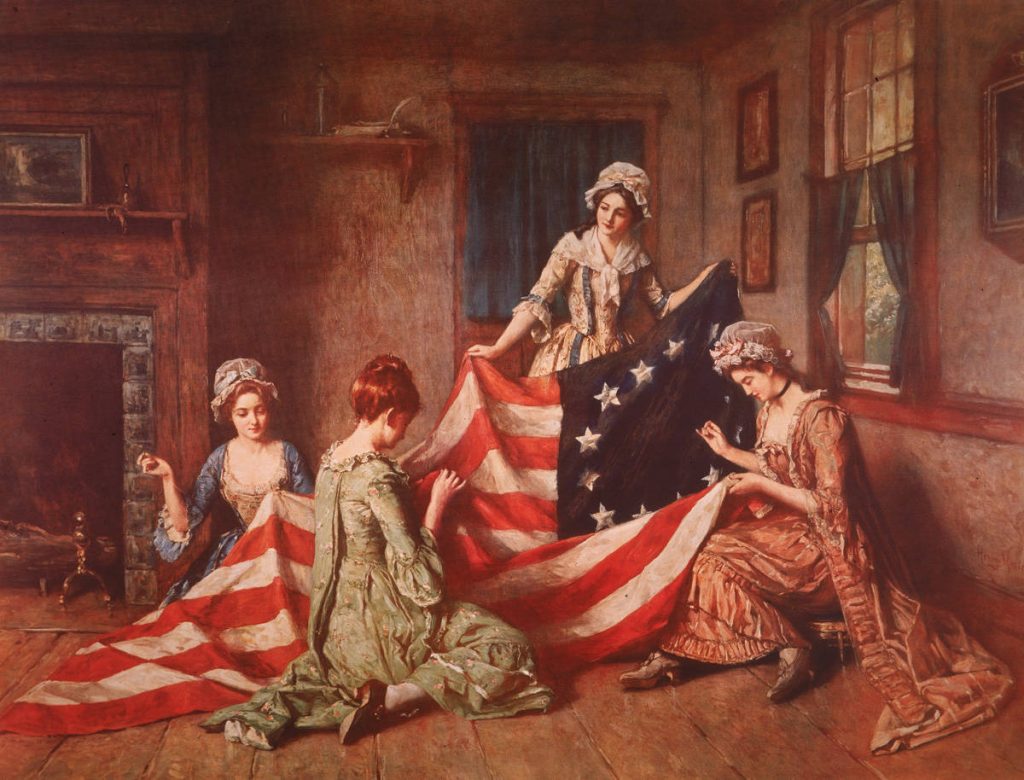 Much has changed for American mothers over the past two hundred and forty-one years, but like the mothers who preceded us, we’re raising children. We’re making citizens. We’re perpetuating the project of 1776.

A popular American anecdote describes a usually unnamed Philadelphia lady questioning Benjamin Franklin on the street outside Independence Hall in September of 1787 about the work that had taken place inside over the previous four months: “What have we got, Dr. Franklin? A republic or a monarchy?” Elizabeth Willing Powel asked regarding the newly drafted Constitution. Franklin replied famously and without hesitation: “A republic, madam…if you can keep it!” The story reminds us that the republican form demands from citizens much learning, spiritedness, self-sacrifice, and vigilance. We might also understand the tale as offering a lesson regarding the essential role of women in perpetuating the republic. Isn’t it possible that in his answer to Mrs. Powel, Franklin meant to imply that though the fathers had given us a republic in its formal structures, only our mothers would be able to sustain it?

The founders acknowledged in many places that America would not know lasting liberty if her citizens did not know virtue. At the Virginia ratifying convention in 1788 James Madison asked, “Is there no virtue among us?” He answered: “If there be not, we are in a wretched situation. No theoretical checks, no form of government, can render us secure. To suppose that any form of government will secure liberty or happiness without any virtue in the people is a chimerical idea.” The project of the framers would rely on the kinds of virtues that direct citizens toward right thinking and right action. Qualities of the soul such as industry, frugality, moderation, benevolence, courage, prudence, wisdom, and justice would be required for civic life. To maintain self-government at the public level, the framers knew, the American people would need to govern themselves at the individual level.

ISN’T IT POSSIBLE THAT IN HIS ANSWER TO MRS. POWEL, FRANKLIN MEANT TO IMPLY THAT THOUGH THE FATHERS HAD GIVEN US A REPUBLIC IN ITS FORMAL STRUCTURES, ONLY OUR MOTHERS WOULD BE ABLE TO SUSTAIN IT?

Certainly, a public school system, a rich network of voluntary associations, churches, and the laws would help in the formation of good republicans, but because of the innately pedagogic relationship between mother and child, the heavy-lifting of habituation—of character education—would fall naturally to America’s mothers, our first and most forceful teachers of virtue.

The poet and early education reformer Lydia Sigourney explained this logic, writing that a child’s mother is “first in point of precedence [and] in degree of power in the faculty of teaching” so that “in power over her pupil,” a mother is “limitless and without competitor.” American mothers would instill in their children the habits needed to live well—the manners and skills that would enable them to live as free citizens.

It occurs to me now, as I mother my own children, that American women actually do this. For most of us, our mothers are our earliest and principal teachers, and from birth onward, mother-child interactions are almost entirely educatory in nature.

As I’ve been considering this, I’ve noticed that nearly everything I do with my kids and practically everything I say to and around them is aimed at readying them to participate in political life. Every time I beseech my son to pick up his room, I’m hoping to instill in him self-reliance. It is with industriousness and independence in mind that I encourage him to pour his own glass of milk. When I counsel him against a second (or third) cupcake, I’m hoping to inculcate moderation. When I admonish him against hurtful language, I’m impressing upon him the importance of civility. My two-year-old daughter becomes more familiar with justice each time I encourage her to offer her sweet “saw-ree” to her brother for a painful pinch she’s inflicted, and she is learning courage as I urge her to venture down the playground slide by herself with no hands. When I take the children along with me to the polls on Election Day or to volunteer at a charity event or to help set-up for a church function, I’m trying to foster in them a civic spirit. I’m trying to teach them the importance of lending our time and abilities to the common good.

I’ve realized that, without really aiming at it, I’ve been trying to make my kids into good republicans. American mothers have always excelled at this, and we’ve always had a natural and primary political significance.

THOSE WHO MOTHERS ARE EQUIPPING AMERICAN CHILDREN FOR SELF-GOVERNMENT, INSTILLING IN THEM THE VIRTUES THEY’LL NEED TO KEEP OUR COUNTRY ANSWERABLE TO ITS HIGHEST ENDS.

It’s usually in the course of studying the lives of remarkable women of the founding whose efforts influenced the American project that we run into the phrase “mothers of the republic.” We learn about the sister of James Otis and mother of five sons, Mercy Warren, a prominent writer of poetry, plays, history, politics, and moral philosophy whose work made the case for revolution. We’re reminded that in anticipation of American independence, Abigail Adams threatened female rebellion if John and his cohort failed to “remember the ladies” when it came to devising a new code of laws to govern the country. We come across the stories of women like Esther DeBerdt Reed, whose door-to-door fundraising efforts brought in considerable sums for the support of the Continental Army. We meet camp followers like Margaret Corbin, Heroine of the Battle of Fort Washington, who attended to the needs of the troops and even took up arms against the enemy when called upon. We encounter actual female soldiers, like Deborah Samson, who disguised herself as a man in order to fight for independence.

These women are the mothers of our republic. They gave it birth and nourished it through infancy. These women understood that their commitment to the continued success of the Revolution included raising America’s first natural-born citizens. It meant transmitting the regime by rearing good children and keeping their households in order. American mothers of the early republic dedicated themselves to completing the work of the founding, and American mothers of today are still so engaged.

Happily, we have more opportunities available to us than ever before. We are no longer restricted to conversing and writing and influencing our husbands. We needn’t plead for inclusion in political life. We’re voting and running campaigns and winning high public office and fighting for our country. Much has changed for American mothers over the past two hundred and forty-one years, but like the mothers who preceded us, we’re raising children. We’re making citizens. We’re perpetuating the project of 1776. Those who mother are equipping American children for self-government, instilling in them the virtues they’ll need to keep our country answerable to its highest ends.

As Alexis de Tocqueville noted astutely, “There have never been free societies without mores, and it is woman who makes mores.” Neither this assertion nor the image of women as guardians of republican virtue is uncontroversial in contemporary America.

Historian Linda Kerber, though she commended the concept of “republican motherhood” as justifying in early America “an extension of women’s absorption and participation in the civic culture,” has criticized it as insufficient because the republican mother’s “political task was completed within the confines of her family.” Others have been less generous with America’s mothers. Radical second wave feminist Shulamith Firestone, for example, once referred to a woman’s “childbearing and childrearing” qualities as “the heart” of her “oppression.” More recent feminism is divided on motherhood, with some claiming women should have the freedom to choose their own paths (which may include staying home with children instead of joining the workforce) and others insisting that such a choice would be anti-woman, pro-patriarchy, and a veritable slap in the faces of the women who came before.

CAN THERE BE ANY ACCOMPLISHMENT MORE GLORIOUS—ANY SUCCESS GREATER OR ANY DEVOTION MORE FULFILLING—THAN SUSTAINING THIS REPUBLIC?

Current answers to the great question, What is the best life for woman? are varied. On the one hand, those who object to the goal of women’s self-definition becoming entangled with motherhood tend to oppose the maternal requirement that women commit themselves to the advancement of their children rather than or before themselves and their own success and satisfaction. Those who consider motherhood the apogee of female fulfillment, on the other hand, admire the devoted mother’s altruistic familial sacrifices and look on the childless as coldly egocentric. The career-first crowd doubts that motherhood alone can satisfy women and suspects that plenty of self-congratulation hides behind displays of supposed maternal selflessness.

All sides wish to classify motherhood as simply good or bad for women; but at the same time that motherhood is stressful, humbling, terrifying and exhausting, it is wonderful, rewarding and great fun. In America, motherhood is also patriotic, and because American mothers are a vital part of something lasting, important and much bigger than any of us as individuals, we all benefit from motherhood. Can there be any accomplishment more glorious—any success greater or any devotion more fulfilling—than sustaining this republic?

The month of May brings birdsongs and blossoms, verdure and warmth, sunshine and a lightness for which by this page of the calendar we’ve all grown desperate. With its fragrant comforts, May brings our national celebration of all things maternal. Not everyone will celebrate Mothers’ Day, of course, because like most holidays, this one is tinged with sadness for some. For the motherless, for those who wish to be mothers but are not, and for those to whom the kind of motherhood worth celebrating is unfamiliar, this holiday brings something besides joy.

For others, Mothers’ Day is provocative and offensive. It arouses indignation in those unapologetic regarding their desire not to be mothers. It inspires ridicule from those who consider the holiday a commercial swindle. It angers those who think it exclusionary and preferential. It vexes those who find it inadequate and ultimately belittling to mothers, who deserve daily and real acknowledgement rather than a compulsory annual carnation.

Of course, deciding how to spend this day is up to each of us. This year, I’ll take my kids to the cemetery to lay flowers on my mother’s grave. I’ll tell them how my mom taught me right from wrong and always encouraged me to try to see things as they are. I’ll reflect happily on how lucky I am to have grown up under her direction. I’ll take special notice of Mom’s formative importance in my life, and I’ll recognize that whatever good qualities I find in myself I possess mostly because of the efforts of my mother—that whatever contributions I’ve made, she enabled. I will teach my children that it is largely thanks to generations of intelligent, strong, sensible, commanding mothers that we get to partake of the duties and enjoy the blessings of liberty.

On this Mothers’ Day, I will celebrate American mothers as patriots, deserving of genuine gratitude on this and every day. I’ll applaud them not only for having done the laundry and helped with the homework, but also—and especially—for having made us into citizens of the American republic.

Mary Beth McConahey is Assistant Director of the Center for Political and Economic Thought at Saint Vincent College, where she teaches in the Politics Department. She is the author of The City and Sex: Private Vice and Public Scandal in the American Republic (Lexington Books, 2015).