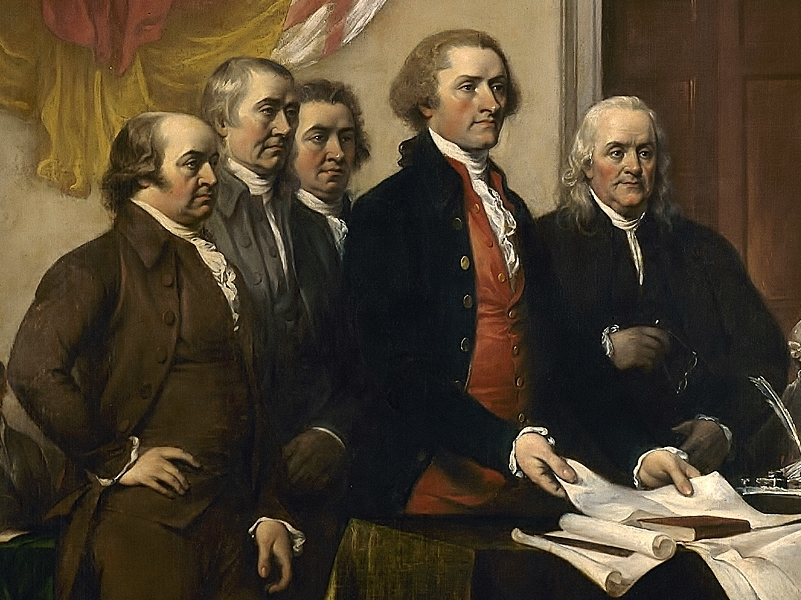 Adam Seagrave’s review of my Political Theory of the American Founding contains both praise and criticism. I will respond here to four of his most important concerns.

DID THE NATURAL RIGHTS THEORY OUTGROW THE FOUNDERS?

I discuss this point first because it suggests that Seagrave and I perhaps disagree not only about the fate of the founders’ political theory in American history, but also about its basic meaning.

Seagrave wishes I had discussed how the “political theory of natural rights” gave rise to “a practical momentum in American history, building to the conclusion of racial equality in natural rights and civil rights over the course of the next two centuries.”

I did not examine post-founding developments in Political Theory because that is not what the book is about. But I will use this occasion to say something about that here. In my opinion, Americans have less effective protection of their natural rights today than they did in the period between the founding and the 1960s. Contrary to Seagrave’s optimistic take on “racial equality,” I would argue that we have turned our back on the founders’ ideal of liberty and justice in important ways. (I am assuming that when Seagrave speaks of “the next two centuries,” he means to include developments after 1960).

Our view of civil rights today is in many ways the opposite of the founders’. The protection of citizens by enforcement of criminal laws – a fundamental civil right in the founding and in the 14th Amendment – has almost been abandoned in many places. As I mention briefly in chapter 7 of Political Theory, rapes, murders, and thefts often go uninvestigated and unpunished today in cities such as Houston, Detroit, and Memphis. The founders defined justice as the protection of the natural rights of every American citizen equally. Today, we define justice as the transfer of wealth, privilege, and honors from the “advantaged” to the “disadvantaged.” We do make one exception: great wealth and honor may justly be possessed by academic, corporate, journalistic, and political elites, because they use their superior status on behalf of the least advantaged.

In our legal system, the term “protected class” refers to groups designated as victims or underprivileged, such as women, minorities, LGBT, and the disabled. In the founding, every American citizen belonged to the “protected class” for which the social compact is established. The founders would have regarded the exclusion of whites, males, the non-disabled, and married people from the category of “protected classes” not as an advance in the protection of civil rights, but as a decline.

The founders believed that the protection of men, women, and children from hunger and violence, and the proper upbringing of children, depend in part on the integrity of marriage and the family. Beginning in the 1960s, our laws have abolished marriage as a meaningful legal contract. In the founding, husbands and wives had important rights and duties, and divorce was only available for serious misbehavior of a spouse (chapter 10 of Political Theory). Today, the older “marriage model” for raising and caring for children has been replaced by a “child support model.” Marriage can now be dissolved at the whim of either partner, and government mandates child support whether or not the parents were ever married. Marriage loses its significance when the mother knows she will probably receive custody and child support if she expels the father from the house.

Likewise, in the founders’ natural rights republic, the purpose of foreign policy is to preserve the lives, liberties, and property of Americans by fighting wars for defensive purposes only, but otherwise to leave the rest of the world alone. Today, American troops are stationed in over 150 countries, and our government undertakes to dictate the internal policies of every country in the world. Any country that fails to advance the interests of nonwhites, women, and LGBT is liable to be pressured into submission by means of hectoring, monetary incentives, trade sanctions, or military intervention.

Finally, the founders tried to establish government by the consent of the governed. Today, decisions previously made by elected officials are increasingly delegated to courts or bureaucracies. As government becomes ever more intrusive into the details of private life, elections matter less than ever in the direction of public policy. As political scientist Sidney Milkis observes, commenting on the liberal reforms of the 1960s and 70s, “It is ironic and tragic that the resulting triumph of administrative politics, designed to strengthen citizen action, signified instead the deterioration of representative democracy.”

In light of these developments, I wonder why Seagrave seems to think that the trajectory of the natural rights doctrine has been toward its fulfillment and completion. Perhaps he disagrees with the founders on the meaning of that doctrine.

NATURAL RIGHTS ARE NOT MORAL ABSOLUTES

Seagrave objects: “‘Justice,’ by itself, already includes the weighing of the natural right to liberty of the slave against the presumptive natural rights of slaveholders. ‘Self-preservation’ here is … a felt desire, a personal interest, or a selfish instinct.”

I cannot accept Seagrave’s suggestion that self-preservation is not a natural right in this case. Self-preservation is always a natural right. It is the right to life. Seagrave is correct to say that the desire to preserve one’s life is a matter of one’s “personal interest,” but so too is the slaves’ desire for liberty. The slaves have a right to kill their owners, which would deny their right to life, as Jefferson freely admits in Notes on Virginia. And the slaveowners have a right to defend themselves against violence, even if that defense denies the slaves’ right to liberty.

Perhaps I can persuade Seagrave by referring to a similar case in Thomas Aquinas, an author he admires. Aquinas acknowledges, with the founders, that the natural law mandates “those things … through which the life of a human being is preserved.” Aquinas also agrees with the founders that sometimes the only way to preserve one’s own life is to take the life of another. When I kill someone in self-defense, I obey the first precept of the natural law by preserving myself, but I thereby violate the prohibition against killing that the natural law would ordinarily require. To kill for “the saving of one’s life” is permissible, says Aquinas, because “it is natural to everything to keep itself in being as far as possible.”

Seagrave says that a natural right to preserve oneself by violating someone else’s natural right would “make the political theory of the American founding incoherent at least on this particular point. If natural rights can conflict in this way, they can’t be moral rights that carry any obligation to respect.” I regard Seagrave’s conclusion as morally naive. Dilemmas of this kind are an unavoidable part of life.

DID THE FOUNDERS DERIVE NATURAL RIGHTS FROM A CONSIDERATION OF THE CONDITIONS OF HUMAN WELL-BEING?

It appears that Seagrave and I have a serious disagreement about what the founders thought was the rational basis of their political theory.

He doubts that I am correct when I describe the founders’ “natural right to property” as “a sound practical substitute for a complex chain of reasoning showing that property rights are indispensable for human well-being.” He is quoting from a chapter late in the book, but I discuss this kind of argument thematically in the earlier chapter 4. I provide plenty of evidence there that “the relation and fitness of things” – their “fitness” for “human well-being” – was the most common way by which the founders explained the rational basis of the laws of nature and natural rights.

And why is the founders’ derivation “unpromising”? Is it because Seagrave is looking for moral absolutes in the founding? I showed in my earlier discussion of the possible conflict of natural rights why a political theory of moral absolutes is “unpromising.” See also my response to Peter Myers.

Throughout the book, I was careful to avoid making claims about which European thinker or tradition might have been the source of this or that idea in the founding. In fact, as Philip Hamburger and others have observed, the founders were quite eclectic in their use of philosophers and writers they admired. Some founders, as I discussed in chapter 4, were fond of the idea of an innate “moral sense” as the basis of natural law. Locke denied the existence of a moral sense, but some Scottish philosophers, such as Thomas Reid, defended it. The English political theorist William Paley has an extended account of the natural law basis of marriage. As far as I can tell, the founders who wrote about marriage were closer to Paley than Locke. It would certainly be a mistake to assume that everything in the founders’ political thought must be understood within a Lockean framework.

Seagrave says my explanation of natural rights is “stronger on the American founding side than on the political theory side.” In other words, I am a pretty good historian but not so good as political theorist. I think I have responded to that claim effectively enough. Besides, Seagrave’s distinction between “the founding” and “political theory” carries no weight here, because my book is an overview of the arguments of the founders themselves.

WHICH COMES FIRST: THE RIGHT TO LIFE? OR, ALL MEN ARE BY NATURE EQUALLY FREE?

There is evidence to support both Seagrave and myself on this point. I explain in Political Theory that when the founders stated their principles in public documents, they typically began with some version of “all men are created equal,” which they understood as the claim that human beings are “by nature equally free and independent” (VA Bill of Rights), “born equally free and independent” (PA), or “born free and equal (MA). Only after that statement do the various bills of rights list the natural rights of life, liberty, property, etc. My explanation is this: “If all are ‘born free and equal,’ and if no one is entitled to take that freedom away, that means everyone is rightfully free of the violence of others. Murder being the worst kind of violence, life is the first or most urgent natural right. Expressed in the law of nature language that the founders sometimes used, ‘the law of self-preservation … is the first law of nature.’”

In other words, in the most authoritative pronouncements, “born free and equal” i.e., born with a natural right to equal liberty, is presented as the basis of the natural rights that follow. In that sense liberty comes first. That is why Lincoln could rightly say that for Americans, it is not the right to life, but rather the idea that “all men are created equal” that is “the father of all moral principle in them.” But Seagrave is right that in another sense life comes first, which is why I state that it could be considered “the first or most urgent natural right.”

Thomas G. West holds the Potter Endowed Professorship in Politics at Hillsdale College. He is the author of The Political Theory of the American Founding: Natural Rights, Public Policy, and the Moral Conditions of Freedom (Cambridge University Press); of Vindicating the Founders: Race, Sex, Class, and Justice in the Origins of America (Rowman and Littlefield); and of Plato’s Apology of Socrates: An Interpretation (Cornell University Press).