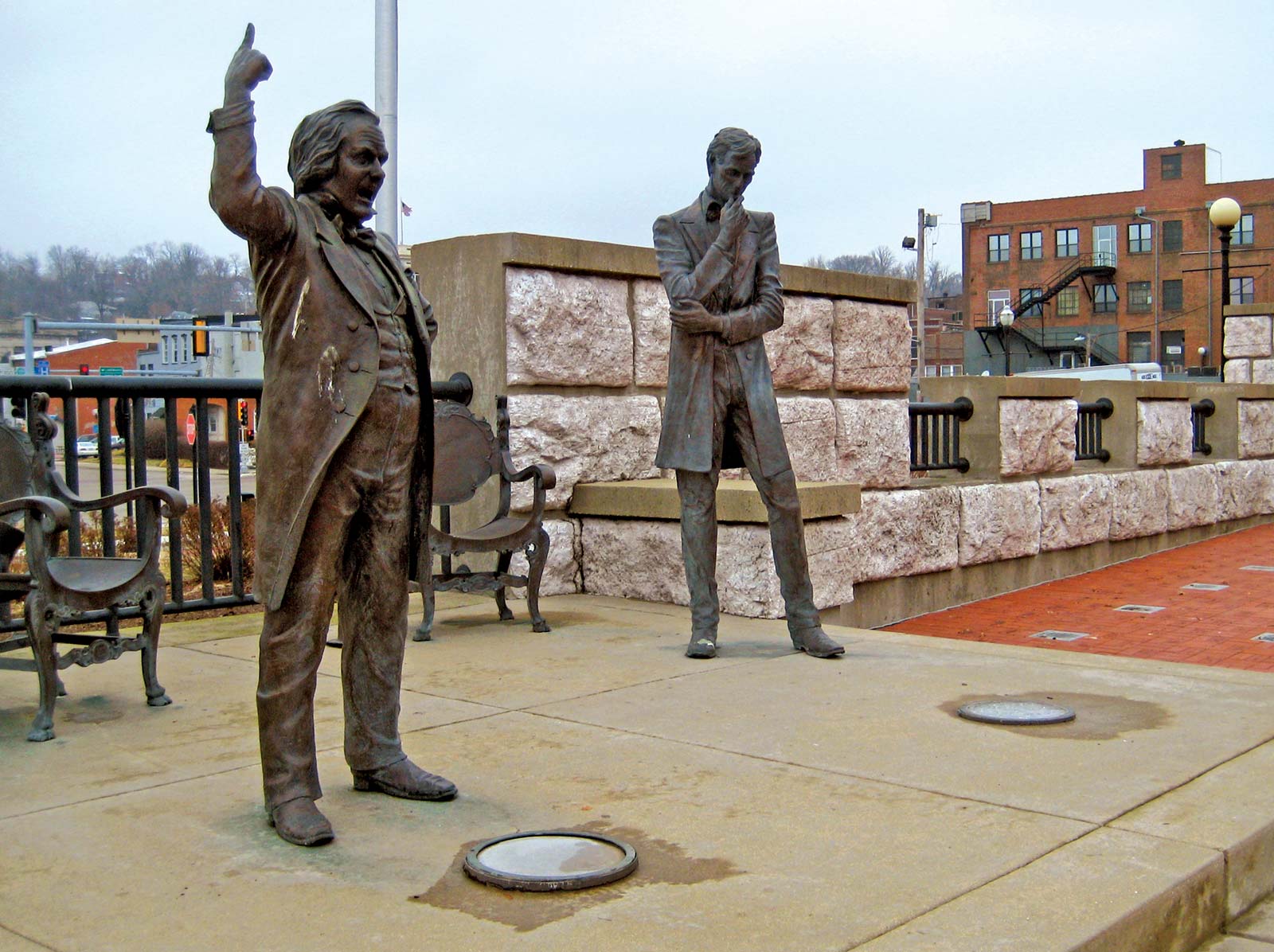 Abraham Lincoln’s fame in the 1850s owed mainly to his provoking a public quarrel with Democratic Senator Stephen A. Douglas over the correct interpretation of the American founders.  As the nation grew increasingly divided over the future of slavery, Lincoln and the new Republican Party sought to prevent the expansion of slavery into federal territories in hopes of seeing slavery “placed where our fathers originally placed it,” which meant “placed in the course of ultimate extinction.”

Douglas, the leading Democrat of that tumultuous decade, disputed Lincoln’s claim, and believed his reading of the founding offered a solution that could keep the American union together.  “I believe that the Union can only be preserved by maintaining inviolate the Constitution of the United States as our fathers have made it.  That Constitution guarantees to the people of every State the right to have slavery or not have it; to have negroes or not have them… each State being left free to decide for itself.”  Their debate over the founders and slavery would become the most consequential political question of the 19th century.

In his first formal debate with Lincoln on August 21, 1858, Douglas appealed to “our fathers” to dispute Lincoln’s claim that the founders intended the demise of slavery in America.  Douglas claimed the mantle of Washington and “the framers of this government” for his doctrine of popular sovereignty, “recognizing the right of each State to do as it pleased,” including whether or not to enslave black people.  He claimed to draw his policy of popular sovereignty from the leading statesmen of the Revolution and early republic, who respected what Douglas called the “diversity” of the American states by not insisting they become all free or all slave states.  As he read the founding era, the American colonists declared and secured independence from Great Britain without abolishing slavery.  They then strengthened their union by adopting a federal constitution that did not abolish slavery throughout every state.  Douglas inferred that they did not intend that slavery be abolished in either the near or long term: “Washington, Jefferson, Franklin, Madison, Hamilton, Jay, and the great men of that day made this Government divided into free States and slave States, and left each State perfectly free to do as it pleased on the subject of slavery.  Why can it not exist on the same principles on which our fathers made it?”  He would repeat this appeal to the nation’s “fathers” in subsequent debates that fall, declaring, “I stand by the constitution as our fathers made it.”  While Lincoln agreed to stand by the Constitution, including its inability to abolish slavery where it already existed in the states, he believed the federal government could and did treat slavery as a moral evil.

As evidence, Lincoln pointed to the 1820 Missouri Compromise, when Congress accepted Missouri as a slave state but banned slavery from the remaining territory above the 36°30′ parallel.  When Douglas led the passage of the 1854 Kansas-Nebraska Act, which permitted local settlers to decide if they would allow slavery or not, Lincoln condemned the statute for allowing the possibility of slavery’s expansion into territory where the 1820 Missouri Compromise had declared “slavery and involuntary servitude…  forever prohibited.”  The law enshrined Douglas’s policy of local “popular sovereignty” or “congressional non-intervention.”  Lincoln found the Act defective on a number of counts, but emphasized its moral deficiency in applying a principle of “declared indifference” to the prospect of slavery’s extension into federal territories.

Popular sovereignty as defined by Douglas appeared indifferent or neutral on the slavery question because it neither endorsed nor banned the enslavement of black people.  Lincoln called attention to this bowdlerized notion of popular sovereignty and characterized Douglas’s rhetoric as a “gradual and steady debauching of public opinion.”  By allowing white people the option of enslaving black people, popular sovereignty implied “that there is no right principle of action but self-interest.”  To the contrary, Lincoln believed the Declaration of Independence taught “that there can be no moral right in connection with one man’s making a slave of another.”  He added that “no man is good enough to govern another man, without that other’s consent.  I say this is the leading principle—the sheet anchor of American republicanism.”  Douglas’s definition of popular sovereignty corrupted the true principle of consent.

That corruption manifested itself throughout the 1858 debates as Douglas claimed that “this government was made by our fathers on the white basis.”  In language foreshadowing that of segregationist Governor George Wallace over a century later (“I say… segregation now… segregation tomorrow… segregation forever”), Douglas declared, “It was made by white men for the benefit of white men and their posterity forever, and was intended to be administered by white men in all time to come.”  Popular sovereignty denied the consent of black people, for Douglas considered them (and all other non-white races) an inferior race.  To argue otherwise, especially with regards to the opinion of the “signers of the Declaration of Independence,” would be, as Douglas put it, “a monstrous heresy.”

Douglas hastened to add that whites should not abuse their authority over blacks but regulate their conduct consistent with the welfare of the local community: “humanity and Christianity both require that the negro shall have and enjoy every right, every privilege, and every immunity consistent with the safety of the society in which he lives.”  But he reiterated that the rights that blacks should have protected was “a question which each State and each Territory must decide for itself.”  Douglas answered for Illinois: “We have provided that the negro shall not be a slave, and we have also provided that he shall not be a citizen, but protect him in his civil rights, in his life, his person and his property, only depriving him of all political rights whatsoever, and refusing to put him on an equality with the white man.”  Not the natural rights possessed by all human beings, antecedent to the establishment of government, but mere legal positivism practiced by white people would determine what so-called inferior races would enjoy under state and territorial governments.

For his part, Lincoln tried to show white Illinoisans that they would undermine their own right to be ruled by their consent if they allowed white settlers in Kansas to enslave black people.  The exercise of majority political might against the black minority in Illinois defied the noblest ideals of America, and could prove down the road to be a double-edged sword: “And when you have stricken down the principles of the Declaration of Independence, and thereby consigned the negro to hopeless and eternal bondage, are you quite sure that the demon will not turn and rend you?”  Lincoln thought “the bulwark of our own liberty and independence” was not arms or soldiers but an idea, a timeless, universal truth: “Our reliance is in the love of liberty which God has planted in our bosoms.  Our defense is in the preservation of the spirit which prizes liberty as the heritage of all men, in all lands, everywhere.”

The key to the protection of the rights of whites in America depended upon their conviction that it belonged to all human beings.  For Lincoln that meant shoring up the belief in the humanity of blacks.  In doing so for those considered the least and most vulnerable in their community, white Americans would accustom themselves to protecting the rights of any who find themselves outnumbered in the political process and hence vulnerable to the majority in power.  As Thomas Jefferson explained in his First Inaugural Address in 1801, “though the will of the majority is in all cases to prevail, that will, to be rightful, must be reasonable; that the minority possess their equal rights, which equal laws must protect, and to violate would be oppression.”  Minority rights are precisely those rights possessed equally by the majority—the rights of the individual.  By standing up for the individual rights of black Americans, Lincoln was teaching white Americans how to defend their own rights.

By 1859, Lincoln considered Douglas “the most dangerous enemy of liberty, because [he was] the most insidious one.”  The insidious aspect of Douglas’s rhetoric owed to his repeated claim of indifference towards the spread of slavery, by which he meant the enslavement of black people.  Lincoln’s hatred towards Douglas’s indifference regarding slavery was not simply because slavery was clearly wrong.  (“If slavery is not wrong, nothing is wrong,” Lincoln wrote late in the war.)  He hated indifference towards the pernicious institution because slavery would not need a positive argument to promote its advancement.  Convince northern whites not to care what happens to black people in the federal territories, and slavery would expand as far as majority self-interest could carry it.  Popular sovereignty so-called would then represent not a natural right to choose one’s rulers but a mere legal right whose security depended solely on the majority will of the people.

A year before the 1860 elections, Douglas was the anticipated Democratic nominee and likely next president.  Lincoln therefore argued that the most urgent need was not to refute southern slave-owners but to thwart Douglas’s efforts to get northern non-slave-owners to become indifferent to the potential enslavement of blacks in the federal territories.  “I said that this insidious Douglas popular sovereignty is the measure that now threatens the purpose of the Republican Party, to prevent slavery from being nationalized in the United States.”  Lincoln argued that Douglas’s perversion of true popular sovereignty needed to be the chief target of the Republican Party to avoid the eventual acceptance of a “congressional slave code, for the territories, and the revival of the African trade and a second Dred Scott decision.”  He went on to remark, “Douglas’ position leads to the nationalization of Slavery as surely as does that of Jeff. Davis and Mason of Virginia.  The two positions are but slightly different roads to the same place—with this difference, that the nationalization of slavery can be reached by Douglas’ route, and never can by the other.”  Lincoln showed that if popular sovereignty became accepted in the North, it wouldn’t be long before politicians argued for the repeal of the ban on the importation of slaves, there being no principled difference between white Americans buying slaves domestically and buying them from abroad—“wherever they can buy them cheapest.”

In February of the fateful presidential year of 1860, Lincoln exhorted the nation to “have faith that right makes might,” and took a momentous step towards securing the Republican nomination in May that year, and ultimately the presidency.  But for his efforts to spell out the implications of Douglas’s “don’t care” policy regarding slavery in the territories, the nation would have taken a decided turn towards the nationalization of slavery.  Douglas’s own attempt to forestall secession doubled down on his unabashed white supremacy, culminating in several Christmas eve proposals to amend the Constitution, which included the following proposed 14th Amendment: “The elective franchise and the right to hold office, whether federal, State, territorial, or municipal, shall not be exercised by persons of the African race, in whole or in part” (S.R. 52, Article XIV, Sec. 1, 36th Congress, 2d Session).  Douglas read his own racial bigotry into the founding of the United States.  Lincoln refuted this reading of the fathers of the American republic.  By recalling the universal principles of the Declaration of Independence to the public mind, he not only helped to save the Union, but to so save it, “as to make, and to keep it, forever worthy of the saving.”

Lucas Morel is the John K. Boardman, Jr. Professor of Politics and Head of the Politics Department at Washington and Lee University. His most recent book is Lincoln and the American Founding, which was published as part of the Concise Lincoln Library of Southern Illinois University Press in 2020.