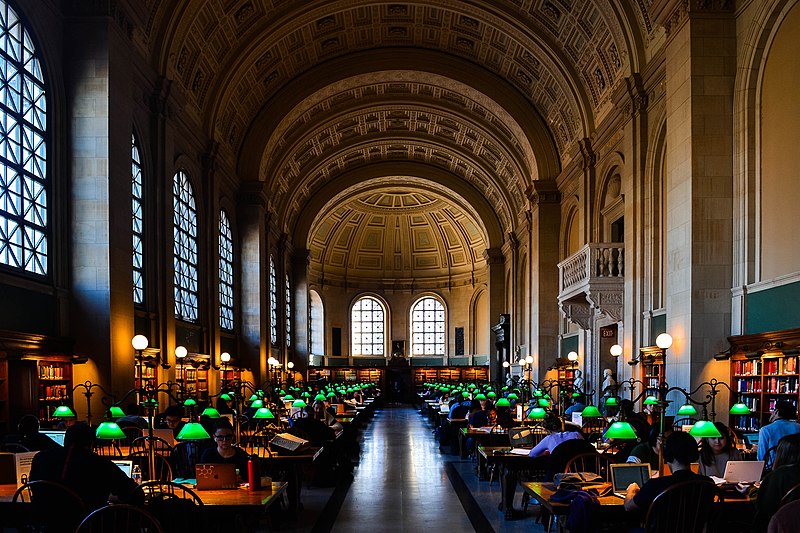 It becomes expedient for promoting the publick happiness that those persons, whom nature hath endowed with genius and virtue, should be rendered by liberal education worthy to receive, and able to guard the sacred deposit of the rights and liberties of their fellow citizens, and that they should be called to that charge without regard to wealth, birth or other accidental condition or circumstance.
– Thomas Jefferson, a Bill for the More General Diffusion of Knowledge, Section I

The greatest President of the United States understood that a liberal education and a free society are two sides of the same coin. One cannot exist without the other. In the novus ordo seclorum that Thomas Jefferson helped to construct, social and political stability would not arise from a communal belief in the divine right of kings, a state religion, or the behind-the-scenes wheeling and dealing of a few powerful men. Gone were the days of systematic state oppression of free thought, free speech, and the unfettered pursuit of happiness. A new world order had come into being. In this world, the people would reign supreme, govern their own affairs, and live their lives as they saw fit. They would do so in the midst of an intellectual culture that encouraged them to debate the pressing social, cultural, and political issues of the day. This essay illustrates what President Jefferson knew long ago: that a free society cannot endure without liberal education, and that the study of history, as philosophical and moral training, is necessary to cultivate a virtuous citizenry.

True, this free and virtuous society was merely an abstract ideal for many—slaves, women, the landless poor—who were not at first granted access to the fruits of the social compact brokered in America from 1776-1789. It would take many generations of struggle for the ideals of freedom and equal rights to become a reality for all Americans. Well, almost all Americans.

Even today, our free society, bolstered by an unfailing commitment to liberal education, is a work in progress. In our efforts to make good on the noble promises of our ancestors and to forge our own paths forward into the great unknown, American citizens must remain committed to the pursuit of truth in a free and open marketplace of ideas, not just in institutions of higher education, but in our everyday lives. For a true liberal education cannot be contained within the walls of universities or primary and secondary schools. It is a commitment by all free citizens to lifelong learning, reasoned debate, and the tireless defense of the principles of freedom (e.g., the rule of law, separation of powers, separation of church and state, and the freedom of speech) that have laid the groundwork for unprecedented moral and material prosperity in the West.

Liberal education is the preservation, production, and promotion of useful knowledge for the public and private good. While Jefferson emphasized in his proposal for educational reform only the “publick” utility of knowledge for the creation of a stable and free society, useful knowledge also grants to its practitioners an elevation of their physical bodies, minds, and spirits, and assists them in making reasonable life choices. It transforms them into virtuous citizens who recognize the benefits of both republicanism and liberalism—of individual sacrifice for the common good and the individual pursuit of happiness—and how to manage the productive tension that these two ideals create. Free thinking, therefore, has no drawbacks if properly understood. It is healthy for the individual and for society at large.

Although liberal education incorporates all kinds of knowledge—the reason-oriented natural sciences, social sciences and humanities—the most useful for inculcating civic virtues is the study of history. A thoroughgoing, sober study of history, both ancient and modern, provides examples of virtues and vices that we can choose either to imitate or to avoid. The Greek and Roman historians knew this, and so did the most insightful thinkers of the Renaissance and the Enlightenment. Bolingbroke, the eighteenth-century English politician and political philosopher, encapsulated this classical notion best when he wrote that “history is philosophy teaching by examples.” In history, we discern patterns in human behavior that reflect the strengths and weaknesses of human nature. This understanding of history is dependent upon civic humanist and Enlightenment beliefs in the constancy of human nature across time and space and the cyclical nature of the past. Empires, like organic beings, are born, develop into adolescence, thrive during their prime adulthood, and finally decay into fragile senility, forgetful of their former glory and virtue.

Tried and tested as this interpretation of history over the longue durée is, it has fallen out of favor among academics in the humanities who espouse postmodernism, a theoretical system that rejects grand narratives and claims to objective truth and replaces them with impenetrable sophistry and nihilism. Postmodernists would have us believe that historical and literary scholarship grounded in classical and Enlightenment ideals is unsophisticated at best, and ethnocentric at worst. Such myopic, ill-conceived, anachronistic dismissals of the use of reason and logic in pursuit of universal truths are harmful to intellectual life at universities and the societies over which they exert influence.

Such brilliant and insightful humanists as Niccolò Machiavelli would be disappointed in this recent development in pedagogy away from evidence-based reasoning. In 1531, he wrote in the preface to his Discourses on Livy,

seeing that the most virtuous enterprises the histories show us to have been carried out in ancient kingdoms and republics by kings, generals, citizens, lawgivers, and others who have labored for their native lands are praised with astonishment rather than imitated…I cannot be but both amazed and saddened.

Machiavelli’s contemporaries were reading history as light entertainment, not as the key to understanding how to govern well and how to become virtuous citizens. Without taking accounts of the past seriously and acting upon that knowledge, they would never gain insight into the arcana imperii, the secrets of empire, or human nature. So much the worse for them! As Machiavelli knew, history is the nursery of future statesmen, leaders, and virtuous citizens. Humans are, and always have been, imitative creatures; we learn by example. By serving as a mirror for the present, history enlarges our intellectual horizons, opens our eyes to our awe-inspiring capacity for both good and evil, and encourages problem solving and critical thinking about the past as we look to create a freer world for the future.

Now, let me hasten to add that I do not promote a slavish imitation of history and precedent. Unlike the ancient Romans, I do not worship my ancestors and follow their example in every respect. Nor do I dismiss them out of hand. To make progress, we must give free space to those individuals who choose to dispense with or defy ancestral traditions in order to think in non-linear ways and to invent new modes of thought and new ways of being in the world. In some cases, we must overcome our tendency to adhere to current societal norms. Since we are all too often prompted to action by mimetic impulses, we would do well to consume as much history as possible while ensuring that we bring to bear our own critical thinking skills and a recognition of changed circumstances and societal needs before acting on our knowledge.

How, then, can we know which historical examples to imitate and which to avoid? How can we know how and when to act? These are tough questions with no easy answers, but one thing, as Jefferson suggested, is certain: they are best contemplated, discussed, and resolved within the free marketplace of ideas. As Jefferson wrote in his Second Inaugural Address,

Nor was it uninteresting to the world, that an experiment should be fairly and fully made, whether freedom of discussion, unaided by power, is not sufficient for the propagation and protection of truth…The experiment has been tried; you have witnessed the scene; our fellow citizens have looked on, cool and collected… and when the constitution called them to the decision by suffrage, they pronounced their verdict, honorable to those who had served them, and consolatory to the friend of man, who believes he may be intrusted with his own affairs.

Without a high level of reasoned public discourse, best promoted and preserved by liberal education, citizens in a free society neglect to cultivate the values and principles that made them free in the first place: freedom of speech, freedom of conscience, diversity of thought, equal protection under the law, civilian control of the military, separation of powers, popular sovereignty, and so on.

Recent events in American politics, especially the 2016 election cycle and the responses to Donald Trump’s presidency, demonstrate how the diminishment of societal unity can lead to mob violence in the streets; stagnation in technological, spiritual, and philosophical development; and degradation in literature, the arts, and culture at large. Heightened partisanship and outright visceral hatred among America’s two major political parties, the Republicans and Democrats, is the direct result of the lack of a unifying cultural force—religious or secular—to enable American citizens to lay aside their differences in the pursuit of the common good. Despite Tocqueville’s 1830s praise of Americans for their intricate balance of the ideologies of liberalism and republicanism, the American people have since come to embrace liberalism and reject republicanism.

This is an untenable situation. History teaches that when citizens of a free society stop seeking the truth through their use of reason and retain only abstract notions of the common good, they fall prey to the machinations of influential demagogues, who manipulate existing institutions for their own benefit. Take, for example, the fall of the Roman republic. I can think of no better historical analogue to warn us about the dangers of increasing inequality of property among the citizen body, unfettered aristocratic competition, class warfare, loss of the constraints of religion, and lack of civil discourse in the public sphere. By these means, one of the greatest, freest, and most virtuous of all ancient republics fell, at first gradually at the hands of the Gracchi brothers and then very rapidly at the hands of Caesar, and was transformed by the emperor Augustus into a repressive monarchy disguised as a free republic. The Roman historian Tacitus lamented the death of the republic in Annals 1.4:

It was thus an altered world, and of the old, unspoiled Roman character not a trace lingered. Equality was an outworn creed, and all eyes looked to the mandate of the sovereign — with no immediate misgivings, so long as Augustus in the full vigor of his prime upheld himself, his house, and peace.

The Roman people had forgotten what had made them free. They had strayed from the mos maiorum, the customs of their ancestors, which had taught them the importance of sacrifice for the common good and had earned for them honor, glory, fame, freedom, and independence. Under Augustus, they were willing to be slaves to the new monarchical regime, provided that they could avoid more bloodshed. Slavery was the price of sacrificing freedom for security.

While we cannot alter the past, we can learn from it. Renewed commitment to a liberal education with an eye toward strengthening and advancing the fundamental principles that under-gird our free society—a Machiavellian “return to first principles”— has never before been more essential than it is now. Free societies prosper when their citizens are willing to defend their freedom at any cost. An effective defense can come only from those citizens who understand what freedom truly means, as well as the sacrifices that their forebears made to achieve it. A healthy polity must, therefore, recover Thomas Jefferson’s liberal spirit and commitment to liberal education.

Daniel Graves is a fourth-year PhD student in the Classics and History departments at Yale University. His dissertation focuses on the influence of classical literature and ancient history on Thomas Jefferson’s political, cultural, and social thought.