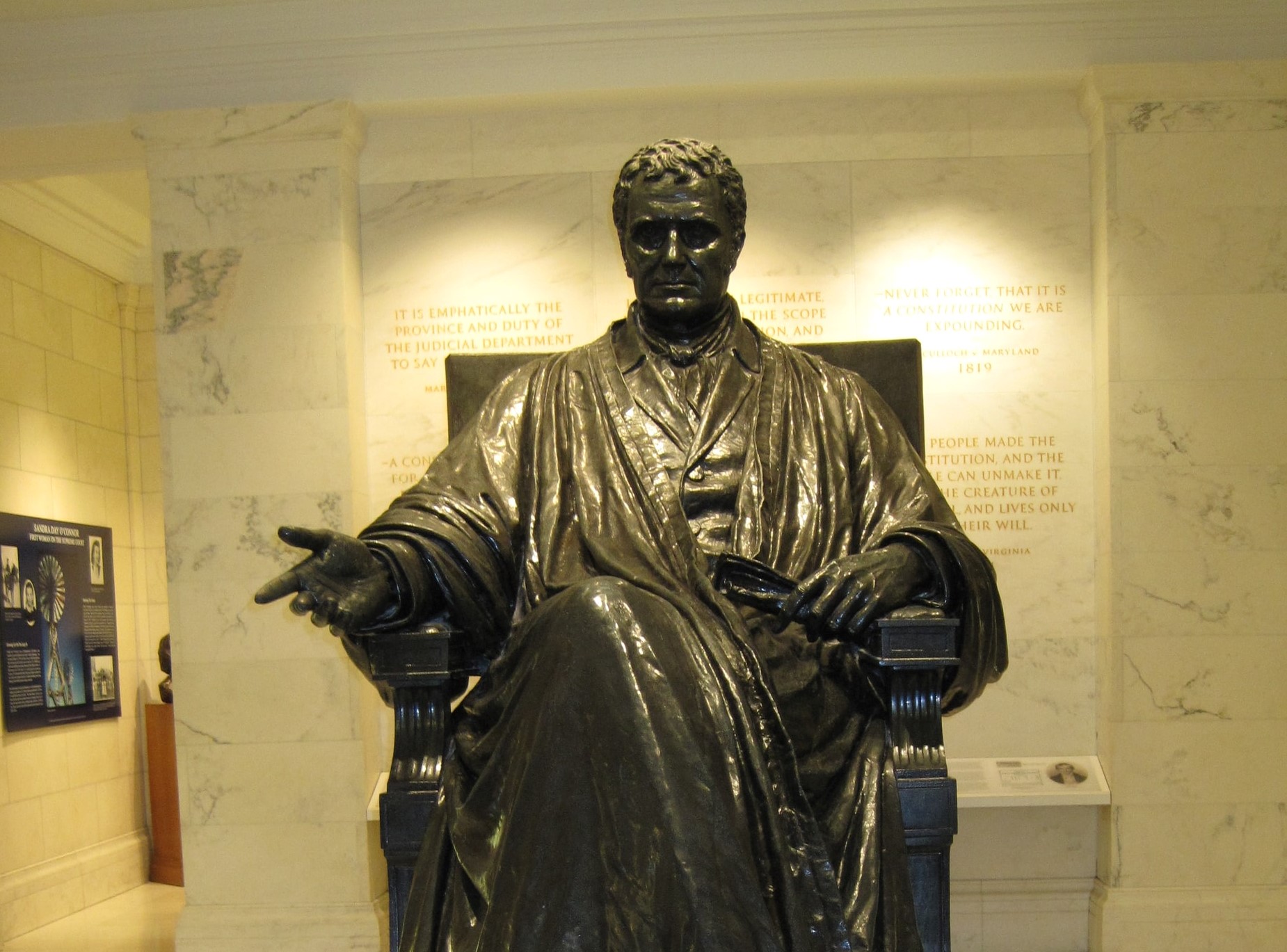 The death of Supreme Court Justice Ruth Bader Ginsburg has rocked the nation. It has inserted the Court, whether they like it or not, into the epicenter of the presidential election. Yet, her passing in the heat of a presidential election crystalizes a deeper problem in American politics: The Supreme Court’s outsized influence in the American tripartite system. For nearly one hundred years, the Court has served up a cornucopia of policy-esque decisions that either overturned state or federal laws or contravened the legislative or amendment processes. The modern Supreme Court has become, as Judge John T. Noonan once called it, “a floating constitutional convention.”

A proper nominee, however, confirmed by the Senate before Inauguration Day 2021 may go a long way in strengthening the separation of powers and removing the Court from the heart of purely political battles, thus restoring sobriety and, hopefully, constitutionalism to American politics.

The Modern Court: A Difference in Kind, Not Degree

One could argue that the ascension of Chief Justice John Marshall— “The Great Chief Justice”—to the U.S. Supreme Court in 1801 was itself an act of chicanery, somewhat mirroring the events of 2020. Marshall’s nomination and confirmation came in the twilight of John Adams’s presidency. Marshall had remained a close political ally for the Federalist Adams, serving as his current Secretary of State. Although not illegal, Adams’s nomination of Marshall proved deeply political, taking place during the lame-duck period in 1801 between Adams’s defeat and upcoming Inauguration of his bitter rival: Democratic-Republican Thomas Jefferson.

Much ink has been spilt attempting to explain Marshall’s impact on the Supreme Court, but one thing seems clear: he established the authority of the Court as a truly coequal branch of government, while also ensuring the supremacy of the Constitution—the sovereign act of “We the People,” —over all the branches. A compare-and-contrast between Marshall’s most landmark case—Marbury v. Madison (1803)—and a landmark modern case—Cooper v. Aaron (1958)— provides clarity on the rise of modern Supreme Court power, which looms large in 2020.

In Marbury, the Supreme Court first employed judicial review to strike down a portion of a federal statue—Section 13 of the Judiciary Act of 1789—which, Marshall wrote for a unanimous Court, unconstitutionally expanded the Court’s original jurisdiction beyond its Article III bounds. Marshall’s opinion sang from the hymnal of Alexander Hamilton’s famous defense of judicial review in Federalist #78.

While many—especially those who favor increased judicial power in the modern era—champion Marshall’s actions, they must be understood in proper context. Marshall’s use of judicial review clearly reduced the Court’s authority by claiming it was not the proper venue for Marbury to bring his writ of mandamus request. Yet, it also simultaneously increased the Court’s authoritative independence as a co-equal branch with ability, as Marshall put it, “to say what the law is.” Marshall’s ingenious decision gave President Jefferson a victory (Marbury never got his commission) while simultaneously enhancing the authority of the Court by employing judicial review. It also prevented Jefferson from refusing to comply with the Court’s decision, which seemed likely.

Most importantly, Marshall masterfully elevated the Constitution supremely above all the branches in the American political system, including the Supreme Court. The written Constitution, he wrote, is meant to be “superior, paramount law,” and a statute clearly repugnant to the fundamental law, is “void.” Thus, while Marshall employed judicial review, it was in service of enforcing constitutional supremacy. Such statesmanship aimed at promoting (as Madison put it in the 49th Federalist) the “veneration” needed to ensure the Constitution’s perpetuation. (Interestingly, judicial review was not employed again by the Court until 1857 with Dred Scott v. Sandford, under Marshall’s successor, Chief Justice Roger Taney.)

Flash forward to the twentieth century. The Court had, beginning in 1937, transitioned from its exhaustion attempting to strike down New Deal economic regulation and instead imposed a “more searching judicial inquiry,” as Harlan Stone put it in his infamous Footnote 4 in Carolene Products (1938), towards issues involving civil and political rights. By the late 1950s, the Court, in addition to a majority of Americans, were rightly upset with southern “mass resistance” to school desegregation first announced in the landmark case of Brown v. Board of Education (1954). Following President Eisenhower’s sending in of federal troops to enforce desegregation in Little Rock, Arkansas in 1957, the Court reaffirmed its position in a landmark opinion in Cooper v. Aaron (1958).

In Cooper, the justices ordered that desegregation must begin immediately, an undoubtedly justified decision and one in line with the Declaration’s principle of human equality. However, they crafted the decision with rhetoric never before used by the Court, asserting that their decisions alone were “supreme in the exposition of the law of the Constitution.” In the very paragraph they make this claim, the justices invoke Marbury for support.

No Court had ever made such a claim of judicial supremacy, and it certainly stands in contrast to Marshall’s own assertion of constitutional supremacy. In many respects, the Cooper Court was explicating from the bench what Charles Evans Hughes, a previous Chief Justice of the Supreme Court, had claimed many years prior: “the Constitution is what the Court says it is.”

Indeed, the modern Court has developed a penchant for policy decisions and the approach of so-called “judicial activism,” or reading their own policy preferences into the fundamental law and employing a modern version of judicial review to ensure the constitutionality of those preferences. Such examples of activism prove numerous, but one thinks especially of rulings on hot-button issues such as contraception, abortion, homosexual conduct, and marriage (to name only a few)—areas arguably best addressed by the elected branches at the state or federal levels.

Many of these decisions result from the Court infusing the Due Process and Equal Protection Clauses of the 14th Amendment with substantive content to overturn various federal or state regulations or create new constitutionally protected “rights.” Combine this move with the application of virtually all the Bill of Rights against the states, the development of new constitutional doctrines (ex: “evolving standards of decency” or a “wall of separation”), and expanding federal congressional power under the Commerce Clause to regulate virtually anything tangential to the national economy, and one finds a very different Court than the one Marshall husbanded.

Thus, the Court’s lurch toward judicial activism, paired with the intensity of the confirmation battles for new justices (going back at least to the 1980s), suggest a Court with outsized, and unchecked, influence within the American constitutional system.

President Trump has a constitutional responsibility to nominate someone to the Supreme Court (Article 2, Section 2). While reasonable people will disagree about the Senate’s proper “Advice and Consent” role, Senate Majority Leader Mitch McConnell (R-KY) has already pledged to move forward with a vote on a nominee. In 2016, the Republican-controlled Senate—also led by McConnell—refused to hold a hearing for President Obama’s nominee, Judge Merrick Garland, to replace the recently deceased Justice Antonin Scalia. McConnell’s position in 2020 is that, unlike in 2016, party unity exists between the Senate majority and the sitting president. These new circumstances, he argues, justify the Senate moving forward with a vote on a nominee. Others, alternatively, claim blatant hypocrisy by Senate Republicans and that they should honor their 2016 deference to the electoral process. Yet, beyond surface-level political battles, there exist serious regime-level reasons for considering confirmation of a nominee before Inauguration Day 2021. Consider the following two:

First, John Adams’s nomination of John Marshall provides an important example worth considering. As Robert M. Johnstone, Jr. wrote, for the Federalists following the “revolution of 1800,” as Jefferson called it, the courts provided “the last bastion of moderation and sanity arresting the progress of mob rule and anarchy.” Although the Federalist Party died with the election of 1800, its ideological premises lived on under Marshall’s leadership of the Court, frustrating Democratic-Republicans while ensuring constitutional livelihood in the early decades of the republic.

Thus, should President Trump lose the election (which raises questions about the future of the current Republican Party), the nomination of a truly originalist-oriented judge would give the Supreme Court a slim originalist majority, providing an important counterbalance to what will undoubtedly be an historically progressive Biden-Harris Administration. Furthermore, if a future Democratically-controlled Congress attempts to pack the Court with “living constitutionalist” justices, an originalist justice could potentially provide a persuasive voice amongst the Court’s members. Such an approach could follow John Marshall’s own example of persuading his colleagues and achieving unanimity on many of the Court’s most consequential early decisions. Finally, an originalist nominee may also serve as a check on an emboldened re-elected Trump himself, an encouragement to his own opponents.

While there are important caveats here—such as how nominees do not always vote as expected (Earl Warren, David Souter, and John Roberts being prime examples), along with the fact that originalism can take on variety of flavors (“textualism,” “original intent,” “strict constructionism,” etc.)—originalists, as noted by scholar Jonathan O’Neill, have historically opposed claims of modern judicial power. Thus, the health of the separation of powers—the health of the Constitution—could be sustained by such an originalist majority.

Second, Marshall’s example also gets right to the issue of the Court’s expanded authority. A nominee with an originalist-mindset in terms of constitutional interpretation may help deescalate the Court from the center of massive policy decisions, thus making the elected branches more responsible, and more accountable, for major social and political issues. Marshall’s prudence in Marbury, coupled with his elevation of the Constitution, serves as a model worth following.

On this point, one also should study the political life of Abraham Lincoln. It was Lincoln who warned of abdicating too much authority to an unelected judiciary in the aftermath of the vile Dred Scott decision of 1857. In response to the purported wisdom of that decision, Lincoln made the following statement in his First Inaugural:

…if the policy of the Government upon vital questions affecting the whole people is to be irrevocably fixed by decisions of the Supreme Court…the people will have ceased to be their own rulers, having to that extent practically resigned their Government into the hands of that eminent tribunal.

While the Supreme Court should be an independent power, it should not hold absolute power, a point understood by both Lincoln and Marshall. As Robert P. George put it, reflecting on what Lincoln might say regarding the modern judiciary, “the unchecked power to do good is unavoidably also the unchecked power to do evil. If we like what the justices did in Brown v. Board, let us not forget what they did in Dred Scott.” Thus, with the checks meant to keep the Court constitutionally in line proving historically infirm (specifically impeachment), a new judge with an originalist disposition could help defang an arguably unchecked branch of government.

Put simply, it may take inserting the Court into the heat of a contentious presidential election in order to remove it from being overtly political, transferring sovereign rule from an eminent tribunal back to “We the People” in our republican system. Such action may remove the Supreme Court from the battleground of pure politics, restoring balance and making the Constitution great again.

Andrew D. Carico is Associate Professor and Chair for the Public Policy Department and the Division of Humanities at William Jessup University. He has also written for Public Discourse, Starting Points Journal, and the Claremont Review of Books.