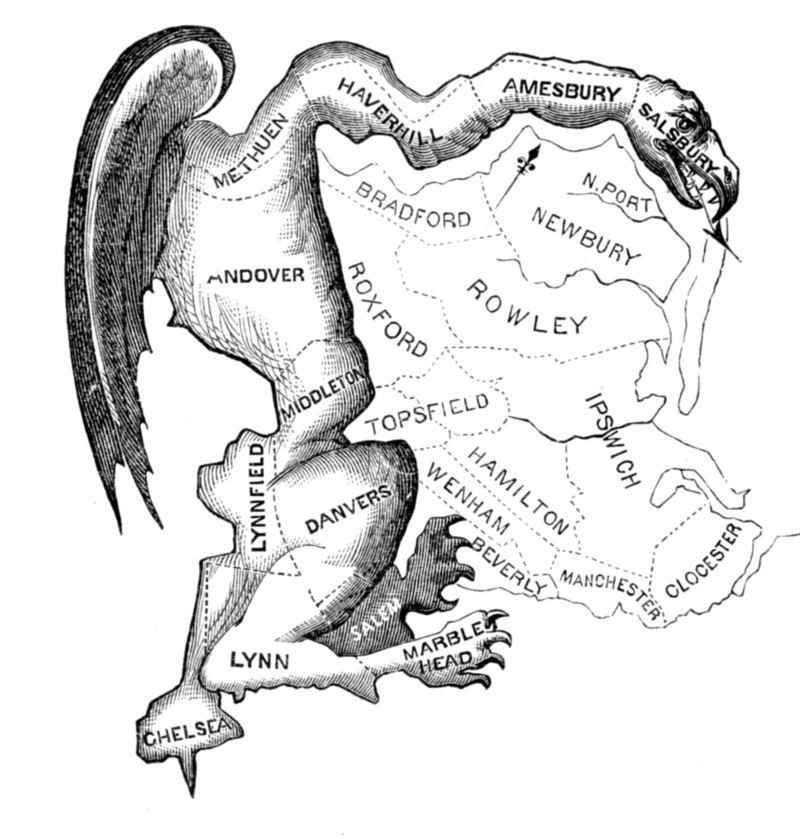 Gerrymandering is as old as the republic itself. The siren call of court intervention is attractive but will eventually make the court just another political actor. A better solution to gerrymandering is smaller legislatures.

Gill v. Whitford is important for three reasons. First, the Supreme Court generally does not hear districting cases unless there is reason to believe that the districting is racially discriminatory. Race is not the primary focus of the case, so the court is potentially inserting itself into partisan districting – a realm it has traditionally considered “non-judiciable”. Second, the gerrymandering evidence at the center of the case is based on a new mathematical measure called the “efficiency gap”. The efficiency gap purports to quantify how many “wasted votes” are cast in districts beyond those necessary to elect a preferred candidate. Wasted votes indicate “packing” and “cracking” – putting as many of the opposition party’s supporters into as few districts as possible to remove them from more competitive surrounding districts. This is the foundation of gerrymandering; it permits the gerrymandered party to win a few districts by large margins and lose many more districts by smaller margins. If the court gives its imprimatur to the efficiency gap it has recognized a mathematical formula to determine if districts are unconstitutionally gerrymandered. Third, while Gill only applies to Wisconsin state legislative districts, regardless of how the court rules it will guide all subsequent legislative districting including those for the US House of Representatives.

IF GERRYMANDERING HAS BEEN WITH US SINCE THE BEGINNING, WHY DOES IT SEEM SO DETRIMENTAL NOW?

Gerrymandering is as old as the republic itself. Patrick Henry attempted to gerrymander James Madison’s Virginia congressional district to advantage his opponent James Monroe. It didn’t work. Nor is aggressive gerrymandering a 21st century invention. The golden age of gerrymandering was in the late 19th century when statehouse parties routinely redrew legislative districts for advantage even in the middle of census cycles. Finally, it’s the party in power that gerrymanders. It doesn’t matter whether the party name begins with “D” or “R”.

If gerrymandering has been with us since the beginning, why does it seem so detrimental now? The answer dates to the founding and the Federalist and Anti-Federalist differences over representation and legislatures. The Federalists wanted a relatively small assembly populated by representatives elected from large, heterogeneous districts. District heterogeneity would keep narrow interests out of the chamber. A representative would be informed by a broad spectrum of voices, but none would determine his actions in Congress. The Anti-Federalists, in contrast, wanted a large assembly with representatives elected from a small, homogeneous districts. Each district would encompass a dominant political orientation and the representative would speak for it in the chamber.

The way these two visions of representation work in practice – for good or for ill – depends on the institutional design of the government. The Federalists and Anti-Federalists embraced different constitutional designs, and these differences centered on their respective solutions to governmental tyranny. The Federalist protection against tyranny was extensive checks and balances. For checks and balances to work properly, representatives must be elected from large, heterogeneous districts. Broad interests inform well-reasoned policy that is more likely to transcend parties and survive the gauntlet of checks and balances. The Anti-Federalists thought tyranny was best restrained by the electoral check on representatives. For this to work, one needs a more streamlined and transparent constitution populated by representatives elected from small, homogeneous, districts. Such a constitution and districting enables voters to better assess the actions of their representatives and hold them electorally accountable. The Founders’ problem was the inherent tension between these two solutions; enhancing one reduces the efficacy of the other.

Contemporary representation most closely resembles that preferred by the Anti-Federalists. Gerrymandered or not, most congressional districts are relatively homogeneous. However, we govern under the Federalist Constitution. The Constitution assumes that well-defined interests will not often be brought into the chamber. Today elections bring narrow interests into the chamber by design. We have the worst of all worlds: Anti-Federalist representation combined with the Federalist Constitution. This has very pernicious effects.

NOBODY LIKES GERRYMANDERING, BUT GILL IS THE WRONG REMEDY.

Since the Constitution isn’t going anywhere, we have to figure out how to better keep narrow interests out of the chamber by preventing gerrymandering. This is the objective of Gill v. Whitford. Nobody likes gerrymandering, but Gill is the wrong remedy. There are good reasons to be cautious of a court ruling in favor of the petitioners. The cure is worse than the disease.

First, court intervention undermines separation of powers as well as federalism. The Constitution clearly anticipates that legislatures are responsible for the administration of elections. The Constitution further expects that state legislatures will administer elections in their jurisdictions. Inviting judicial involvement uncomfortably blurs the lines between the judicial and legislative branches of government. It also challenges the proper roles of the state and national government in election processes. There are certainly good reasons for the courts to intervene in election practices that are racially discriminatory or to ensure that districts contain equal numbers of persons. These are unambiguous constitutional guarantees that states cannot deny.

However, judicial entry into ordinary “bare knuckle” politics is concerning. The court may right a current wrong, but down the road it will be more deeply embedded in legislative processes than the Constitution intended. Some believe that the court and its rulings are partisan. This is a mischaracterization; most of the time the court holds to tightly reasoned arguments that are clearly consistent with previous jurisprudence and conventional legal interpretations. However, when presented with significant political questions such as in Bush v. Gore, the partisanship of judges seems more pronounced. Being the final arbitrator of legislative districting inserts the court even further into partisan politics with greater consequences for republican government. A petitioner victory in court may well be a Pyrrhic victory; the future brings new justices, election cycles and districting. If the court enters partisan politics it will resist leaving it. This is dangerous and it will not always work to one’s favor.

In addition, the “efficiency gap” at the center of Gill gives the appearance of more mathematical precision than actually exists. No mathematical measure of gerrymandering, including the “efficiency gap” or the more commonly used “Polsby-Popper” geometric measure, provides a “bright line” test for determining whether a districting is gerrymandered. Political scientists rightly use mathematical tools to assess whether a districting is fair. Here “fair” means that the playing field isn’t tilted for or against any party. Contrary to Chief Justice Robert’s view that it’s all “gobbledygook”, these approaches for evaluating districting plans are extremely informative and have proven their value over many years. However, they must be interpreted with appropriate context and care. Non-districting factors such as incumbency advantage and natural geographic boundaries can make a proper districting appear unfair. More generally, gerrymanders are a matter of degree, and reasonable people may disagree about where that line is crossed.

WHILE IT SEEMS COUNTER INTUITIVE, REDUCING THE NUMBER OF REPRESENTATIVES WILL IMPROVE REPRESENTATIVE GOVERNMENT BY BRINGING MORE VOICES TO THE CHAMBER.

Fortunately, there is a fix for gerrymandering that does not involve judicial intervention and simultaneously promises better governance. That fix is smaller legislative chambers. Districting at its core is simply high school geometry: One has to draw lines on a two-dimensional plane so that the areas defined by those lines contain an equal number of people. The equal population requirement means that if one district’s line is moved for political advantage, other districts’ lines must also be moved. While we speak of districts as being gerrymandered, it’s really states that are gerrymandered. How much discretion one has to move those lines is a function of how many lines one has to move. The more lines, the more leeway one has to place them wherever; the fewer lines, the less discretion one has to place them wherever. Put another way, it is difficult to gerrymander a state with only a few representatives because state boundaries and the geographic population distribution largely dictate where the lines must go. On the other hand, there is greater flexibility to gerrymander if a state has several districts.

While it seems counter intuitive, reducing the number of representatives will improve representative government by bringing more voices to the chamber. Larger and more heterogeneous districts bring increased political and social diversity, but less likelihood that any one of these voices will dominate it. Representatives will be exposed to more types of people and be necessarily responsive to them, but would not be beholden to any one group. Representatives who ignore smaller communities could more easily be defeated by coalitions of political minorities. Legislative elections will be more competitive.

Second, this breadth better equips representatives to engage political questions with representatives from other districts. Representatives will see the political world from a broader perspective. Third, a smaller chamber would function more informally and its members would be less specialized in particular policy areas. Large legislatures such as the House of Representatives are hierarchical, rules-based organizations in which members tend to specialize on a few policy areas. A smaller chamber enables legislators to be generalists. In combination, all of this promotes deliberation, moderation and perhaps increased trust in our legislative institutions.

It is unlikely that the size of the House of Representatives will be reduced any time soon. Its membership has been fixed at 435 since 1911. Still, this is perhaps the easiest and least constitutionally upsetting remedy to gerrymandering. Congress can change the size of the House of Representatives at any time. The House membership has contracted only once when in 1842 it was reduced from 241 to 221. This reduction was actually greater because had the existing apportionment formula remained in effect it would have counted 305 members in 1844. In effect, the House reduced its membership by 84 representatives or by a remarkable 27 percent.

A large reduction in the chamber would have significant positive effects for representation, but only a modest effect on state influence in the chamber. Consider the nearly unimaginable decrease in the House of Representatives to 250 members. Under such an apportionment California’s delegation would reduce from 53 to about 30 members. The Los Angeles metropolitan area would shift from its current 11 Congressional districts to about 6 districts. These districts would certainly have to contain a significant mixture of ethnicities, income ranges and similar attributes. Missouri’s current House delegation would reduce from 8 to 5 members. Under such an apportionment the current St. Louis and Kansas City metropolitan area districts would have to include large suburban and rural areas. Importantly, a reduction in chamber size slightly benefits smaller states relative to large states. The smaller states gain a modest proportional increase in their chamber presence. This remedy is equally applicable to the state legislatures. In many states one can change the size of the legislative chamber by relatively easy constitutional amendment processes and through initiative and referendum.

Controversies over districting and gerrymandering will never be resolved. Regardless of which party is in control, it will seek to increase its advantage through districting. The framers understood political power always seeks more political power. The question is how to thwart the accumulation of unmerited electoral power without subverting the major constitutional principles that underlie American government.

The siren call of court intervention is attractive but will eventually make the court just another political actor. If Bush v. Gore threatened the legitimacy of the court, Gill v. Whitford threatens to remove any pretense of a body above everyday politics. Finally, it is useful to remember that parties that live by the gerrymander often die by the gerrymander. Those small but “safe” margins in many districts suddenly become very unsafe with changes in the political winds. One thing history shows is that the normal course of politics combined with the decennial census resets the political chessboard on a regular basis.

Jay Dow is author of Electing the House: The Adoption and Performance of the US Single-Member District Electoral System (University Press of Kansas, 2017).