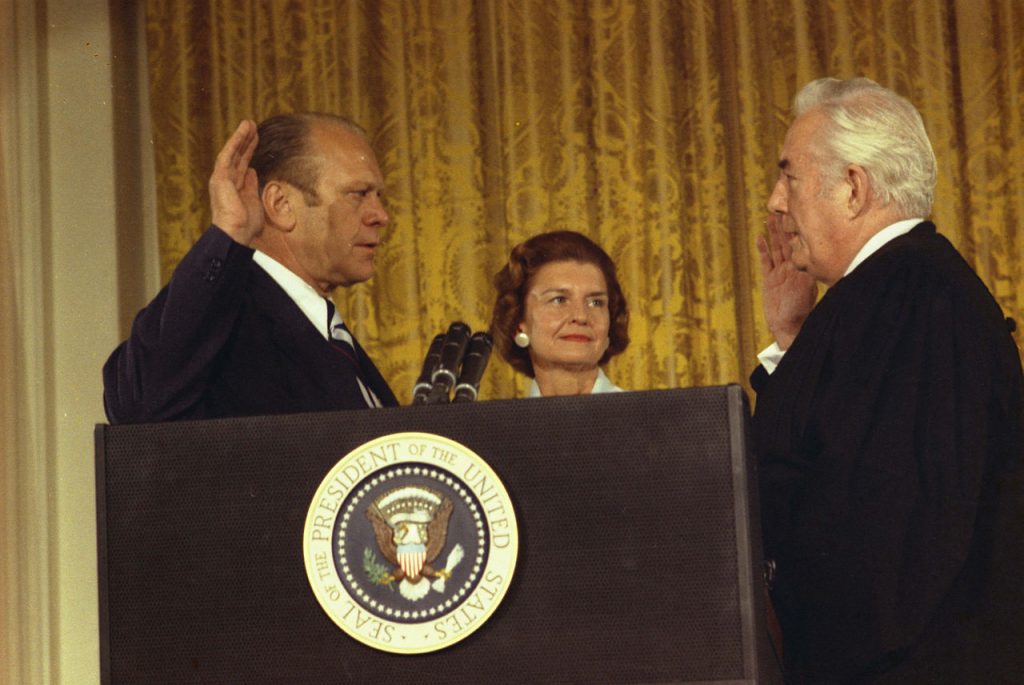 It is common for scholars to distinguish between a ‘traditional presidency’ that existed in the 18th and 19th Centuries and a ‘modern presidency’ that emerged in the mid-20th Century. Proponents of this distinction see the presidency created by the Constitution as fundamentally weak. The modern presidency, by contrast, is portrayed as stronger and able to address the problems of a complex world. This view underestimates the centrality of the Constitution and its importance in creating a baseline of power and authority that all presidents draw upon.

Since Franklin Roosevelt’s administration, it has become common for presidential scholars to distinguish between a ‘traditional presidency’ that existed in the eighteenth and nineteenth centuries and a ‘modern presidency’ that emerged in the early to mid-twentieth century and persists today. Proponents of this distinction often see the presidency created by the Constitution as weak, lacking formal powers that might allow the office to better shape policy and direct an efficient government. By contrast, the modern presidency is viewed as much stronger and more able to address the concerns of the contemporary world, with its large administrative apparatus and emphasis on rhetorical leadership.

Such a view, however, underestimates the centrality of the Constitution and its importance in creating a baseline of power and authority that all presidents draw upon. That the Constitution remains a critical source of presidential power is particularly evident when we examine the unusual presidency of Gerald Ford.

Unique among presidents, Ford became president without facing a national electorate. After being appointed to the vice presidency by Richard Nixon under the Twenty-Fifth Amendment, Ford became president when Nixon resigned after the Watergate scandal in August 1974. Thrust into an office he never sought and to which he was never elected, institutional circumstances made Ford’s political position even more difficult. On one side, he faced the opposition of a Democratic Congress that, after the 1974 midterms, gained a veto-proof majority in the House and a supermajority in the Senate. This Congress was eager to restrain presidential power after the excesses of the “imperial presidency” under Nixon and Lyndon Johnson. On the other side, the conservative faction of the Republican Party quickly became disillusioned with Ford, resulting in Ronald Reagan’s 1976 primary challenge that nearly unseated the incumbent Ford.

DUE TO OPPOSITION ON ALL SIDES, GERALD FORD WAS LARGELY UNABLE TO UTILIZE THE SUPPOSED ADVANTAGES OF THE MODERN PRESIDENCY.

Ford’s use of constitutional presidential powers is first evident in how he used the pardon power to set the agenda, deciding how the nation would move past Watergate and Vietnam. Most famously, Ford pardoned Richard Nixon. While the pardon was extremely unpopular, that Ford was able to take this action on his own, without input from the other branches, and put the nation on a course where it would not have to endure the criminal trial of a president is indicative of the strength of the presidency’s pardon power. Similarly, Ford’s conditional amnesty for Vietnam War draft-dodgers and deserters set the policy agenda, putting Congress in a position where any legislation they passed would have to fit within the political reality Ford created.

The ability of the president to set the agenda via his constitutional powers is particularly evident in Ford’s actions in foreign policy. Despite resistance from members of Congress, including fellow Republicans, Ford continued Nixon’s policy of détente with the Soviet Union. Taking advantage of the fact that the treaty power allows the president to initiate diplomatic negotiations, Ford met with Soviet General Secretary Leonid Brezhnev to construct the framework for what eventually became the second Strategic Arms Limitations Treaty (SALT II) at the Vladivostok summit in 1974 and signed the Helsinki Accords with Brezhnev in 1975.

THE ABILITY OF THE PRESIDENT TO SET THE AGENDA VIA HIS CONSTITUTIONAL POWERS IS PARTICULARLY EVIDENT IN FORD’S ACTIONS IN FOREIGN POLICY.

Similarly, Ford opened up talks with Panama for ceding control of the Panama Canal to the Panamanians—against the wishes of congressional and conservative Republican opposition. Ford’s ability to orient American foreign policy to pursue these goals despite strong domestic opposition illustrates the presidency’s constitutional capacity for shaping and directing American diplomacy, as well as for long-term policy planning. These efforts by Ford successfully laid the foundation for treaties that would be finalized during the Carter administration.

Beyond demonstrating how the president can use his constitutional authority to set the national policy agenda, Ford also illustrates how powerful the president can be in utilizing the executive’s natural capacity for energy, even when isolated from the other branches of government. We see this particularly in how Ford acted as commander-in-chief. As the Vietnam War came to a close and the communist Khmer Rouge appeared poised to conquer Cambodia, Ford recognized the need to evacuate Americans and their allies from both South Vietnam and Cambodia.

When Congress provided little support and was slow to respond to his requests, Ford acted quickly and began evacuations without congressional input or approval. He also made the unilateral decision to evacuate American allies along with Americans themselves, despite protests from both members of Congress and his own administration that evacuation efforts should focus on Americans.

After the evacuations ended, Ford was forced to act as commander-in-chief even more aggressively. Less than two weeks after the evacuation from South Vietnam, the new communist government of Cambodia seized the American freighter S.S. Mayaguez, moved the crew to the mainland, and refused to surrender either the freighter or the crew. Ford ordered military action, resulting in the successful rescue of the Mayaguez and its crew. Notably, it was only after he had given the order to begin hostilities that Ford informed Congress of his actions. Even taking the War Powers Resolution into consideration, Ford was not prevented from utilizing his constitutional powers to address the crisis in the manner that he believed appropriate.

Ford protected his basic constitutional authority and preserved the president’s role as commander-in-chief in the face of congressional efforts to become more directly involved in executive decision-making processes. The president also relied on his own normative judgment on which actions the circumstances required and was empowered to take those actions by the Constitution.

FORD PROTECTED HIS BASIC CONSTITUTIONAL AUTHORITY AND PRESERVED THE PRESIDENT’S ROLE AS COMMANDER-IN-CHIEF IN THE FACE OF CONGRESSIONAL EFFORTS TO BECOME MORE INVOLVED IN EXECUTIVE DECISION MAKING.

The efforts of Congress to undermine the integrity of the executive branch, however, were not limited to issues in foreign affairs. Domestically, in addition to his use of the pardoning power, Ford used the veto to assume leadership in legislative matters, often wielding it to force Congress on compromise on various policy measures. The veto became a key weapon in Ford’s fight to defend the power of the executive branch.

While Ford’s vetoes were not always successful in stopping Congress’ efforts—twelve of his vetoes were overridden, the second-highest number of veto overrides after Andrew Johnson’s fifteen—Ford was often able to use his position as “chief legislator” strategically to create “floating coalitions” of congressman and thereby disrupt override efforts. That Ford was successful in preventing some overrides highlights the difficulty Congress faces in overriding presidential vetoes and illustrates how powerful the veto is as a tool of presidential policy-making.

Ford’s administrative control of the executive branch also served to defend the institution against legislative encroachment. When Congress initiated investigations into the CIA with the Church and Pike committees, Ford was able to head off the committees through the formation of executive commissions designed for the same purpose. These commissions, one chaired by Vice President Nelson Rockefeller called the Rockefeller Commission and the other called the Intelligence Coordinating Group (ICG), allowed the administration to maintain some control over these investigations in the executive branch without appearing to ignore the problem. While the commissions did not fully deflect the congressional investigations, they did provide Ford with alternative recommendations for reforming the intelligence community that were not as compromising as those proposed by the congressional committees.

Apart from simply maneuvering around the committees, Ford also addressed the investigations more directly. First, he invoked executive privilege to prevent the committees from gaining access to confidential information and rejected a subpoena the Pike Committee served to Secretary of State Henry Kissinger to testify. Second, Ford used an executive order to reorganize the intelligence agencies and mandate policy changes to preempt the congressional investigations, effectively “muting subsequent congressional debate on the matter.” Thus, even while the congressional investigations put Ford on the defensive, he was able to use his superior position and administrative authority derived from the Constitution’s structure and powers to defend executive control of the intelligence agencies and repel congressional intrusions.

EVEN WHILE CONGRESSIONAL INVESTIGATIONS PUT FORD ON THE DEFENSIVE, HE WAS ABLE TO USE HIS SUPERIOR POSITION AND ADMINISTRATIVE AUTHORITY TO DEFEND EXECUTIVE CONTROL OVER AGENCIES.

Despite being unelected and facing substantial opposition from both Congress and his own party, Ford was able to consistently rely on the power provided to him by the Constitution for pursuing and achieving his policy goals. While not successful in every instance, Ford’s presidency demonstrates that even when stripped of the supposed advantages of the modern presidency, the president can rely on the basic powers provided to him by the Constitution to not only hold his own against the other branches, but also succeed in obtaining some of his major initiatives. While Ford is often hailed for his moral leadership, he must also be recognized as an excellent example of the capacities of the constitutional presidency and how the office’s constitutional authority continues to persist into the modern era.

Jordan T. Cash is a PhD candidate in political science at Baylor. His primary research interests include constitutional law, American politics, and the history of political philosophy. He has written on judicial review for Law and History Review and has an article on the presidency of John Tyler forthcoming in American Political Thought.