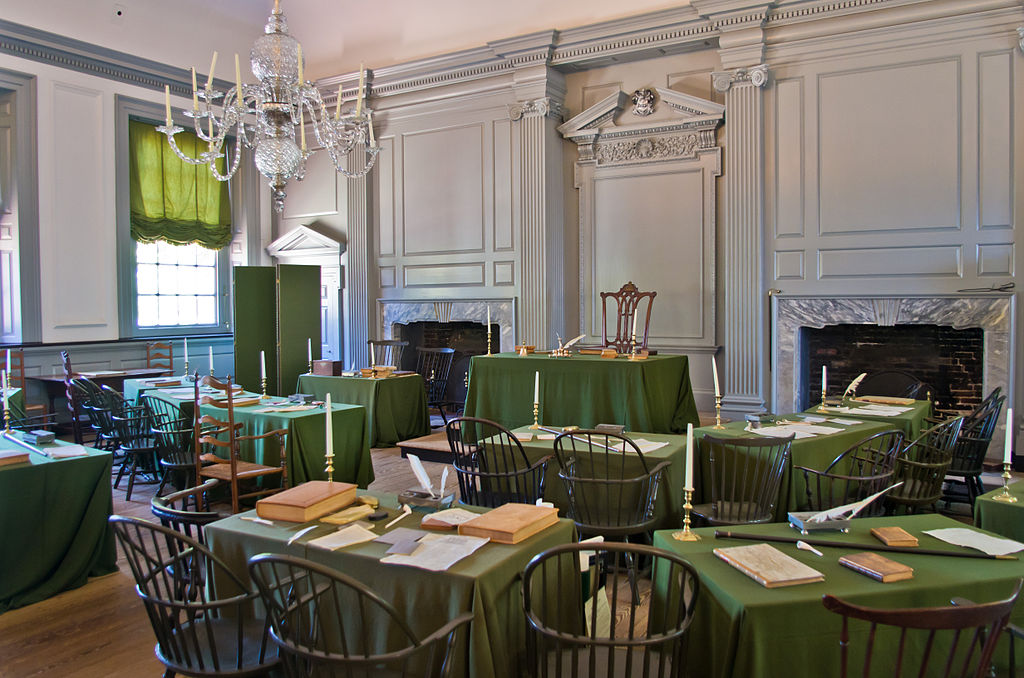 Why study the Constitution through the medium of role-play? Students playing roles will better appreciate the difficulties of framing a constitution and better understand what was at stake and what was possible for the delegates who gathered in Philadelphia—better than if they simply heard or read about the event.

A Convention delegate—who shall go unnamed—while researching the backgrounds of his colleagues in Philadelphia, has uncovered information of a compromising nature; and being something of a scoundrel himself, he resolves to use that information in ways that will advance his own interests. One by one does he approach his targets, intimating that, for considerations, he might be willing to keep quiet about their secrets. When he comes upon Alexander Hamilton and repeats the rumor that Hamilton once proposed hereditary membership for the Society of the Cincinnati, thus threatening to supplant the Republic with a military junto, he is staggered by Hamilton’s response—not a deal but a duel, to be conducted immediately. Nerf pistols at 20 paces!

Reacting to the Past is an innovative classroom pedagogy that teaches history and related subjects through a series of role-immersion games. Students in Reacting read from specially designed game books that place them in moments of major historical significance. The class becomes a public body; students, in role, become particular persons from the period and/or members of factional alliances. Their purpose is to advance a policy agenda and achieve their victory objectives through formal speeches, informal debate, negotiations, vote-taking, and conspiracy. After a few preparatory lectures, the game begins, and the students are in charge. The instructor serves as an adviser, or gamemaster. Outcomes sometimes vary from the actual history; a debriefing, postmortem session sets the record straight.

Currently there are 35 or so games in regular use; dozens more are in various stages of development. An editorial board oversees their progress.

A game consists of three components: (1) a game book, available from Norton, the series publisher, or from the Reacting Consortium Press (in conjunction with the University of North Carolina Press), or from the online Reacting Consortium Library; (2) an instructor’s guide; and (3) the role descriptions. Sometimes a supplementary book is included as a fourth. Norton provides the supporting materials for the games it publishes; otherwise these materials exist on the Consortium Library accessible to registered faculty free of charge. (Go to https//reacting.barnard.edu; then click on Curriculum.)

STUDENTS CAN HARDLY MISS THE FACT THAT HARD-BARGAINING UNDERLAY MANY OF THE CONSTITUTION’S PROVISIONS.

Why study the Constitution, or a host of other subjects, through the medium of role-play? The advantages are numerous:

· Students are rarely bored in Reacting, because they are active participants, leaders often, not passive note-takers. (Will the text of the Constitution, Madison’s Notes, and lectures thereon really capture their interest and hold their attention?)
· Students rarely miss class, and rarely is the reason other than sickness, and sometimes not even then (e.g., the student who, rushed to the hospital with a collapsed lung, was in class that afternoon because she had a speech to give).
· Students work harder than in conventional classes, because they want to win and because they have allies who depend on their efforts.
· Students speak—and speak and speak—formally at the podium and informally in debate. Speech fills the room. The silent classroom, the bane of every instructor, is completely absent here.
· Students write better papers, because their objectives are clear and their audience is known.
· Students retain more of what they learn, because reading is purposeful and thought is suffused with emotion.
· Students have the chance to inhabit a character from a distant time and place and to view the world as that person would view it, to advocate for what that person values and believes.
· Students learn that adult life is marked by interests, which interests require advancing, defending, and compromising. A Reacting game is adversarial, with every proposal contested or met by a counterproposal; but also collaborative, with faction-mates operating as a team and with backstage deal-making often determining outcomes. Reacting games, therefore, provide indispensable training for students considering law school or aspiring to executive positions.

More specific to the “Constitutional Convention,” students playing the game cannot help but be impressed by the contingency of the event enacted, by the overriding importance of who showed up and stayed around (a game mechanic replicates this contingency—the names of a few delegates drawn from a bag, with their votes for that session doubled or eliminated depending on the roll of a die); also by the distinctiveness of each delegate, affected by background, beliefs, obligations, and ambitions (for example, the young Charles Pinckney, eager for recognition, in the game importunes the Convention secretary to distribute his, Pinckney’s, rival plan of government to distract from, and possibly replace, Madison’s Virginia Plan). Likewise, students can hardly miss the fact that hard-bargaining underlay many of the Constitution’s provisions.

But most of all, students discover that big ideas informed the debates and shaped the Constitution. Leading the list is Madison’s idea of the extended republic. During the New Jersey Plan debate (much expanded in the game to provide entry for Federalist and Antifederalist thought of the Ratification period), Madison explicates his new theory, only to be countered by the opposition, called confederalists, holding firm to the Montesquieuian contention that small-state republics are the sine qua non of liberty. Or the idea of representation, particularly the true nature of a republican representative, which one party, the nationalists, likens to that of a trustee exercising independent judgment for the commonweal, while the other party, the confederalists, likens to that of an agent of the electorate doing exactly as the voters would do if assembled and properly versed. Or the imperative of proportional representation applied to both chambers of the legislature, this prerequisite of justice placed in competition with the imperative of defending the equality and identity of each of the 13 states—hence the nature of the association being formed, whether a consolidated union of a single people under a central government, or a confederation of semi-sovereign states, or a hybrid of the two. Or a “high toned” senate, the purpose and structure of which several nationalists expound using Aristotelian and Machiavellian mixed-regime theory, and which several confederalists decry as an aristocracy. Or the presidency, especially such elements as mode of election, term of office, and reeligibility, with a virtual dare to the student-delegates to come up with a solution better than the electoral college.

A ROLE-PLAYING GAME ON THE CONSTITUTIONAL CONVENTION PUTS STUDENTS IN POSITIONS TO GRAPPLE WITH THE ISSUE FOR THEMSELVES, FIRSTHAND.

And then there is slavery. How to justify so abhorrent an institution, and in a republic proclaiming universal rights, no less? On the other hand, how to deny a region of the country an invaluable, perhaps irreplaceable, labor source, long accepted, and whether to risk breaking up the union because of this?

By way of supplying an answer of its own, Starting Points, in the fall of 2017, hosted an exchange of views between Mary Sarah Bilder and Lynn Uzzell over the question of the culpability of the Convention, the Constitution, and James Madison in perpetuating slavery in America. Bilder is the author of Madison’s Hand: Revising the Constitutional Convention, and Uzzell is the author of “A New Investigation into Madison’s Notes of the Convention: Solving the Mystery of the June 6 Speech.” Bilder disputes the authenticity of Madison’s anti-slavery comments at the Convention and aligns Madison with those southern delegates committed to protecting slavery in most of its facets. Uzzell calls Bilder’s analysis a cascade of conjectures serving to resuscitate the Garrisonian thesis that the Constitution was a compact with slavery.

A role-playing game on the Constitutional Convention cannot resolve this controversy, nor does this game take sides. It rather puts students in positions to grapple with the issue for themselves, firsthand. Madison is told that his nationalism is tempered by his southern regionalism. In the matter of electing the president, for example, popular election would supply the executive with a base of support independent of the legislature and so satisfy an essential requirement of separation of powers, a doctrine heartily endorsed by the nationalists; but popular election would do grievous harm to the South, half of whose population is enslaved and thus non-voting. How to respond? Meanwhile, Luther Martin of Maryland is told that his states’-rights confederalism is tempered by his abolitionism, a moral stance that would have him welcome the intervention of the national government in the internal affairs of the states. He too faces a dilemma. The supposition here is that students playing roles will better appreciate the difficulties of framing a constitution and better understand what was at stake and what was possible for the delegates who gathered in Philadelphia—better than if they simply heard or read about the event.

I conclude with some specifics regarding The Constitutional Convention of 1787. It is different from other games in the Reacting to the Past series in that it comes in three fully developed versions: Full-Size, Mid-Size, and Standard. The first two versions follow the course of the Convention and set students the task of constructing fairly complete constitutions working from the Virginia Plan (Mid-Size is like Full-Size only shortened by the removal of some constitutional issues). For both versions the roles are individualized; factional affiliations, while present, are of secondary importance. College students are the primary audience, but the Full-Size version is challenging enough for graduate students and law students. The Standard version, aiming for simplicity, brevity, and accessibility, attempts no faithful rendition of the Convention; it instead focuses debate on four large Convention issues, subdivided into nine lesser-issues. The resulting constitution is therefore much abridged. Both individual and factional roles are employed, although factional identity is more important here. Beside college students, AP high school students are the intended audience. All versions use the same game book, but each has its own instructor’s guide and its own role descriptions. All versions as well are adaptable to classes of varying sizes—from 12 students at the low end to 40 students at the high end (indeed, the Standard version has been played in classes of over 200 students). As a sampler, a related short game exists titled Raising the Eleventh Pillar: The New York State Ratifying Convention of 1788. It takes only one week to play; the three versions of the “Constitutional Convention” game take from three to eight weeks. (FYI: The Standard version will be presented at the Reacting Annual Institute, June 14-17, at Barnard College in New York City. If interested in attending, you can begin registration by going to https://reacting.barnard.edu/ai-2018..)

Our unnamed friend, the serial blackmailer, has a secret of his own to hide. He is a speculator in western lands, but his many risky investments will all collapse if the Mississippi River, controlled by Spain at its mouth, is closed to American traffic. Rather than trust in government-to-government negotiations to keep the river open, he has involved himself in a conspiracy with British agents to start a war against Spain, driving it out of the West. A letter written by him to a fellow conspirator on the frontier was stolen before it could be destroyed, and he is now worried, and rightly so, that the letter has come to Philadelphia (i.e., is somewhere in the classroom). If another delegate should find the letter first, it won’t matter whether he survives his duel with Hamilton. The drama continues!

John Patrick Coby is Professor of Government at Smith College.