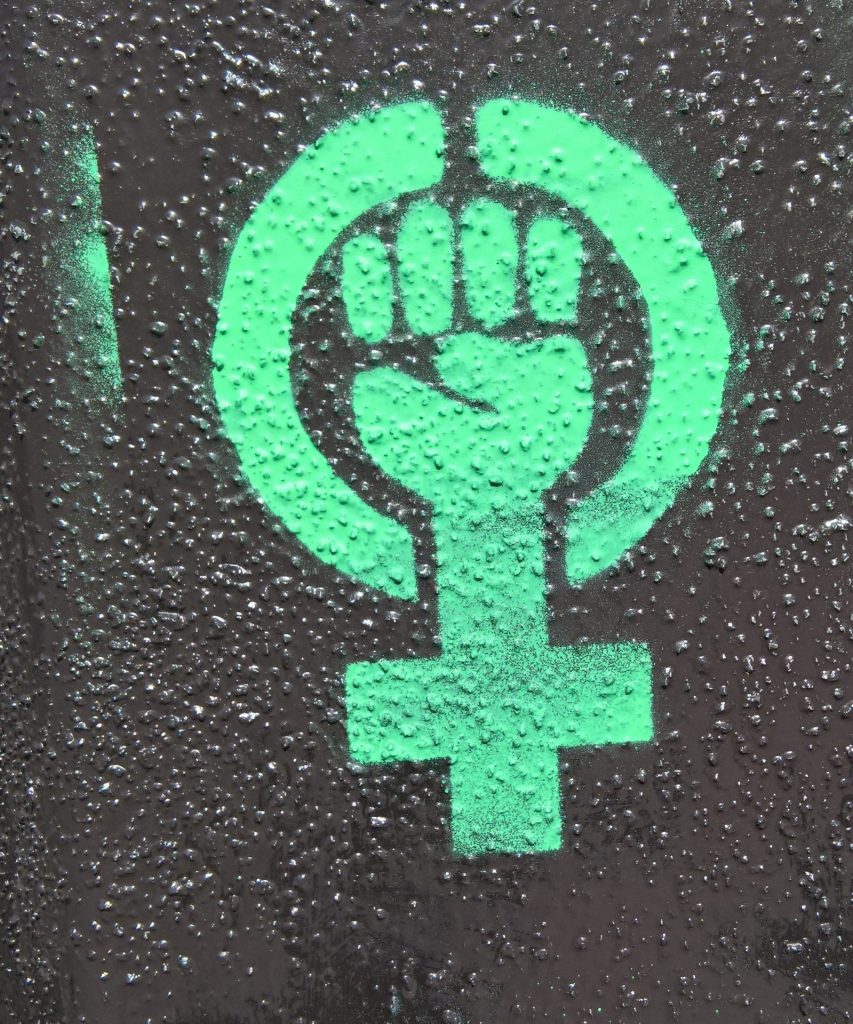 Following the logic of the feminist revolution toward its embrace of transgender rights provides insights into its unpredictable character.

Second-wave feminists, taking their inspiration from Simone de Beauvoir, seek human liberation through the divorce of sex and gender. Women had long been “the second sex,” Beauvoir worried. Women will be free only when they transcend the cultural scripts around motherhood and wifeliness that attached their identities to their bodies. She imagined a world beyond gender and of human liberation.

The career of such a feminism aligned, as I argued in a previous essay, with the goals and methods of American Progressivism. The progressive project, articulated in the political thought of John Dewey, aimed to secure the conditions for individual freedom or growth through properly reconstructing the political and social environment with scientific administration. Economic reform was the object of the first generation of Progressive reformers; cultural reform, partly along the lines imagined by second-wave feminists, was the second generation’s aim.

A NEW LIBERATING SCIENCE WAS ARISING, AND IT SHOWED THAT OLD STEREOTYPES DISABLED WOMEN.

Betty Friedan is a crucial figure in translating feminism into a part of the progressive project. Friedan embraces Deweyian growth as the goal of feminist-progressive reform. Her role in calling forth a new science to promote growth is much less appreciated.

Friedan uses the term “the feminine mystique” to describe the complex of laws, opinions, and pressures that turn women into sexually passive housewives. An old patriarchal science that Friedan identifies with Sigmund Freud and others had, in fact, long reinforced the “feminine mystique,” counseling women to find fulfillment in their distinctive wifely and motherly tasks. In Friedan’s day—she wrote in the early 1960s—that patriarchal science would have predicted that women would be satisfied, fulfilling their destinies as wives and mothers during the baby boom.

Instead of satisfaction, Friedan found that women of the 1950s and early 1960s suffered from boredom, felt trapped, and sensed they had nothing important to do. Friedan traced this discontent to a disjunction between society’s expectations and women’s dreams. Adhering to the feminine mystique meant that women’s identity conformed to the passive, maternal, wifely gender roles predominant in a culture, yet this discontent shows that women were not satisfied with that destiny. This suffering she calls the “problem that has no name.” A woman who allows society to define her life for her has a “forfeited self” with “no goal, no purpose, no ambition patterning her days into the future, making her stretch and grow beyond the small score of years in which her body can fill its biological function.”

The problem with no name is a problem that science had not yet identified: neither doctors, counselors, psychiatrists nor the popular press name the problem. A new liberating science was arising, and it showed that old stereotypes disabled women. It promised to establish the importance of human liberation to a healthy identity. “The core of the problem for women today is,” Friedan contends, “a problem of identity—a stunting or evasion of growth that is perpetuated by the feminine mystique.” Friedan writes:

“I think the experts in a great many fields have been holding pieces of that truth under their microscopes for a long time without realizing it. I found pieces of it in certain new research and theoretical developments in psychology, social and biological science whose implications for women seem never to have been examined. I became aware of a growing body of evidence, much of which has not been reported publicly because it does not fit the current modes of thought about women—evidence which throws into question the standards of feminine normality, feminine adjustment, feminine fulfillment, and feminine maturity.”

Patriarchal science had been aligning cultural norms with the feminine mystique. These new researches would show how cultural norms had caused an “identity crisis” in each woman and show a way forward toward growth and liberation.

THE MISMATCH BETWEEN SOCIETY’S ARTIFICIAL DEMANDS AND THE REQUIREMENTS OF INDIVIDUAL FULFILLMENT ARE CENTRAL TO THE PROGRESSIVE-CUM-FEMINIST PROJECT.

While Friedan seemed to think that the feminine mystique was the product of post World War II America, her feminist followers were more radical. They saw that women had suffered from cultural oppression under the influence of patriarchy for millennia. Using the tools of the science that Friedan saw bubbling around, these more radical feminists would aspire to identify all of the sources of patriarchy in every sphere of life.

Kate Millett (Sexual Politics [1970]) expands Friedan’s insights. As Millet writes, “Implicit in all of the gender identity development which takes place through childhood is the sum total of the parents’, peers’ and the culture’s notions of what is appropriate to each gender in the way of temperament, character, interests, status, worth, gesture, and expression.” Much, if not indeed all, of human identity is traceable to society’s imposed “gender identity development.”

Millett points to the need to reconstruct academic disciplines, especially social sciences and humanities, so they focus on revealing structures of gender oppression that have subjugated women. Universities are doubly central to social transformation: they identify the sources of social indoctrination and oppression from which women (and others) must be liberated; and they would recommend how to construct a world without gender. Millett’s “Theory of Sexual Politics” includes a research agenda of the new science of liberation, where biology, sociology, economics, anthropology, psychology, history, and other disciplines are directed toward demonstrating how gender has been socially constructed in the past. The clear implication is the constructions of the past can be de-constructed and a new society constructed also with the assistance of these and other disciplines.

This liberating science identifies and condemns sources of oppression, but it could do little more than glimpse the future world beyond gender. That would also be a work of imagination that could be promoted through all public institutions: universities (and especially the new humanities) and popular culture generally would play no small part in undertaking such exercises of imagination producing a revolution in ideas of sex and gender.

This deconstruction and reconstruction—the rolling revolution—involves three, well-nigh unfinishable reforms. First and principally, it abolishes “the ideology of male supremacy and the traditional socialization by which it is upheld in matters of status, role, and temperament” leading to the “integration of the separate sexual subcultures, an assimilation of both sides of previously segregated human experience.” Any experience that fosters difference between men and women would, ultimately, fall under this rubric. If women are disadvantaged by a different “status, role, or temperament,” the practice sustaining that difference must be erased. Under this rubric, it seems, such phenomena as romantic love, female modesty or shame, male initiative, male aggression, female passivity, and other differences must be erased; until they are, the work remains incomplete.

Second, a drastic change in the “patriarchal propriety family” is necessary for women to secure “complete economic independence.” Women must obviously secure fulfilling employment outside of the home, but they must also think of themselves as independent beings from their husbands. An “important corollary” to this goal is “the end of the present chattel status and denial of right to minors,” since women often feel the need to rear dependent children to responsible adulthood. Dependence compromises people’s choices and growth. This plank of the feminist project would remain incomplete so long as women or children remained dependent within the family.

Third, feminism demands a sexual revolution. By sexual revolution Millett understands “an end to traditional sexual inhibitions and taboos, particularly those that most threaten patriarchal monogamous marriage: homosexuality, ‘illegitimacy,’ adolescent, and pre- and extra-marital sexuality.” Restrictions on sexual activity have reinforced the practice of romantic love, monogamy, parenthood, and other cultural attributes that define traditional family life. Emancipating sexuality from such restrictions would open up marriage at the same time, divorcing marriage from sexuality and allowing individuals to express primal human drives without inhibition. Such openness probably includes the inculcation of the sexuality of children and an end to the incest taboo, among other things. So long as individuals are sexually repressed the feminist project is incomplete.

The new science would identify sources of socialization and promise fulfillment to those who escape the strictures of socialization. The mismatch between society’s artificial demands and the requirements of individual fulfillment, identified earlier as the problem with no name, are central to the progressive-cum-feminist project.

TRUTH AND REALITY AS NEW EXPRESSIONS OF OPPRESSION APPLY ESPECIALLY TO GENDER.

The key figure in turning feminism toward transgender rights is Judith Butler, a self-described follower of French post-structuralist Michel Foucault. Butler’s Foucault seeks to expose the way political power manifests itself in our ideas of truth, reality and language. “Truth” and “reality” (with the scare quotes) reinforce the dominant group’s vision of political power and make its way of life implicitly normal. Society exerts this power subtly, by constructing “truth” and “reality,” and thereby a theory of what categories one must fit into to be human. To use Butler’s more technical language, Foucault’s History of Sexuality exposes the “mechanism of coercion” behind the modern preference for heterosexual sex in the hopes of liberating a more polymorphous expression of sexual desire and the discovery of new genders beyond the binary.

Truth and reality as new expressions of oppression apply especially to gender. Butler welcomes all phenomena that question what she takes to be society’s arbitrary categories surrounding gender. Her Gender Trouble (1990) emphasizes the transgressive nature of drag and cross-dressing, while her Undoing Gender (2004) adds transgender experience as the latest new gender performance that upsets the norm. “When something [seemingly] unreal,” as Butler writes in Undoing Gender, “lays claim to reality. . .something other than a simple assimilation into prevailing norms can and does take place. The norms themselves become rattled, display their instability, and become open to resignification.”

Butler aims not only at shaking confidence in oppressive norms, but in a new society that affirms the gender performances of each. “We are not carving out a place for autonomy,” Butler writes, “if by autonomy we mean a state of individuation, taken as self-persisting prior to and apart from any relations of dependency on the world of others.” Persons “cannot persist without norms of recognition” that support their persistence and build their mental health. One’s identity is never fully real or fully one’s own until it is endorsed in and through the public authorities and recognized as such by one’s fellow citizens. The “very sense of personhood is linked to the desire for recognition, and that desire places us outside ourselves, in a realm of social norms that we do not fully choose.” Affirmation and support means that all public institutions, and probably all public opinion, recognize the merit in gender performances and support those performances as they arise.

It is difficult to imagine how the work of undoing gender could be completed: it seems to demand continual social transformations not only in the name of liberation from past impositions but also as a means of securing recognition for tomorrow’s. Butler doubts whether we need norms to live, but all individuals need public recognition and affirmation for their identity to continue.

The transgender rights movement certainly seeks to undermine “the ideology of male supremacy and the traditional socialization,” which had assumed that there was a binary division within the human family. It thus disrupts the norms, as second wave feminists had hoped. This movement of rights may often harm the interests of women, but it furthers the interests of the feminist revolution and that is its goal.

Scott Yenor is Professor of Political Science at Boise State University and was 2015-2016 Visiting Fellow in American Political Thought in the B. Kenneth Simon Center for Principles and Politics at The Heritage Foundation. He is the author of Family Politics: The Idea of Marriage in Modern Political Thought (Baylor 2011) and Hume’s Humanity: The Philosophy of Common Life and Its Limits (Palgrave 2016).