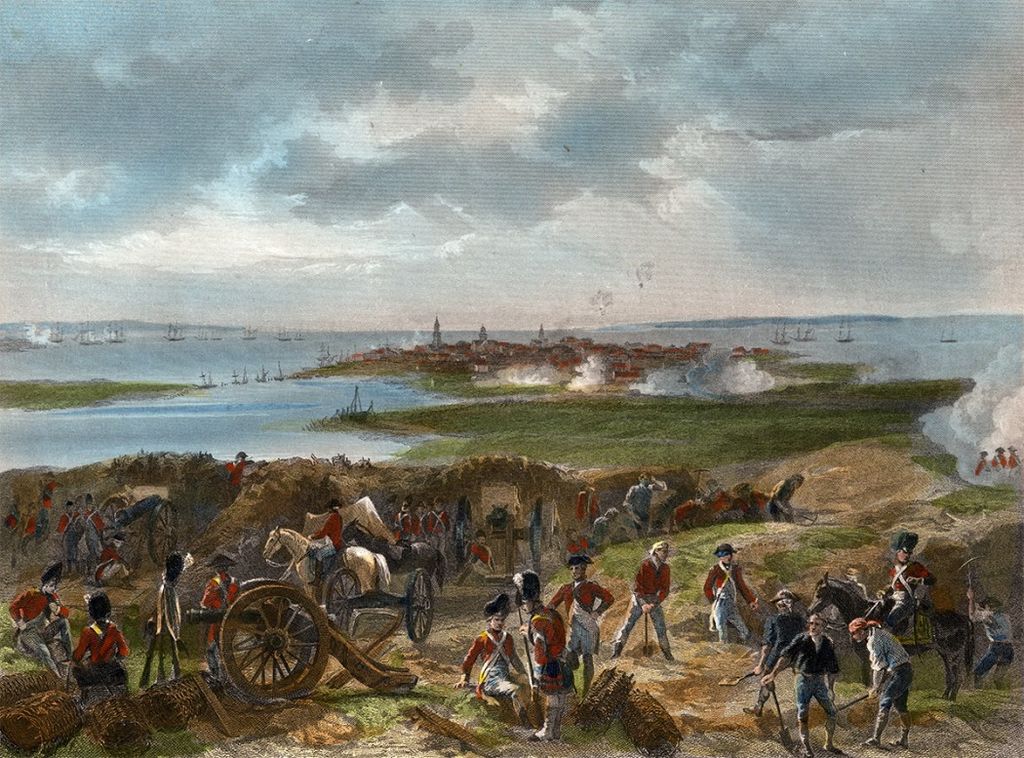 The problem of legitimate resistance to tyranny – how a people should resist a tyrant – is perennial. Scholars have recently called into question that which was once considered established beyond doubt – that the Revolution and American independence were both necessary and good. Americans today may indeed face challenges similar to those of colonial Americans. Yet, if we are to oppose tyrants, like our forebears, Americans need to reflect upon their example in identifying tyranny, responding to it, and legitimately opposing it. Examples of such prudence and moderation in the course of rational resistance, fortunately, are available to us, embedded in our shared national history.

Examining the American Revolution’s rationale for resistance involves at least two key questions. First, as the American people in 1776 were almost entirely Christian, they needed to answer a question that pressed most directly on their consciences: was there biblical or theological justification for resisting God’s appointed authorities? And second, from the broader perspective of international law: were the conditions of a just war (jus ad bellum) met before Americans took up arms and declared independence? If it was a just war – and I argue that it was – then the pattern established by the American revolutionaries serves as a proper model for those who would oppose tyranny in every age.

Religious Foundations of the Revolution

Most early Americans were religious – a biblically-literate Protestant people. According to some estimates, about 98% of Americans were Protestants. In that community, the teachings of Scripture were taken seriously. The biblical literalism of the Loyalist argument seemed persuasive: how could any pious Christian seek independence from Great Britain by violent measures when the Bible taught that unconditional submission to the civil magistrate was a religious duty? In Romans 13, the Apostle Paul wrote to the Christians of Rome during the time of Emperor Nero and exhorted them to obedience:

Let every soul be subject under the higher powers. For there is no power but of God: the powers that be are ordained of God. Whosoever therefore resisteth the power, resisteth the ordinance of God: and they that resist shall receive to themselves damnation.

For Loyalist clergy, the lesson was clear: to resist was to incur guilt and the punishment of damnation.

Yet – obviously – Americans on the Patriot side disagreed. Patriot pastors drew on a centuries-old tradition of theological interpretation developed primarily by Reformed Christian political thinkers to defend their armed resistance to British power. Most influential in developing Reformed resistance theology were the anonymous Vindiciae, Contra Tyrannos (written after the massacre of French Huguenots in 1572) and  Lex, Rex, a 1644 book by Samuel Rutherford, a Scottish Presbyterian theologian who later served as a member of the Westminster Assembly. These belonged to a broader tradition of European theological resistance literature, and scholars have observed that they were influential in the development of the more secular resistance theories of Algernon Sydney’s Discourses Concerning Government and of John Locke’s Second Treatise, whose influence on the American Declaration of Independence was enormous and obvious.

This Reformed theological tradition agreed that God had ordained government for man’s good, and that only in rare cases was it lawful to resist God’s magistrate. Cases of lawful resistance, however, could and did exist. What this tradition offered, in fact, was an explanation of when resistance to tyrants was just, and even a duty to God.

Religious historian Daniel Dreisbach explains Samuel Rutherford’s views with useful clarity. Rutherford taught that the subjects of a tyrant must follow a sequence of resistance. The preliminary step was to define and identify tyranny – a tyrant was a ruler who habitually acted contrary to the common good of his subjects and subverted the law. The first step on the path of resistance was “defense by words,” to protest or to petition the tyrant to cease abusing the people. Secondly, the people ought to flee persecution and tyranny if, within reason, flight were possible. Third, resistance may be exercised initially by passive disobedience (nonviolent civil disobedience) and then active disobedience (forcible self-defense).

Moreover, the authorization to resist civil magistrates could not come from the people themselves. In Rutherford’s presentation, forcible resistance required the leadership of lower magistrates, who with a king were equally accountable to God for their positions and to the people for the just execution of the laws. This was the doctrine of the inferior magistrate (developed in Lex Rex, Q. 20 and Q. 31), and adherents of this resistance tradition broadly agreed that armed resistance to higher powers required direction by a legitimate, though inferior, governing official.

Rutherford’s views, and those of the Vindiciae, were adopted and in some ways secularized by later political theorists, including John Milton, Algernon Sidney, and John Locke. In the American colonies they fused into a single tradition where they were explained long before the American quarrel with George III by, among others, Jonathan Mayhew. Mayhew’s “Discourse Concerning Unlimited Submission and Non-Resistance to the Higher Powers” was published in Boston in 1750 to commemorate the centennial anniversary of the execution of Charles I, and this sermon was read widely throughout the colonies. By the 1770s, many clergymen made essentially identical arguments. Simeon Howard’s 1773 sermon and Samuel West’s 1776 election sermon, for example, both explained that violent resistance against unjust rulers could be necessary and even just. West concluded that “the same principles which oblige us to submit to government do equally oblige us to resist tyranny.” A tract published in 1783 based on a 1779 sermon, “Defensive Arms Vindicated,” reiterated the same line of reasoning: magistrates who turn tyrannical “are not God’s ordinances, and there is no hazard of damnation for refusing to obey their unjust commands.” The idea of a religious duty to resist tyrants was widespread throughout the American colonies. But did the conditions of colonial life merit violent resistance to British authority?

Traditional Just War Theory laid out the criteria for initiating a just war. The most important factors required that a war have a just cause, be a last resort, and be declared by a proper authority. Eighteenth-century American Whigs certainly believed that these conditions were met when the fighting began. In 1775, the Second Continental Congress provided precisely this type of just-war reasoning in their official statement, “The Declaration of the United Colonies.” John Dickinson, its primary author, argued that Americans were fighting for self-defense (a just cause), not for independence, and that they desired peace with Great Britain. They had petitioned Parliament for redress on numerous occasions, but Parliament had dismissed their concerns. Passive resistance had been attempted without success, and now defensive arms were raised, therefore, only as a last resort. Congress itself was, of course, the proper authority.

To support their case, the Congress sent an Olive Branch Petition to George III. When the petition arrived in London later that year, however, George III ignored it, just as he had all previous petitions. “Defense by words” had failed, and flight – deserting the American colonies – was not an option. The theological and philosophical traditions which justified armed resistance against a tyrant agreed: forcible resistance was now fully justified and the road to independence clear.

The Declaration of Independence echoed all these arguments. This should be no surprise, for Jefferson himself referred to the document as the product of the “harmonizing sentiments of the day.” As Daniel Dreisbach again explains, the Declaration of Independence can be read both in the light of the Protestant resistance theories and the theories of John Locke. This is found in the Declaration’s conclusions that George III was a tyrant (“A Prince, whose character is thus marked by every act which may define a Tyrant”) who by his actions had “abdicated Government” in the colonies, as well as American efforts to petition for redress, which had been answered “only by repeated injury.” The final American step, independence, was taken by the legitimate representatives of the American people – inferior magistrates, in Rutherford’s and the Vindiciae’s language – by “the Representatives of the [U]nited States, in General Congress, Assembled.” This was the pattern of behavior that leading up to a legitimate revolt against an established government, and this was the model of behavior followed by the American revolutionaries.

The American cause in 1776 stood within a long tradition of resistance to illegal or unconstitutional usurpations of power. Americans were slow in moving toward independence and sought honorable reconciliation with their monarch by means of petitions, diplomacy, and boycotts. Only after these repeatedly failed, and when the King and Parliament had demonstrated by “a long train of abuses and usurpations” that they were uninterested in guaranteeing American rights, did the Americans choose to separate from Britain. This came at the price of warfare, but they were confident that their cause was demonstrably just (jus ad bellum) and not a violation of their biblical duty to submit to the magistrate.

The pattern established in the 18th century by the American Revolution remains relevant to the 21st century. Free citizens who seek to hold their governments accountable still face the question of when to obey just government and if – or when – disobedience to tyrannical government has become their duty. One has only to glance at the condition of American society in 2020 to see that this remains an active concern. The American citizens protesting lockdown restrictions as imposed by executive orders without clear legal basis and the citizens who are challenging abuses in law enforcement as evidence of a systematic pattern of oppression are finding themselves alarmed and frustrated by the behavior of their elected (and un-elected) officials. How should free citizens respond to abuses? In this era of heightened conflict between the people and their government, the pattern established by the founding generation – their actions, their sermons, and their official Declarations – is exactly the model American citizens need.

And what lessons can Americans draw from the success of the American Revolutionaries? First, and of greatest importance, is the need to respect established governments by seeking to rectify grievances through initial peaceful, legal means. Petitions and protests are a proper first step. Samuel Rutherford and others called for the same – and the American revolutionaries responded in kind. Even if petitions fail, the record of asking for redress becomes a means of demonstrating the tyrannical quality of a government.

A second lesson, one of particular importance to Americans of faith, is that Romans 13 and similar biblical texts do not demand unconditional obedience and total submission to an unjust government. As Patriot American clergy and their Christian forebears argued, biblical faith does not require individuals to renounce their rights to life and self-defense.

A third lesson teaches the importance of moderation. As the French discovered after 1789, revolutions quickly turn brutal without some check on political passions. Sober expectations and a serious desire to maintain legitimate authority – found among the leadership of the Revolution in men such as John Dickinson and George Washington – made it possible for a revolutionary war to end in relative peace at home, as well as peace with England.

Fourth and finally, governing officials must not fail to remember that they hold their power by the will of the people. They abuse that power at their own peril. Citizens never give up the right to remove corrupt leaders from power. It happened in 1776.

It was fortunate, therefore, that the American revolutionaries were statesmen of the highest caliber, coupling wisdom and moderation with firmness in defense of their rights. Their protest was not against all government authority, but against illegitimate government authority alone. As Calvin Coolidge explained 150 years later, these men “had not hesitated to take up arms against tyranny in the Revolution, but having established a government of the people they were equally determined to defend and support it. They hated the usurper, whether king, or Parliament, or mob, but they bowed before the duly constituted authority of the people.” Such behavior remains a model for citizenship in every age.

Thomas Tacoma is assistant professor of history and political science at Blue Mountain College and author of The Political Thought of Calvin Coolidge: Burkean Americanist, forthcoming with Lexington Press.