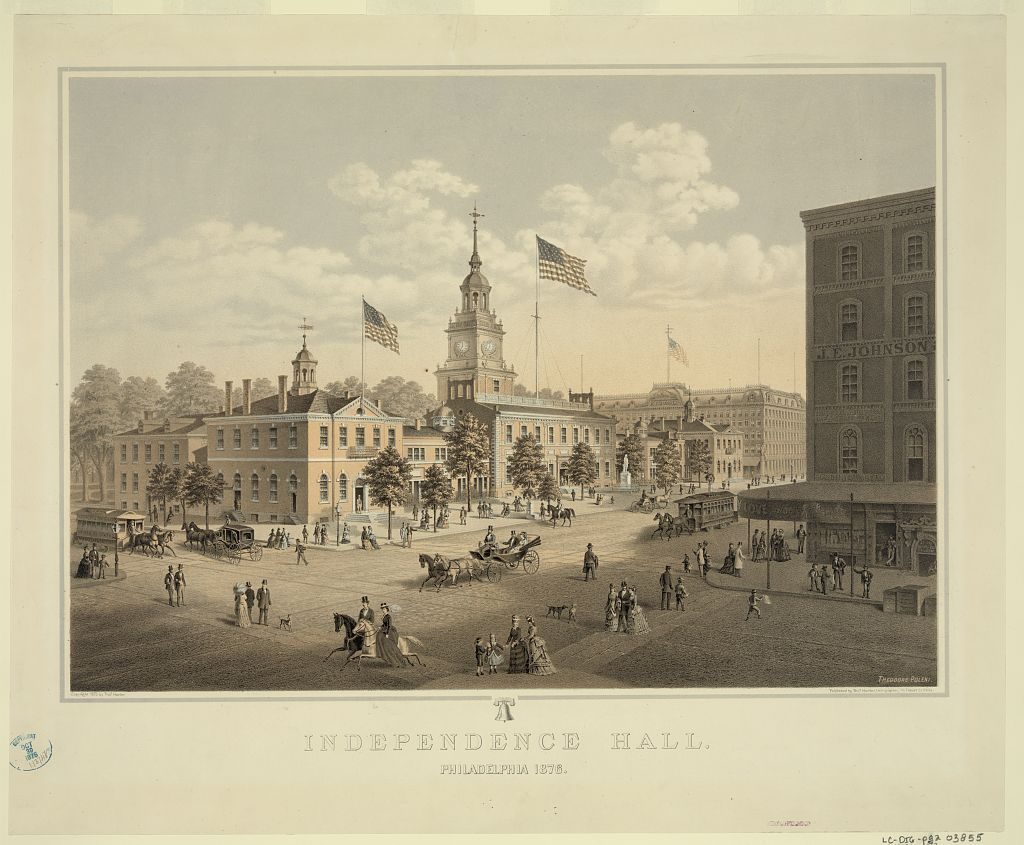 The ultimate lesson Burke drew from the American crisis was starkly opposed to the one suggested by the Declaration: That equality as a guiding principle actually distorts our perception of political justice by blinding us to meaningful and essential differences within a body politic.

The American Revolution is often seen as a historical movement in favor of equality. While throwing off a monarchy in favor of representative democracy, its Declaration of Independence stamped the phrase “all men are created equal” indelibly onto America’s political culture. From the premise of natural equality, the Declaration continued, one could logically deduce a universal set of abstract natural rights possessed equally by all human beings, which all governments must respect. However, one of the colonists’ greatest friends in Britain, Edmund Burke, believed the conflict revolved around a very different conception of equality. Like the more common interpretation of the Revolution, Burke’s view also contains within it the seed of a theory of political right. The ultimate lesson Burke drew from the American crisis, however, was starkly opposed to the one suggested by the Declaration: That equality as a guiding principle actually distorts our perception of political justice by blinding us to meaningful and essential differences within a body politic.

In 1777, Burke wrote to a distant relative that it was a “rage for equality” which had “blown up the flames of this present cursed war in America.” Burke believed that the conflict had arisen because of Parliament’s insistence on a rigid and absolute equality in dealing with its colonies. These colonies had traditionally been allowed exemptions from some of the obligations of British citizens living in Great Britain, most notably the obligation of paying taxes passed by Parliament. It was the British decision to revoke such privileges, Burke believed, which triggered the dispute, and which justified the colonists’ resistance.

In one of his earliest published political writings, the Observations on a Late State of the Nation, Burke offered a refutation of a pamphlet published by William Knox defending the Grenville government’s financial and economic policy. In the Observations, Burke criticized Knox’s outlook on colonial affairs by attacking his conception of sovereignty, which he claimed imputed a false equality across all politically relevant social entities. Knox’s theory of sovereignty assumed a completely homogenous political community, in which all portions relate to the sovereign authority in the same way; all elements of society draw protection from the sovereign, and in turn are subject to the authority of that sovereign. “The sovereign authority,” he claimed, “which rules the whole empire, and is bound to do equal justice to every part, [ought not] to admit of any pleas for exempting the subjects in the colonies from sharing the common burdens, and contributing to the necessities of the state.”

Burke attacked this version of political right by appealing to the considerable diversity which made up the British Empire. Many “establishments,” he claimed, including banks, trading companies and colonies, contributed to the well-being of the whole in unique ways. The colonies were bound by restrictive trade policies which required that Britain possess a monopoly on their produce and consumption. Given their unique status, it was wrong to assume that equity demanded they be treated in the same manner as citizens of England. By doing so, Parliament imposed an extreme, “rigorous,” and “compulsory equality” on dissimilar elements of society. When speaking of credit and trading institutions, Burke claimed that they “stand…upon a principle of their own, distinct from, and in some respects contrary to, the relation between prince and subject. It is a new species of contract superinduced upon the old contract of the state.” He proceeded to apply the same logic to Ireland and to the American colonies. Burke’s conception of political authority, therefore, accommodated a diversity of relationships between state and society formed in response to particular circumstances.

BURKE SUGGESTS THAT MORAL REALITY IS ULTIMATELY MYSTERIOUS AND BEYOND OUR ABILITIES TO EASILY COMPREHEND THROUGH ANY SIMPLE, SYSTEMATIZED MODEL.

Burke’s rejection of this false equality has important implications for the very notion of sovereignty as a foundational concept of political justice. When Knox and others appealed to rights of sovereignty to defend the taxation of colonies, they relied on the belief that those rights were the standard of political justice: To justify the use of a given power, one needed only to demonstrate that the power fell within the purview of parliament’s sovereignty. It was, therefore, an appeal to an absolute moral standard based on original equality and consent: The “old contract” may refer either to a Hobbesian social contract which established sovereignty on the basis of the hypothetical consent of completely free and equal individuals, or to what was known as the “original contract” between society and rulers by which the former pledged obedience and the latter promised protection. Either of these paradigms assume that an agreement has been made which has established the limits of legitimate power, thereby giving moral weight to actions taken by those entrusted with sovereign power.

Rather than serving as a moral standard, however, Burke believed that an appeal to sovereignty had the opposite effect of elevating a legal in place of a moral understanding; of subsuming the moral into the legal. If legal institutions like Parliament have already been validated by the moral standard of consent, then one need only demonstrate the legality of political action to prove its morality. Burke believed this to be a narrow and distorted conception of right action; a “subordinate artificial justice.” In the Observations, he warned against basing colonial policy upon mere legality: Whether his proposal for colonial relations could “be reconciled in legal speculation,” he argued, “is a matter of no consequence. It is reconciled in policy.” Burke suggests that this legalistic political morality is an attempt by human reason to grasp and systematize moral reality, which is ultimately mysterious and beyond our abilities to easily comprehend through any simple, systematized model.

Five years after the Observations, in his famous “Speech on American Taxation,” Burke commented that training in the law did much to “quicken and invigorate the understanding,” but cautioned that “it is not apt, except in persons very happily born, to open and to liberalize the mind exactly in the same proportion.” Law has the effect of energizing the reasoning faculties, while simultaneously narrowing moral vision. By viewing political justice through the limited paradigm of sovereignty derived from a hypothetical contract, he believed, a man could blind himself to gross injustice, so long as it is made in the name of that contract: There are rights, he claimed, “which, in their exercise under certain circumstances…[are] the most odious of all wrongs, and the most vexatious of all injustice.” So little weight did Burke give to the idea of sovereign power justified by equal consent, that he declared that even had the colonists signed a solemn contract explicitly giving up all claims to liberty upon leaving England, it would have no impact whatsoever on how they ought to be governed.

BURKE’S PERSPECTIVE ON THE COLONIAL CRISIS SERVES NOT ONLY TO CRITIQUE THE UNLIMITED SOVEREIGNTY OF KNOX’S THEORY, BUT ALSO THE NATURAL RIGHTS LIBERALISM OF THE DECLARATION.

In keeping with his distrust of legalism, Burke never claimed that Parliament was formally and constitutionally barred from taxing the colonies. Rather, it was limited by a moral assessment similar to the kind that individuals make when determining their moral obligations to one another. Individuals and governments alike must determine moral limits by heeding instinctive emotional responses to injustice, and using reason to assess how relevant circumstances and relationships determine appropriate action.

Burke’s rhetoric and arguments appeal to both the rational and emotional side of this approach. The colonies had lived for over one hundred years without direct taxation from Parliament, and their unique position within the British empire offered a valid reason for such differentiation. Furthermore, he argued, the human heart was naturally pained to see fellow citizens universally outraged over the denial of rights and privileges they had expected and relied upon for over a hundred years. The only way such emotional reaction could be blunted is if it were overwhelmed by the rationalized distortions springing from the “rage for equality.”

Once relations between Britain and the colonies deteriorated further, Burke came to support a formal, legal prohibition on Parliamentary taxation of the colonies. Nevertheless, this change was only necessitated by the need to reassure the colonists whose trust had been taken advantage of and whose commitment to Britain was at its breaking point. In his second “Conciliation” speech of November 16, 1775, for instance, Burke described the evolution of his views on the legal relationship between Parliament and the colonies:

“[He declared] That he had always wished to preserve the legislative power of this kingdom entire in everything; and that it was with great grief he saw, that even an odious and scarcely ever to be exercised part of it [the colonial taxing power], was to be abandoned. But when the maxims of public councils are not steady, it is necessary that the laws should supply the want of prudence. That it was thus, and for this reason, that limits had been set to absolute power in all countries; and that power (though not absolute) had been preserved, not destroyed by such limitations.”

Formal limitations of power do not spring from a social contract or natural rights. Rather, they are somewhat crude and clumsy reflections of moral prudence which become necessary when moral leadership has failed.

At this point, it becomes clear that Burke’s perspective on the colonial crisis serves not only to critique the unlimited sovereignty of Knox’s theory, but also the natural rights liberalism of the Declaration which, like Knox, pointed to the legal origins of government as the moral standard to which it must be held. But for Burke, the American Revolution was a prime example of the necessity of moral prudence grounded on keen perception of circumstance, the diversity of social life, and the same kind of emotional responses to injustice which guide personal morality. That the same events should inspire such divergent reflections on the nature of political right is indicative of the delightful complexity and nuance of the American founding which makes its study an endlessly productive endeavor.

John G. Grove is Assistant Professor of Political Science at Lincoln Memorial University. His first book, John C. Calhoun’s Theory of Republicanism, was published in 2016 by the University Press of Kansas. He is currently working on a project examining Burke on political institutions and moral perception.