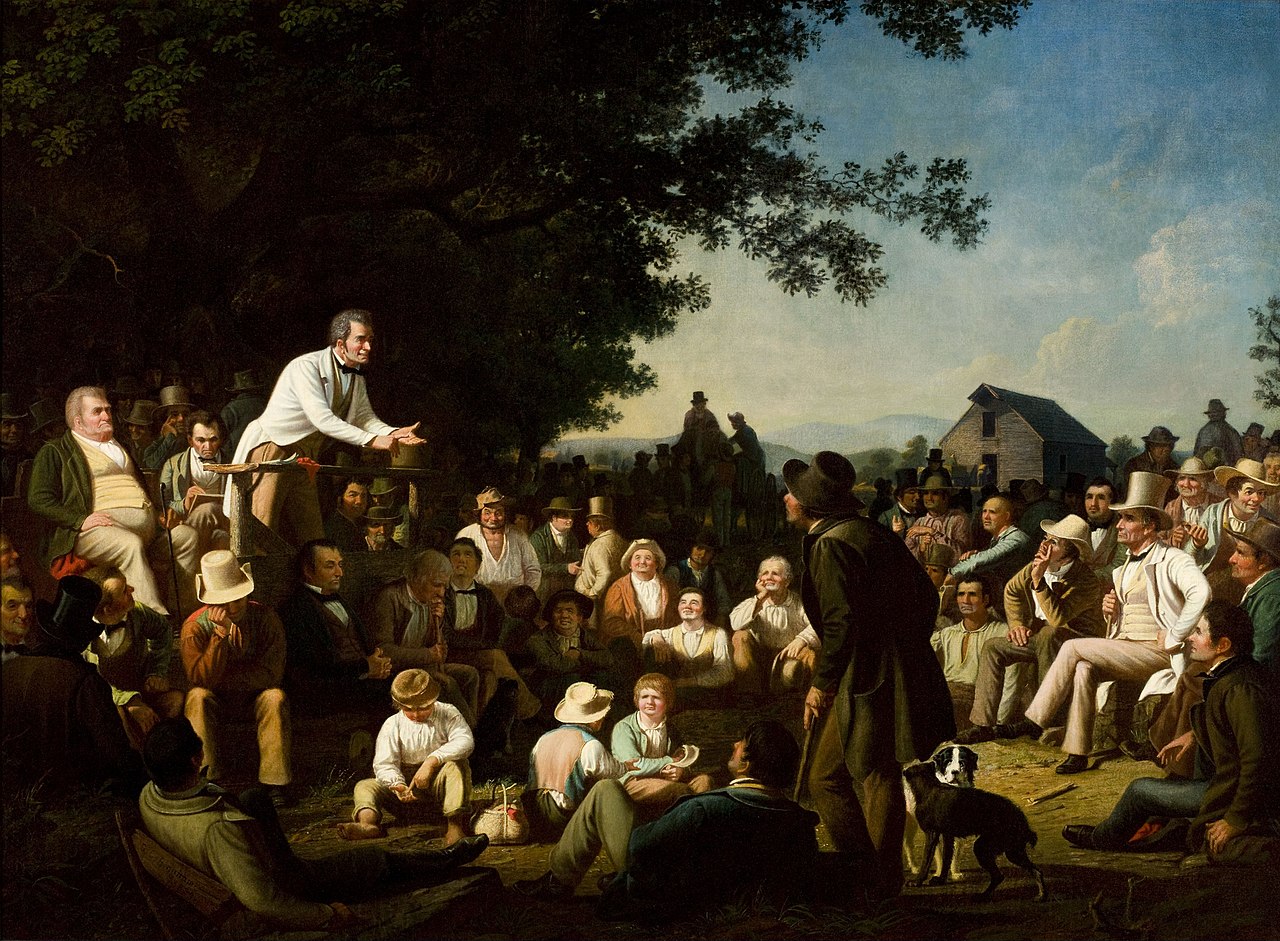 It is characteristic of every age under our Constitution that Americans are prone to see contemporary challenges to the national charter as dire, perhaps unique—or to see the Constitution as urgently in need of being challenged, or changed.  Justice Scalia observed, in the Tanner Lectures published as A Matter of Interpretation, that the Constitution’s—any constitution’s—“whole purpose is to prevent change.”  But people who want certain changes chafe under a Constitution that fails to provide or perhaps even permit them.

Others who reject or resist certain changes turn to the Constitution to find the means to resist them—even if it cannot provide those means.  Still others, in pivotal constitutional moments such as the post-founding era and Reconstruction, have attempted to maintain a status quo ante that the Constitution itself changed—and so they challenged the Constitution by reinterpreting it to deny its manifest meaning, or simply defied it.

So, in the Marshall Court period, states’ rights doctrines represented a denial that (as John Marshall put it) the American people had exchanged their old league, under the Articles of Confederation, for a real government under the Constitution.  Whether he was vindicating the supremacy of his Court over state courts on the decision of federal questions, or validating the breadth of legislative power granted to Congress, or reminding states that they operated under the constraint of federally protected rights, Marshall spent his long career putting out brush fires set by partisans who challenged the basic structure of the Constitution.

So too, in the collapse of Reconstruction, the Jim Crow South defied the restructuring of the Constitution effected by the Thirteenth, Fourteenth, and Fifteenth Amendments, and disenfranchised, degraded, and oppressed African-Americans for well-nigh another century.

These two historical examples, from the early and the late nineteenth century, have something in common that sets them apart from the challenges of our own time.  They were instances of resistance to constitutional norms from the country’s periphery, not from the center of the Union.  They were, each in its own way, resistance movements led by elites; but they were not Washington elites.

Today our case is different.  Today the observable challenges to the Constitution that should most concern us come largely from Washington elites whose agendas are frustrated by basic constitutional norms and institutions.  To say nothing of the usual efforts to make inroads on individual rights, we now hear prominent figures on the left—persons in high office or running for it—calling for policies that are either a) plainly unconstitutional, or b) threaten norms like the separation of powers, or c) propose to amend the Constitution in thoughtless or ill-considered ways.

In the first category, the plainly unconstitutional, is Senator Elizabeth Warren’s idea of a “wealth tax.”  Such a levy on static assets such as real or personal property not in motion (at point of sale, for instance), nor on the income earned from those assets, is a direct tax under Article I of the Constitution.  It would thus have to be apportioned by the populations of states as recorded in the most recent census—a requirement that renders such a scheme so cumbersome and nonsensical that it simply cannot be administered.  (And if it could, think about the onerous reporting requirements connected with our income tax, and ponder for a moment the potential burden of reporting required for collection of a wealth tax.)

In the second category, inimical to the separation of powers, is the current popularity of “Court-packing” among leading Democrats, especially those running for president.  I confess a certain admiration for Franklin Roosevelt’s 1937 Court-packing plan, for FDR had a good case against the Hughes Court’s activism during his first term as president.  But the scheme was ill-executed, Roosevelt hadn’t run on it as a plank in his 1936 reelection, and at first he sold it disingenuously as an efficiency measure.

FDR’s scheme failed because of the widespread perception that it was a direct assault on the independence of the judiciary.  Perhaps his retort should have been that like many other good things, an independent judiciary was something one can have too much of.  But today’s Court-packing aficionados have nothing like Roosevelt’s case against the judiciary of his day.  They do not argue—as he did when he owned up to his real case for adding justices—for a more restrained Supreme Court than the present one.  They simply want results, whether it is to deprive corporations of First Amendment protection or to securely anchor abortion rights.

In the third category, of thoughtless proposals to change the Constitution itself, is the renewed effort to do away with the Electoral College.  After the 2000 and 2016 elections, the left’s rage against the Electoral College is understandable.  Yet, the ‘rules of the game’ have always been plainly known to both parties, as has the need to widely distribute votes in order to win a presidential election.

Several weeks ago, the last great intelligent opponent of the Electoral College passed away—former senator Birch Bayh of Indiana.  To read the current amendments proposed by Democrats, in today’s Congress, for doing away with the Electoral College, is to experience an intense nostalgia for Bayh.  The Hoosier senator understood something that today’s opponents apparently do not.  As it has come to be structured, through the choices of state legislatures (currently 48 of 50, anyway) to award their electoral votes in whole blocs to the candidates who win first-past-the-post pluralities statewide, coupled with the constitutional requirement of a majority of electoral votes to win the presidency, the Electoral College strongly biases our presidential elections in favor of the existing two-party system.

Bayh’s amendment, in 1977, accounted for the high probability that a simple national popular-vote plebiscite would give rise to a new system of multiple plausible candidates, not just two.  This would mean, over time, a likelihood of ever smaller pluralities being racked up by the winning candidate—if a mere plurality sufficed for victory.  Thus the Bayh amendment provided that, in the event that no candidate got at least 40% of the national popular vote, a runoff election would be held between the two candidates with the most votes.

As the late Martin Diamond explained, on the last day of his life, giving testimony before Bayh’s Judiciary Committee, the senator’s amendment was fraught with problems and would probably make our political life more divisive, turbulent, and unstable, without any offsetting gains in democratic legitimacy.  But at least Bayh understood that we cannot simply choose a plurality president in a national plebiscite, regardless of how small that plurality is.  And this recognition is entirely missing from the three amendments currently on offer in the 116th Congress (by Rep. Cohen and by Sens. Schatz and Merkley), each of which would simply anoint a plurality president, even if 90% of the voters cast their ballots for someone else.  These are ill-considered amendment proposals indeed.

Challenges to the Constitution, I hasten to add, do not all come from the left.  Some emerge on the right as well.  While impeachment of President Trump seems unlikely, and half of the country’s political energy seems to be expended in reacting to his Twitter feed, it is truly unfortunate that the president responded to a straightforward defeat of an administration spending request by declaring a “national emergency” to get the money Congress declined to appropriate for his wall on the Mexican border.  There is a fig leaf of cover for this gambit in a statute, but it is a serious breach of legislative prerogative and constitutional norms nonetheless.

And I would remark also that one additional challenge to the constitutional order is an emerging enthusiasm in some conservative quarters for what is called “judicial engagement.”  This impulse travels under the rubric of a highly theorized form of “originalism” in constitutional interpretation, but the case to be made for its understanding of the judicial power under our Constitution is dubious at best.

I began by quoting Justice Scalia, and it should be recalled that, for Scalia, one of originalism’s great virtues is the constraint it exercises on judicial review.  Today there are theories arranged under the banner of originalism that have, alas, little truck with the virtue of restraint so prized by Justice Scalia.

The thing needed today, I believe, is a recovery of certain time-honored doctrines in constitutional interpretation.  The foremost of these, which a century and a quarter ago James Bradley Thayer called the American doctrine of constitutional law, is the presumption of constitutionality.  This was a presumption that Thayer stated and defended in a very strong form, such that any reasonable reading of the Constitution’s meaning, even if not the best one in the view of judges charged with deciding a case, will suffice to uphold legislation challenged as unconstitutional.

Thayer is out of fashion nowadays.  But in a forthcoming article in American Political Thought, I set about the task of rehabilitating his argument, and rescuing him and his presumption from several decades of distortion and misunderstanding.  My hope is that, once he is understood better, Thayer and his case for judicial restraint will once again have their day.

Matthew J. Franck is Associate Director of the James Madison Program in American Ideals and Institutions and Lecturer in Politics at Princeton University. This article is based on remarks given at the “We the People: Fidelity to the Constitution” conference on April 13, 2019, in Chicago, IL.