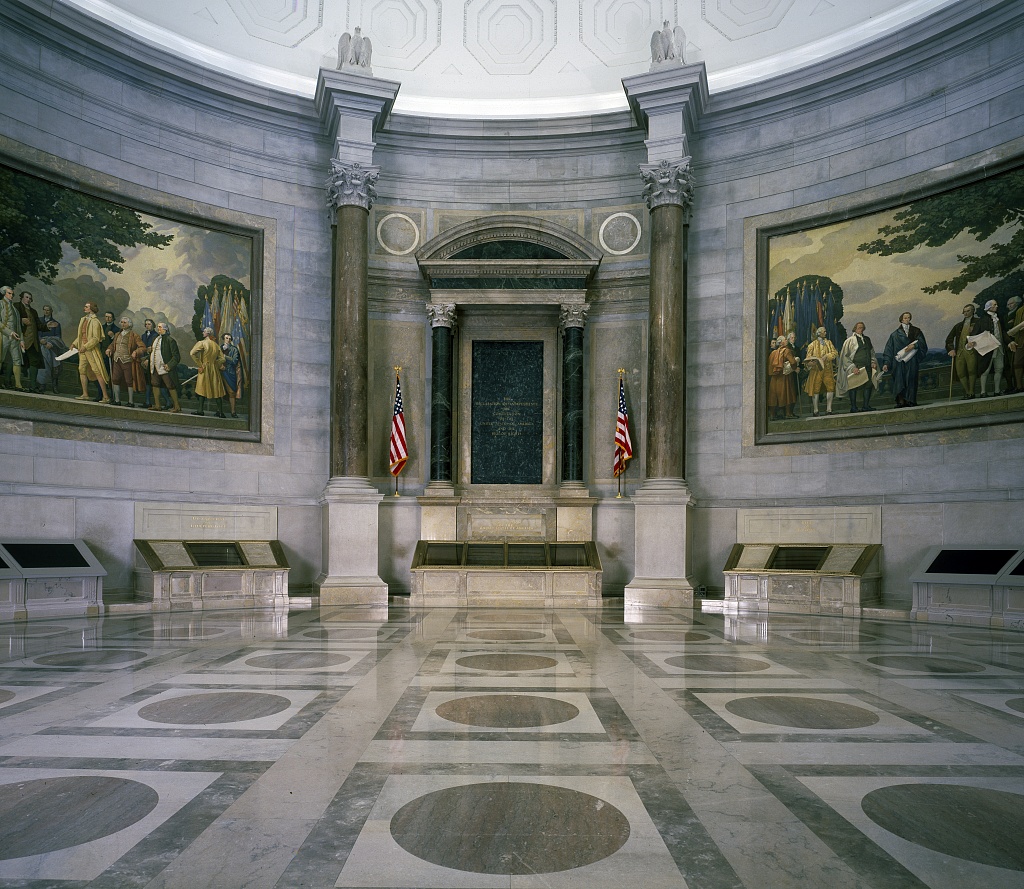 Whatever one may think of President Trump, perhaps the greatest hope for Making America Great Again is not found in a particular president but in the American people’s own charter of government: The Constitution of the United States.

H.L. Mencken famously defined democracy as “the theory that the common people know what they want, and deserve to get it good and hard.” In a rarity for presidential elections, both of the 2016 major party nominees—Donald Trump and Hillary Clinton—had extremely high name recognition and extremely high unfavorable ratings. In 2016, the American people knew whom they were getting, and—for good or ill—they’ll get President Donald Trump good and hard.

Whatever one may think of President Trump, perhaps the greatest hope for Making America Great Again is not found in a particular president but in the American people’s own charter of government: The Constitution of the United States. How does the Constitution of 1787 comport with the 2016 election of Donald Trump? It addresses and moderates one of his biggest strengths and one of his biggest weaknesses: his unquestionable fame and his questionable character.

NO OFFICE IN THE CONSTITUTION WAS DESIGNED WITH AS MUCH ATTENTION TO THE “LOVE OF FAME” AS THAT OF THE PRESIDENCY.

First, consider his fame. The very fact that almost every American voter could recognize the name “Donald Trump” raised an interesting question: What compelled him to pursue the presidency at all? Although one cannot discount his desire to make a positive difference in the country, one should likewise not discount the allure of fame as a driving force in his pursuit of the office. Trump had secured fame in the “low” sense. His long and controversial business career made him a household name, not to mention a TV star and Internet celebrity.

While attainment of this “low” fame is noteworthy and may have permanently secured Trump’s place on the hallowed pages of Wikipedia, the Constitution itself provides the opportunity to pursue a kind of “high” enduring fame in the presidency. After all, what does serving as host of The Apprentice have on the permanency of a place on Mount Rushmore? Trump would certainly not, of course, be the first to understand this distinction.

As Alexander Hamilton put it in Federalist 72, the “love of fame,” which resides in “the ruling passion of the noblest minds,” would serve as an ennobling inducement for certain would-be presidents. Yet, as political scientist James W. Ceaser wrote in Designing a Polity, “The love of fame has a double-edged quality. It can prompt men to undertake actions for the good of the community, but it can also lead them to sacrifice that good for their own benefit.”

Perhaps no one articulated the dangerous consequences of unbridled fame-seeking better than Abraham Lincoln in his 1838 Lyceum Address:

“Many great and good men sufficiently qualified for any task that they should undertake, may ever be found, whose ambition would aspire to nothing beyond a seat in Congress, a gubernatorial or a presidential chair; but such belong not to the family of the lion, or the tribe of the eagle. What! think you these places would satisfy an Alexander, a Caeser, or a Napoleon? Never! Towering genius disdains a beaten path. It seeks regions hitherto unexplored. It sees no distinction in adding story to story, upon the monuments of fame, erected to the memory of others. It denies that it is glory enough to serve under any chief.”

How did the American Founders attempt to remedy this intractable problem? Instead of trying to eliminate the toxic tendencies of human nature, they formed the very workings of government around those common qualities. According to Hamilton, the institutions of the Constitution could be formed to stimulate representatives to pursue the public good in order to secure their own “desire for reward.” Thus, Hamilton wrote that the “love of fame,” properly channeled, could “prompt a man to plan and undertake extensive and arduous enterprises for the public benefit.”

No office in the Constitution was designed with as much attention to the “love of fame” as that of the presidency. As Ceaser further explained, a proper “love of fame,” under the correct institutional arrangements, “can help a president resist cultivating temporary popular favor and turn his attention instead to the rewards of posterity.” Put differently, the presidency produces a kind of “high” or, one could say, “constitutional” fame that might compel even the most ambitious individuals to pursue a long-term public good that earns enduring fame from future generations.

The unique design of the presidency provides some insight to this truth. As Hamilton said in Federalist 70, “energy in the executive is the leading character in the definition of good government.” With only one president, no one else rivals him for the use of executive power, and the broad responsibilities assigned to him in Article II were all meant to contribute to the energy that a unitary executive could provide. So, although Trump criticized former Florida Governor Jeb Bush for being “low energy,” he was only half right. While energy is important, it’s the energy of the office that is indispensable, not necessarily the energy of the person holding the office.

The Federalist also teaches that the reelection incentive compels presidents who lack the ideal wisdom and virtue to act in ways that produce the public good. “An avaricious man,” for example, “who might happen to fill the office” will still seek admiration from the people in order to achieve re-election, if only to satisfy his own avarice. Likewise, an “ambitious man…seated on the summit of his country’s honors” will still pursue actions that elicit reelection in order “to prolong his honors.”

The form of Article II provides sufficient weight to the presidential office to secure its independence as well as its lure. It’s an office that even those who have achieved the heights of “low” fame seek to acquire, and, once acquired, channels their individual ambition into pursuit of the common good. In an important respect, the Constitution can elevate a mere politician (or businessman) into someone with immense constitutional stature. This is part of the genius of the Constitution. Still, while Trump may pursue the presidency in order to achieve this “high” enduring fame, what can the Constitution do to contend with his widely known and discussed character flaws?

As Joseph M. Bessette and Jeffrey K. Tulis wrote in The Constitutional Presidency, the Constitution can forcefully “mold political behavior.” Much has been made of Trump’s perceived temperament problems. Whether it be his knack for questionable comments (hello Twitter!) or unnecessary public debates, the American people have taken notice. Yet, even though the “Trump Presidency” is solidly underway, it is the “Constitutional presidency” that provides the touchstone of his power while simultaneously moderating his actions. This truth should serve as a relief to those in the #NeverTrump movement. While it is certainly true that each individual president puts his personal stamp on the office, it is equally true that he must work within the confines of the Constitution itself.

Article II provides some such restraints. For example, the thirty-five-year-old age requirement and election via the Electoral College were both designed to restrain the president in important ways. According to Jeffrey Tulis, the age limit was meant to promote, as much as possible, persons of revealed character and virtue to the office, thus excluding less accomplished political actors. Moreover, the Electoral College, although operating differently than originally designed, still forces successful presidents to win a broad swath of states from across the nation. In important ways, this system induces moderation on the part of candidates and helps promote effective governing.

Moreover, the broader constitutional order also molds presidential behavior. The Constitution creates a kind of institutionalized conflict between the branches that proves much more effective than mere “parchment barriers.” “The interest of the man,” Madison wrote in Federalist 51, “must be connected with the constitutional rights of the place.” Each branch, therefore, will take actions to defend its own institution from encroachment by another branch. The ambition of a Trump presidency would be counteracted by the ambition of even a Republican-controlled House and Senate, the Supreme Court, and the individual states. This institutionalized conflict not only assists in preventing tyranny but also in producing good government. It does so by encouraging sound deliberation amongst the branches in order to elicit good policies.

Therefore, not only does the Constitution’s unique executive office create a kind of “high” fame that moderates presidential action, but the requirements to attain the office and the restraints imposed on it by the other branches likewise mold presidential behavior. Although these restraints alone cannot prevent a would-be tyrant from emerging, they do show how the Constitution attempts to forestall such an outcome. Put differently, as long as the Constitution itself remains effective, the president will not be reduced to a mere city manager on the one hand or an uncontrollable tyrant on the other.

IN AN ELECTION CYCLE WHEN MANY LAMENTED THE CHOICE OF PRESIDENTIAL CANDIDATES BEFORE THEM, IT IS THE CONSTITUTION ITSELF THAT MAY ULTIMATELY SAVE THE REPUBLIC.

One final point should be made regarding the president’s unique place in the constitutional order. Although he has various powers at his disposal, those powers serve, or fulfill, his constitutional duties. As Joseph M. Bessette and Gary J. Schmitt explain, “it is duty that lies at the heart of the constitutional presidency.”

The aforementioned Abraham Lincoln, who warned of unbridled tyrants in the 1830s, provides an apt case study on this point. At first glance, Lincoln may seem a fulfillment of his own gloomy prophecy. Although he took controversial actions as president throughout the Civil War, he grounded them in Article II of the Constitution, exercising certain powers (like the commander-in-chief power) in order to fulfill his duty to preserve the Constitution and ultimately preserve the nation.

Thus, the presidential oath attempts to ensure the integration of constitutionalism in the day-to-day operation of politics, even crisis politics. The Framers believed this unique public oath may further motivate the president to abide by the Constitution in a way he might not do otherwise.

And so it is that in an election cycle when many lamented the choice of presidential candidates before them, it is the Constitution itself that may ultimately save the republic. Last month President Trump stood on the steps of the Capitol and took the presidential oath, making him alone duty-bound to “preserve, protect, and defend the Constitution of the United States.” Let’s pray he does, so help us God.

Andrew D. Carico is an Assistant Professor of Public Policy at William Jessup University and a Ph.D. candidate in Political Science at Claremont Graduate University.