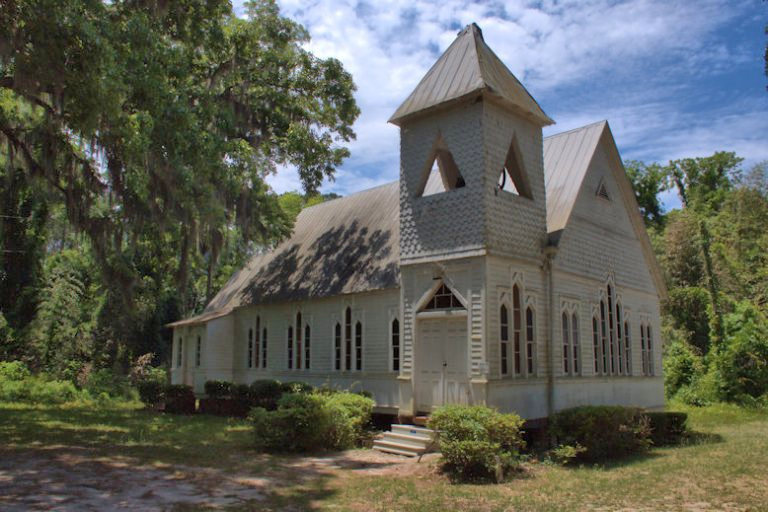 On June 4, 1870 Joshua C. Legree opened an account with the Savannah, Georgia Branch of the Freedmen’s Bank. Three years earlier, Legree had been among the first to register to vote under the terms of the 1867 Reconstruction Act. Both his political activity and desire to save the fruits of his labor underscored his determination to establish an independent life for himself, his wife Mary, and daughter Rina.

For four decades, Legree remained politically active in Lowcountry Georgia, consistently paid poll taxes to retain voting rights, and built an economic foundation that included land and other property. Elected as the first mayor of Burroughs, Georgia in 1898, J.C. Legree relied on a network of men and women who shared the same collective experience of dispossession to build a political base. During Reconstruction, Lowcountry Georgia, a five-county region that extends from Savannah to St. Mary’s Georgia, served as the territorial nexus for African American social, political, and economic activism.

The first half-decade following the end of the Civil War witnessed the fermentation of resistance strategies as African American struggles for land redistribution, self-protection, the vote, and a fair settlement for wages stimulated group consciousness and unity. The formulation of overt collective acts designed to secure land, fair wages, and obfuscate adverse federal, state, and local policies provides context for examining what John David Smith refers to as change and discontinuity in “inherited geographies of race, space, and place.”

Change and discontinuity were most evident in the triad counties of Chatham, Liberty, and McIntosh. In these counties, failed federal land policy served as the lever that sharpened the perceptions of African Americans who developed strategies to counter adverse federal, state, and local policies. African American opposition included both individual and community resistance, formalized organizational protest, and armed resistance.

Historian Eric Foner identified landownership as the central component of the black economic agenda. Black landownership would have a transformative impact on the southern economy and foster self-sufficiency. Only in the Lowcountry rice region, however, did the ideal come to fruition. Although rice production in the Lowcountry never regained its prewar profitability, the power of local black politicians was paramount to establishing the region as a symbol and stronghold of black economic and political clout through landownership.

During the waning years of Congressional Reconstruction, the use of force through intimidation and violence by vigilante organizations such as the Ku Klux Klan, the Jayhawks, and the Regulators proscribed the tenets of free labor ideology throughout the South. The activities of the Klan had their origins in the labor troubles that emerged with the destructions of slavery and the enfranchisement of African American men. This politicized the Klan’s reign of terror and led to the success of what John Hope Franklin termed “counter Reconstruction.”

In the 1874 Georgia elections, only three counties maintained a black voting majority and elected African American men to the state Legislature: Liberty, McIntosh, and Glynn counties. The redemption of the state government, which consisted of 41 Democratic Senators and 156 Democrats in the House, succeeded in diminishing the Republican presence in state politics as evidenced by the fact that only Liberty and McIntosh counties elected an African American representative to the state Legislature by 1884.

The ideology of white supremacy defined American social reality during the second half of the nineteenth century. The half-decade that witnessed the redemption of the South reinforced white supremacy and the idea of a democracy for whites only. The Compromise of 1877, which certified Rutherford B. Hayes as President, marked the end of a tumultuous era. As the federal government abjured interfering in the affairs of the South and consented to the removal of federal troops, the Republican Party frayed into two factions—this split ultimately weakened the viability of the party in the South and underscored the Republican Party’s weakened position toward protecting the political and economic rights of former enslaved people.

By 1888, the number of African American legislators was cut down to two: Anthony Wilson of Camden County and S.A. McIvor of Liberty County. Wilson and McIvor were among the first to register to vote in 1867 under the Reconstruction Acts. Both men had carved a political niche for themselves in their respective counties by serving as school teachers and political leaders in Camden and Liberty County.

Throughout the 1870s and 1880s, local African American leaders labored to ensure the longevity of the Republican Party by organizing rallies and attending state Republican Conventions to ensure voter turnout in local elections and foment support for national elections. In McIntosh County, Republican voters assembled in front of the old Court House in Darien in July 1876 to choose two delegates to attend the District Convention scheduled to convene on August 10th in Savannah, Georgia. The meeting was called to order by Allen C. Gould, who was elected chairman.

The committee elected Samuel Russell and Allen C. Gould as delegates. The biracial convention adopted strong resolutions endorsing Rutherford B. Hayes and William A. Wheeler for President and Vice President of the United States. The convention’s executive committee consisted of Hamilton Curry, Allen C. Gould, Lectured Crawford, P. C. Dollie, and Peter Maxwell. Each of these local leaders, and two local white leaders, W.H. Way and J.W. Corker, attending the convention, made a series of copacetic speeches in support of the Republican Party.

Local leaders in Chatham, McIntosh, Liberty, Glynn, and Camden Counties were connected to leaders in Savannah through political and fraternal networks. The region’s African American newspaper, the Savannah Tribune, provided access to public community space for political activism. Political networks derived from inter-island ties that local leaders such as former slaves J.C. Legree of Chatham County and William A. Golding of Liberty County helped establish. Golding, who served as a “delegate” of local freed men and women through his employment by the Freedmen’s Bureau, held court sessions in Liberty County where he, along with other former slaves, wrote letters complaining of the conditions in the Lowcountry. In one such letter Golding stated:

WE CANNOT LABOR FOR THE LANDOWNERS AND KNOW THAT OUR INFIRM AND CHILDREN ARE NOT PROVIDED FOR AND NOT ALLOWED TO EDUCATE OR LEARN MORE THAN THEY WERE PERMITTED IN SLAVERY. WE ARE A WORKING CLASS OF PEOPLE AND WE ARE WILLING AND ARE DESIROUS TO WORK FOR A FAIR COMPENSATION. BUT TO RETURN TO WORK UPON THE TERMS THAT ARE AT PRESENT OFFERED TO US WOULD BE WE THINK GOING BACK INTO THE STATE OF SLAVERY

Like other Lowcountry leaders, such as Aaron A. Bradley and Tunis Campbell, Golding wedded politics with a desire for social and economic justice. His service in Georgia’s constitutional convention of 1867, the Georgia House of Representatives in 1868, and the Georgia labor convention reflected a commitment to the advancement of fair compensation. Although the Georgia House of Representatives expelled Goldring, along with other African American legislators, on the grounds that the right of black men to vote did not necessarily translate into a right to hold office, Goldring continued to give voice to the labor concerns of African Americans in the Lowcountry.

Leaders like Bradley and Goldring used their social capital to promote identity politics in the Lowcountry. Through organizations such as the Union League and the Georgia Colored Farmer’s Alliance, they endeavored to push against neo-dependency and neo-paternalism. Since the end of the war, the Union League provided former slaves with a platform to express their views on political, social, and economic matters.

Men, such as Dandy Stewart, relied upon these organizations to maintain political spaces for their own intellectual praxis. Elected to the Darien County Board of Commissioners in 1878, Stewart, who remained an engineer and blacksmith during the 1870s, along with his son Dandy Stewart Jr., who labored as a farmer, remained commissioners throughout the 1880s.

During the late 1880s and early 1890s, the Georgia Farmer’s Alliance became the principal vehicle for welding free labor ideology with fair compensation. Organized in Troup County in 1884, the Colored Farmer’s Alliance at its peak boasted a membership of 90,000, that included a significant number of women. The significance of this movement became evident in the construction of a Farmer’s Alliance Hall on Sapelo Island during the 1880s, where residents held political meetings to discuss the community’s economic concerns.

African American Alliance members elected African Americans to local county positions and were instrumental in electing two African Americans, Lectured Crawford of McIntosh County and J. M. Holzendorf of Camden County, to the Georgia state legislature in 1890. The gradual decline of the Colored Farmer’s Alliance in 1893 was coeval with deteriorating race relations throughout the state.

Dandy Stewart lived on Butler’s Island throughout the Reconstruction and post-Reconstruction periods. He remained politically active in Lowcountry politics throughout 1890 until his death on May 23, 1891. His service on the Board of Commissioners for Darien, Georgia and his duties as Coroner for McIntosh County had earned him the respect and admiration of black and white citizens alike.

Like other former slaves, Stewart carved out spaces of freedom from former plantation lands. Through his labor as an engineer and blacksmith, Stewart earned wages to purchase 30 acres of land on Butler’s Island. Stewart, like many other African American men in the Lowcountry, continued to pay poll taxes to remain politically active and give voice to the region until his death. Not unlike other late nineteenth century African American families, Dandy Stewart left a legacy for his son, who continued his father’s political activism as the economic and political challenges of the 1890s continued.