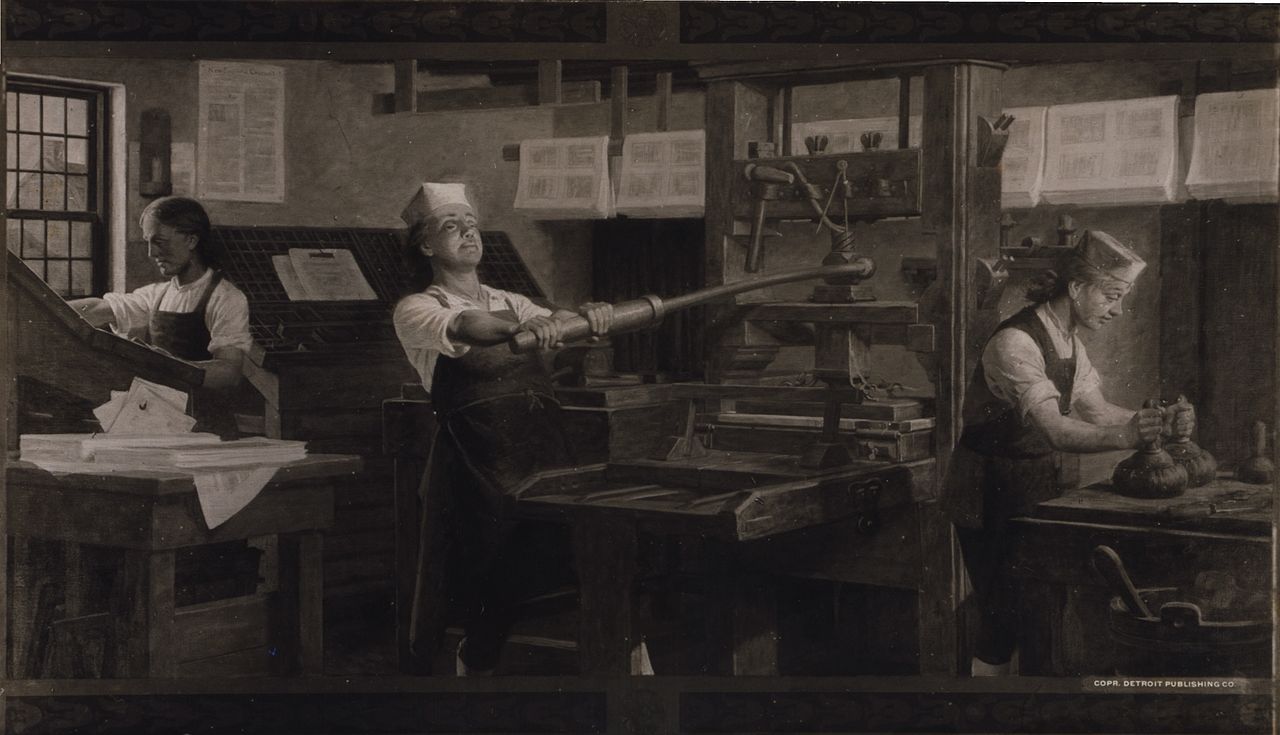 Just as today debate rages over lockdowns, therapies, and vaccines to combat the COVID-19 epidemic, so too in the Boston of Benjamin Franklin’s youth Smallpox inoculation was the subject of contentious public discussion. The argument was dominated, politically if not numerically, by the proponents of inoculation. Prominent physician Zabdiel Boylston, The Mathers (Boston’s preeminent political family), and the city’s two weekly newspapers all supported inoculation. In public discourse and popular press, opposition to inoculation was not only unrepresented, it was also, at times, intemperate and even violent—one opponent of inoculation threw a bomb through the window of Cotton Mather’s home. The undetonated explosive came with a note attached declaring “Cotton Mather, you dog dam you: I’ll inoculate you with this; with a Pox to you.” It was in this turbulent context, of both the Smallpox outbreak and subsequent debate, that Benjamin and brother James Franklin first entered public life.

The opportunity that the Franklins seized was a consequence of the character of the Smallpox episode. That debate was distinguished then, as our debate around COVID-19 and the response to it is now, by an incomplete understanding of the illness and, as such, a shortage of evidence to support the public response. It was in the midst of this initial public backlash that the Franklins saw their opportunity. The Franklin brothers’ role in the Smallpox debate raises an important question about the consequences of the initial shortage and the eventual growth of scientific knowledge in politicized environments. It also highlights the unique temptation, emerging from the early stages of such crises, to use the ensuing chaos as a ladder for personal gain.

The Franklins saw their opportunity in the unrepresented anti-inoculation faction and gave it voice with their new paper, The New England Courant. James Franklin had other motives for starting the paper too, but as its early editions indicate, serving the anti-inoculation audience was an undeniable priority. Its third edition declared that the primary purpose of the paper was to oppose what the Franklins called “the doubtful and dangerous practice” of inoculation. This opposition meant printing the letters of William Douglass, a doctor opposed to inoculation— letters that had previously been unable to find a venue. By serving in print those Bostonians who were opposed to inoculation, the Courant began Benjamin Franklin’s rise, first in printing and ultimately in the world. Only a few years later, he would become a passionate proponent of inoculation, but as a very young man Benjamin Franklin apparently believed enough of the anti-inoculation message to promote it in the pages of The Courant.

Writing almost seventy years later, reflecting on his long life, Franklin passed silently over the Smallpox controversy in Boston and the brothers’ role in it. Instead, in his Autobiography, Benjamin Franklin spoke of Smallpox only in terms of the death of his son Francis. Franklin bitterly regretted the loss of “A fine Boy of 4 Years old, by the Small Pox” and even as he wrote, decades later, he was still haunted by the “regret that [he] had not given it to him by inoculation.” Franklin suggested to his readers that the risk of small pox inoculation, while not negligible, was worth it for the simple reason that those “who omit that Operation on the Supposition that they should never forgive themselves if a Child died under it; my Example showing that Regret may be the same either way.”

Franklin left no account to indicate what converted him to the cause of inoculation. For that matter, neither James nor Benjamin Franklin left a record of whether or not they themselves were ever inoculated. Nonetheless, it remains the case that In 1730, a dozen years after he helped launch The New England Courant, Franklin first defended inoculation from his new home and in his new paper, The Pennsylvania Gazette. He promoted the practice within the paper’s pages again a year later.

He expanded the audience for his message further in 1737—in the aftermath of Francis’ death—now writing for a much larger audience in Poor Richard’s Almanac. There he wrote verses both encouraging the practice and lamenting the pain of losing a child. Later still, now as the world famous “Dr. Franklin,” he provided the preface to an important pamphlet promoting the practice. With this record and considering his legacy, as a scientist and a disseminator of scientific knowledge, it is understandable that Franklin would choose to overlook his early collaboration with the opponents of inoculation.

Indeed, it was as an emerging public figure that Franklin was first compelled to address his personal relationship to the inoculation controversy. When Francis Franklin succumbed to Smallpox in November 1736, Benjamin Franklin was overwhelmed with grief, but also confronted with a burden which may mistakenly seem unique to our own time. As a prominent Philadelphian, and now a proponent of inoculation, Franklin was forced in the weeks after the death of his boy, and in response to persistent rumours regarding the circumstances surrounding Francis’ death, to write publicly not about his loss but about the role of inoculation in it. Now writing to protect others rather than promote himself, Franklin declared “I do hereby sincerely declare that he was not inoculated but received the distemper in the common way of infection; and I suppose the report could only arise from its being known my opinion that inoculation was a safe and beneficial practice;” Franklin had chosen to wait to inoculate Francis because the boy was already sick, likely suffering from some form of influenza and thus not healthy enough to endure the rigours of inoculation. Decades later Franklin would write to his sister Jane Mecom, that the sight of his grandchildren “brings often afresh to my mind the idea of my son Franky, though now dead thirty six years, whom I have seldom since seen equalled in everything, and who to this day I cannot think of without a sigh.”

Save the two acknowledgements in print, first in the Pennsylvania Gazette and later in the Autobiography, Franklin never wrote publicly about the death of his son Francis. He maintained a similar silence on the role that opposition to inoculation had played in the origins of The New England Courant. He left equally unmentioned the part he had played in opposing the practice when discussing how it might have saved his son. In the dedicatory opening of the Autobiography, Franklin wrote to his other son, William, of his hope that his recollections might serve his descendants and that “they may find some of them suitable to their own situations and therefore fit to be imitated.” But some lessons, so difficult to learn, Franklin clearly could not bear to pass on. Franklin wrote eloquently about the risks and benefits of inoculation. But he remained silent about a topic just as important then and now: how we debate complex questions, including those concerning public health, in a time of crisis.

Over the course of his long life, in science and in politics, from the invention of the lightning rod to the Treaty of Paris, Franklin had a keen eye for the opportunities that uncertainty created. What distinguished the inoculation episode from these others was that uncertainty did not create the opportunity, it was the opportunity. As the avatar of the American Enlightenment, Franklin built his reputation on providing answers to complex questions. But as a very young man, he got his start by cultivating controversy. Then as now, it is not always easy to tell the difference between the two. However, Franklin’s silence on his part in the Boston inoculation debate, in contrast to his ready admission of other errors and indiscretions, suggests that he understood the part that he had played.

The sheer range and quantity of scientific discovery represents one of the most remarkable aspects of the Enlightenment. Like the increase in life expectancy and the rate of economic expansion, the growth of scientific knowledge occurred at a pace palpable to people at the time. The speed of that change eventually encouraged in Franklin an intellectual humility informed by the recognition that almost every new discovery also marked the end of an old error. In science and medicine, this process was almost ceaseless and when Franklin was at the forefront, occasionally remorseless. As he wrote in the Autobiography of the Abbé Nollet, proponent of the theory of electricity that Franklin’s experiments had disproved, “he liv’d to see himself the last of his sect.” In the inoculation controversy, the young Benjamin Franklin seized the opening presented by an absence of evidence and like the Abbé Nollet, Franklin lived long enough to see the evidence that refuted his opportunistic and incautious arguments. These initial weeks and months of the COVID-19 crisis suggest similar risks and temptations to the ambitious. While we are still learning about the disease there will be those, like the young Benjamin Franklin, who seize the advantage arising out of our inexperience. Just like Franklin, many of those will come to a similar regret and reticence as evidence emerges that reveals not only the course of the contagion but the motives of those who saw in it an opportunity to rise.

Geoffrey C. Kellow is an Associate Professor of Intellectual History and Political Science in the College of the Humanities at Carleton University located in Ottawa, Canada.  Professor Kellow researches and teaches the political and economic thought of the Enlightenment, with a particular focus on Benjamin Franklin and the Early American Republic.