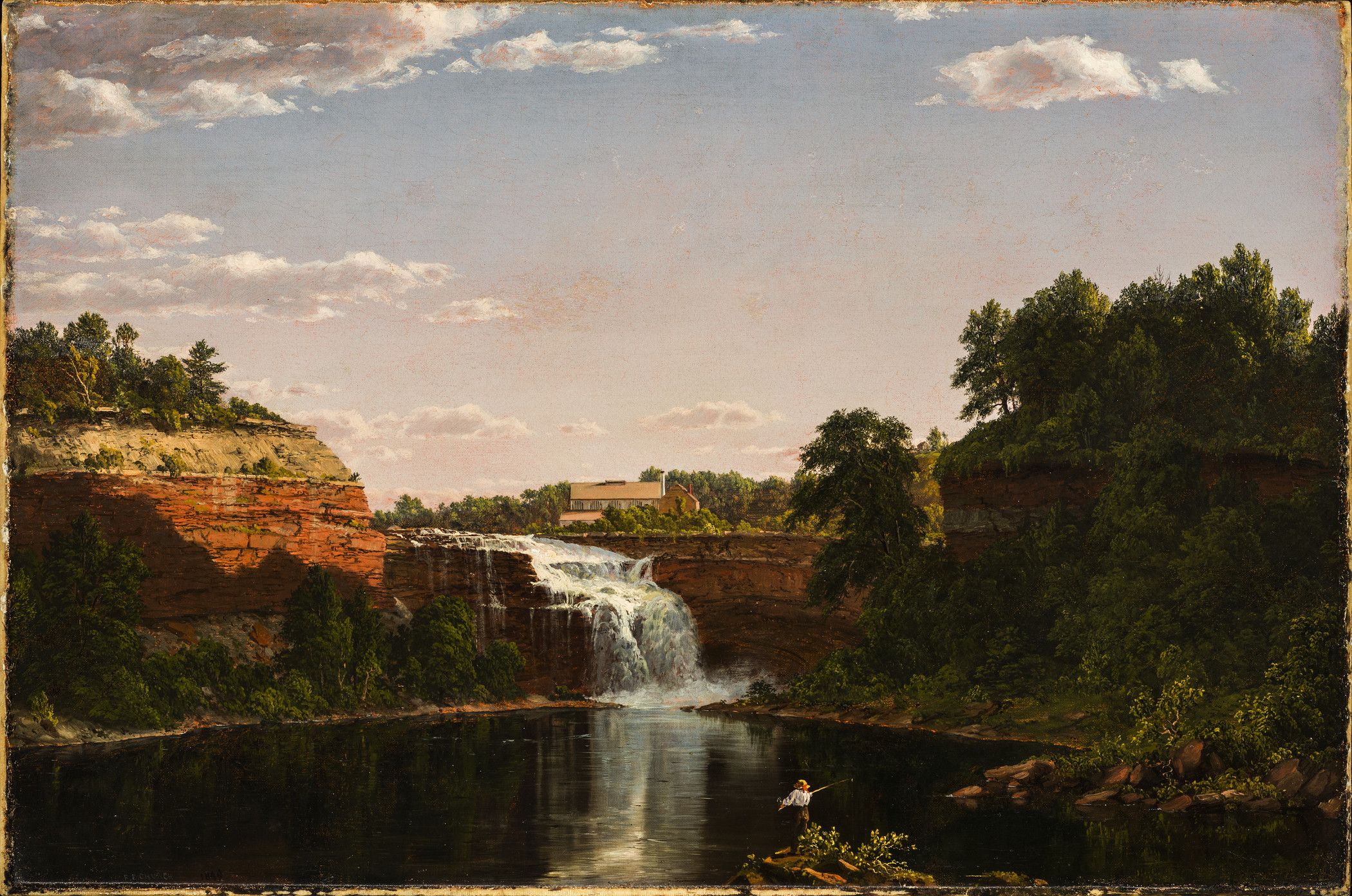 Landscape is destiny. The Genesee River, for example, flows north from Pennsylvania through the Allegheny Plateau, falling about 14 feet for every one of its 160 miles. The cracks and fissures in the earth’s crust—scars of millions of years and recent glaciation—buckle and warp the land we see today, leaving spectacular waterfalls that dot the river’s path. Nowhere is this hydrological power better harnessed than in Rochester, New York. The city was once one of the state’s largest manufacturing towns. Grain and cotton, to name just two commodities, came in as raw materials and left as processed cereals and cloth to be shipped down the Genesee and across Lake Ontario. The last of these waterfalls is known as Lower Falls.

In September 1848, Frederic Edwin Church traveled from Hudson to Rochester, where he spent two months preparing sketches for multiple paintings. Today, one of those paintings, Lower Falls, Rochester resides in the Los Angeles County Museum of Art (LACMA). By Church’s standards, the canvas is small and its details not as developed as his later, more famous work. However, this simplicity belies its political undertones, and the subject matter itself is a testament to the violence happening above and below the American landscape at the time.

The Rochester that Church entered in 1848 was a cauldron of political activism. Only nine months before, Frederick Douglass had launched the weekly North Star from a downtown office. Named for the star that guided runaway slaves towards freedom outside of the South, the paper was ceaselessly devoted to the destruction of slavery and the recognition of equality for all. Following on the heels of July’s Seneca Falls Convention (just a day’s ride away), Rochester was home to its own convention in support of women’s suffrage. In August of that year, Abigail Bush became the first woman in U.S. history to preside over a convention consisting of both men and women. It’s hard to imagine that Church, 22 years old at the time, remained untouched by these events; given the location of his selected landscape subject, perhaps it was the convention itself that spurred him on.

Church was the son of a silversmith whose financial success afforded the family a comfortable lifestyle in Connecticut. Through a family connection, Church was mentored by the artist Thomas Cole, an Englishman who had immigrated to America as a teenager. With one foot in the storytelling mythology of Neoclassicism and another in what was then-burgeoning Romanticism, Cole’s landscapes had set the tone for the new republic in the first half of the 19th century. The Course of Empire (1830s), a series of five paintings (three of which are landscapes), begins with a primitive hunting scene, continues to an idyllic, pastoral setting, and ends with a ruined, formerly decadent empire. Perhaps heavy-handed by today’s standards, an early, democratic America had few models to look to other than the ruins of Greece and Rome.

Church, however, was unencumbered by the old ways. He was a product of America from birth, and the story he wove of the natural world would take him to no fewer than three continents throughout the mid-19th century and encourage an ever-increasing interest in the science and details of the natural world.

But first, he had to learn how to paint. Time spent in Rochester allowed him to hone his craft. Eventually, he ended up at a spot that would become famous for its role in helping to free hundreds of slaves.

A couple of miles from downtown Rochester is Kelsey’s Landing, an area on the Genesee River’s western bank. During the day, this was where dozens of American and Canadian boats loaded their cargo and prepared for the remaining three miles of river before spilling into Lake Ontario. However, as dusk approached on certain nights, weary men, women, and children would emerge from hiding all around Rochester.

Led by free Rochesterians who were willing to put their own lives on the line, they made their way to the landing where there was not a moment to spare. These runaway slaves had no more than a few minutes to board with the handful of possessions they carried, the sound of their nervous voices muffled by the onslaught of the ominous Genesse crashing over the Lower Falls just 200 feet away. On some nights, one could find Frederick Douglas himself there, nearly as anxious as his brethren, staying until the very last second before they would remove the gangplank. He wrote of one evening, “I shook hands with my friends … and returned home with a sense of relief which I cannot stop here to describe.”

Lower Falls, Rochester, that landscape in the LACMA, presents us with a young man in a straw hat in the middle ground, plunging a fishing line into the river. Church, however, has not situated the viewer at Lower Falls, precisely. Rather, we’re looking upriver at the falls from Kelsey’s Landing. What appears to the viewer of 2019 as a quiet, peaceful image of the Lower Falls, would have, in reality, been filled with the sound of rambunctious boatmen, yells to coworkers across the water, the dull thuds of sacks of cereal against a boat’s wooden planks, and, yes, the final preparations for the boats that would arrive later that night to deliver Black Americans to freedom from their county’s most violent institution.

Within two years of Church’s trip to Rochester, Congress passed the second Fugitive Slave Act, making Kelsey’s Landing even more precarious for Douglass and others who supported the cause. In 1852, Uncle Tom’s Cabin turned the knob even further toward the violent confrontation that would ensue in less than a decade.

It’s hard for us to know for sure if Church was an abolitionist, a progressive, or had any ideology at all. Painfully little is known about Church’s life from his own words, and the known written records we have from him are mostly itemized sales of paintings. There are a few personal journals of specific voyages to places such as South America, but little more.

Throughout the 1850s, Church’s reputation grew. During the Civil War, some of his paintings explicitly or metaphorically channeled the country’s violent upheaval. In Our Banner in the Sky (ca. 1861) Church portrays a bare tree trunk standing tall against a crimson and tangerine sunset. It serves as a natural pole on which carefully placed clouds and stars form a flag reminiscent of—if not identical to—the flag flown over Fort Sumter. Church’s Cotopaxi (1862) is, in the words of Smithsonian curator Eleanor Harvey, an epic landscape suffused with the war. “Like the impenetrable, sulfurous smoke from the cannons that often rendered opponents unable to see each other, Church’s ash cloud descending the Andean slopes threatens to blot out the sun.” Harvey goes on to remind the viewer that Frederick Douglass himself, in 1861, called slavery “a moral volcano.”

Landscapes yield themselves to metaphor and symbolism. What an artist chooses to put in or take out further amplifies the message. For Church in progressive New York in the late 1840s, every feature and location was an opportunity. And so here we have a young man, sketching away on the banks of Genesee, a river born from the ceaseless, imperceptibly slow geologic violence of the earth, at a landing inextricably linked to the violence and benevolence of America —listening, watching, understanding.

Michael Ward holds an MS in Political Economy and is a docent at the Dallas Museum of Art.