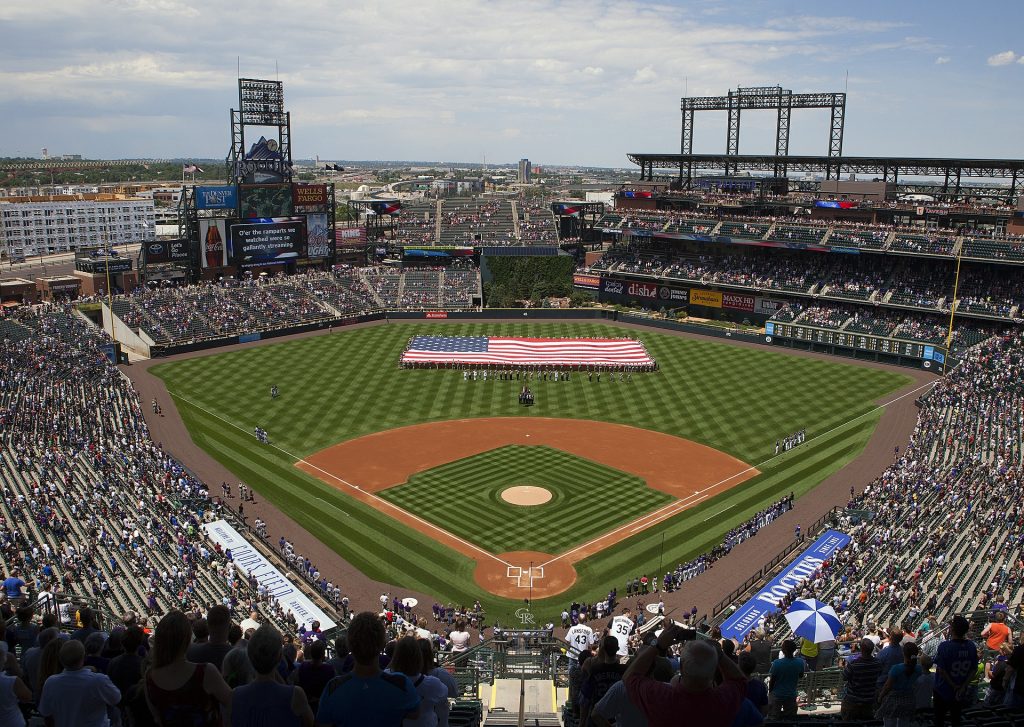 Until the work of racial reconciliation in the U.S. is done, questions will remain and the Star Spangled Banner will fall short of fitting snugly and comfortably on the proud shoulders of those who expect more from their country.

In 2016, Colin Kaepernick’s act of kneeling down during the Star Spangled Banner was a symbolic gesture that caught a great deal of national and international attention. The 49ers quarterback said he would not “stand up to show pride in a flag for a country that oppressed black people and people of color… There are bodies in the street and people getting paid leave and getting away with murder.” Bomani Jones explained in an Aug 2016 article that “[Kaepernick] focused squarely on racism, the most consistent and overpowering impediment to black success in America, and the thread that connects every era of its history.”

Even though Kaepernick has now ended his season-long protest, transitioning to a popular “Know Your Rights campaign,” public response to his protest is ongoing, ranging from heartfelt praise to passionate disdain. The most significant examples of this critical reaction came from the 44th US President, who lauded Kaepernick’s action for “generating more conversation around some topics that need to be talked about,” and from the 45th President, who advised Kaepernick derisively to “find another country.” The reason for this contrast in their reactions may be as complex as their political ideologies, or as simple as their ethnic identities.

Kaepernick’s protest and public reactions to it are nothing new, but represent another critical moment in a long history of African Americans exercising their first amendment right to communicate a feeling and sentiment about the quality of citizenship. Kaepernick was inviting us all to think critically about this notion of equality and freedom, an invitation that had been offered by many African Americans over the twentieth and into the twenty-first centuries. In 1968, during the national anthem, gold medalist Tommie Smith and bronze medalist John Carlos lifted their black-gloved fists at the Olympic games in Mexico City. When the anthem is performed, all loyal citizens are called on to turn towards the flag in an act of allegiance. Explaining this Western tradition, Raymond Firth explains that “the national flag is imbued with the sacred character of the nation; it is revered by loyal citizens and ritually defiled by those who wish to make a protest.”

AFRICAN AMERICANS HAVE CHALLENGED THE VALIDITY OF THIS SONG AS AN ANTHEM, WRITTEN BY A MAN WHO VIEWED THEM AS SUB-HUMAN.

It is logical that the anthem, a national song, becomes a point of protest for African Americans to question “the sacred character” of the nation and to draw attention to the enduring issues of racism. For people of African descent, music remains an integral part of life, identity, and culture. According to ethnomusicologist Portia K. Maultsby, the approach to music making that African Americans and other black folks in the Diaspora continue to adopt is a retention from their African heritage. Music is a communal expression of life that functions for entertainment, edification, worship, labor, information, and the bearing of tradition. Thus, music serves as an authentic expression of black life, whether it is the deep expression of rural and urban life of the Blues, the spiritual authenticity of reggae, the political pulses of afrobeat, the humorous storytelling of calypso, or the gritty narratives of hip hop. So, the idea of a National Anthem is indeed a serious matter. By definition, an anthem is “a rousing uplifting song identified with a particular group, body or cause,” and by extension, a national anthem is “a solemn patriotic song officially adopted by a country as an expression of national identity.”

This essay interrogates the notion of the “national group” by examining the purpose and ability of the National Anthem as a marker of national identity. If the last ten years have taught us anything in the US, it is that the notion of a singular American “group” is problematic. Toni Morrison’s statement that “in this country, ‘American’ means white. Everybody else has to hyphenate” has played out on various platforms. For instance, at the 2016 Olympic games, white shot putters Ryan Crouser and Joe Kovacs and black gymnast Gabby Douglas had their hands down during the national anthem. The white athletes were not questioned, but Douglas was so skewered that she had to issue a statement. In Morrison’s conception of America, this discrepancy is natural. Indeed, according to Morgan Jenkins, “whiteness is considered to be intrinsically American; therefore a white athlete’s allegiance to the flag is assumed whereas with black athletes, it is more heavily enforced.”

Kaepernick, Smith and Carlos’ strong reactions to the Star Spangled Banner remind us that Francis Scott Key had a close relationship to slavery. As Marc Leepson explains in his biography, not only did Key own slaves, he also harbored a “strong resentment of the abolitionist movement” and perhaps, by contrast, the most humane thing he did for black people was to advocate that they be returned to Africa in a sort of “colonization” program. But even this can be seen as a sign of deep racism as his organization issued a statement to the effect that the repatriation of freed slaves to Africa would help with the separation that was important to maintain between the races. Key considered African Americans as “a distinct and inferior race of people, which all experience proves to be the greatest evil that afflicts a community.” In fact, Christopher Wilson explains in the Smithsonian Magazine that “while Key was composing the line ’O’er the land of the free,’ it is likely that black slaves were trying to reach British ships in Baltimore Harbor. They knew that they were far more likely to find freedom and liberty under the Union Jack than they were under the ‘Star-Spangled Banner.’” Key’s third verse reference to the death of “the hireling and the slave” confirms his prejudice against these black folks who were searching for freedom.

THE “NEGRO NATIONAL ANTHEM” SEEMS TO FIT A UNIQUE BLACK IDENTITY THAT IS ROOTED IN AMERICA.

Therefore, African Americans have challenged the validity of this song as an anthem, written by a man who viewed them as sub-human. Besides athletes, artists have also critiqued it in their own unique ways. Jimi Hendrick’s memorable rendition of the song during his Woodstock appearance forced listeners to recall the war imagery Key intended and also to reflect on the contemporary questions of American social justice and foreign policy. Janet Jackson’s 1989 album Rhythm Nation also raises a question about this anthem. The byline for the album includes a reference to the year Francis Scott Key wrote the poem, 1814. In the song “Rhythm Nation,” Jackson raises issues related to the state of African American life: “Things are getting worse, we ought to make them better/ It’s time to give a damn, let’s work together.” And then, as historian recounting past protests and as prophet looking towards the Kaepernicks of this generation, Jackson proclaims “join voices in protest to social injustice/a generation full of courage, come forth with me.” Later, in her 2004 song “My Petition”, neo-soul singer Jill Scott laces lines from the Star Spangled Banner in with other lyrics that are written like a letter to America: “I want fresh food, clean water/Air that I don’t see/I want the feeling of being safe on my streets/I want my children to be smarter than me/I want to feel free.” Here Scott brilliantly references the food deserts that exist in urban areas, the pollution that affects poor people, police brutality and crime, as well as the deplorable state of the public school system that affects African Americans in high proportions. The song ends with a paradoxical “Oh say can you see/By the dawn’s early night.”

In contrast, the “Negro National Anthem” seems to fit a unique Black identity that is rooted in America. Written as a poem by James Weldon Johnson and set to music by his brother J. Rosamond Johnson in 1900, what the brothers called the Negro National Hymn was adopted by the NAACP as an anthem in 1919. In 2000, former NAACP president and longtime civil rights activist Julian Bond published an anthology of reflections on this anthem. One of these was a reflection by African American historian John Hope Franklin, who cited the last lines of the song, “true to our God/true to our native land,” as a reminder to Black folks that America is indeed their home: “Whenever I hear the words, I can hear James Weldon Johnson admonishing me to keep the faith.”

In February 2017, the Oakwood Aeolians, a renowned choir from a historically Black college (HBCU) in Alabama performed at the University of Missouri. They began with a rendition of the “Negro National Anthem,” also known as “Lift Every Voice and Sing.” As they began to sing, all the black folks in the hall promptly stood up. Most of the white folks remained seated, looking confused. This moment was a reminder that not everybody relates to that song as a “National Anthem.” It is almost a mirror image of why many African Americans continue to question the validity of the “Star Spangled Banner.” Both songs began as heartfelt poems deeply connected to a pride in American identity. But according to Colin Powell, also quoted in Bond’s book, the Star Spangled Banner “represents an ideal that was promised, but not granted to all.” These questions endure in the twenty-first century where icons like Trayvon Martin, Sandra Bland, Eric Garner, Tamir Rice, and Mike Brown have inspired the Black Lives Matter Movement.

The American Anthem as it stands will continue to draw questions from those Americans who feel oppressed and marginalized, especially as the US administration in 2017 has been clear about its disregard for immigrants, women, and people of color. The anthem will continue to be protested, to the ire and irritation of other Americans who simply look away from injustice and accuse the protesters of being un-American. Referring to the racist sentiment of expelling African Americans who raise questions about the nation, exhibited by Francis Scott Key and some US presidents like Andrew Jackson, Thomas Jefferson, and most recently Donald Trump, James Weldon Johnson countered that “we may cross out exodus as a possible solution. We and the white people may as well make up our minds definitely that we, the same as they, are in this country to stay. We may be causing white America some annoyance, but we ourselves are not passing the time in undisturbed comfort. White America will simply have to sustain a situation that is of its own making, not ours.”

Until that work is done, questions will remain and the Star Spangled Banner will fall short of fitting snugly and comfortably on the proud shoulders of those who expect more from their country. The great irony is that what Kaepernick and the other athletes have done is to exhibit the very freedom that Key wrote about, the freedom to speak, critique, and hold their country to the standard to which it aspires:

Stephanie Shonekan is an Associate Professor of Ethnomusicology and Director of the Black Studies Department at the University of Missouri.