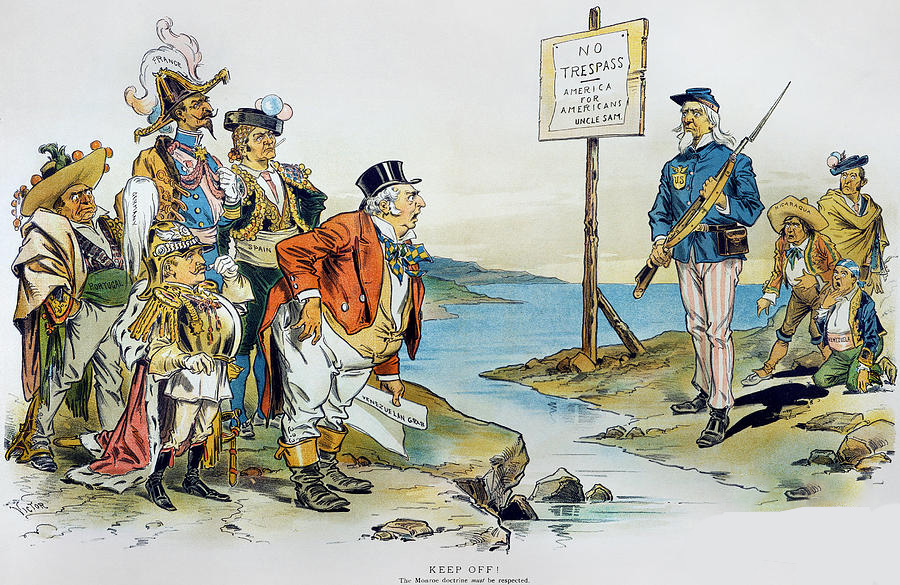 When Donald Trump states that our nation’s interests come first, he is indeed following in the Founders’ footsteps. Putting American self-interest first does not, though, imply a crassly selfish or imperialistic disregard for the interests and rights of other nations.

When the newly anointed president of the United States proclaimed that it was now time to put “America First,” he was signaling that America’s self-interest would be taking precedence over everyone else’s in American foreign policy calculations. Putting American self-interest first does not, though, imply a crassly selfish or imperialistic disregard for the interests and rights of other nations. This misunderstanding was similarly applied to the Founders’ foreign policy, who have been depicted as hard-core realists and imperialists at heart despite their much-vaunted rhetoric about virtue.

Henry Kissinger is a notorious proponent of this view. In his book Diplomacy (1994), Kissinger takes George Washington’s alleged antipathy to “permanent alliances” as an expression of a naïve moralism, which in Kissinger’s view amounted to a “rejection of the truisms of European diplomacy that the balance of power distilled an ultimate harmony out of the competition of selfish interests, and that security considerations overrode the principles of civil law; in other words, that the ends justifies the means.” With ironic magnanimity, he speculates that Washington was merely being hypocritical; that in truth, “in the early years of the Republic, American foreign policy was in fact a sophisticated reflection of American national interest.” Kissinger points to the Monroe Doctrine as the smoking gun that proves beyond a doubt America’s underlying disingenuous moralism:

“Under the umbrella of the Monroe Doctrine, America could pursue policies which were not all that different from the dreams of any European king—expanding its commerce and influence, annexing territory—in short, turning itself into a Great Power without being required to practice power politics.”

I argue that Kissinger got it wrong. First, Washington was not opposing all alliances, merely the “permanent” kind that a young America could ill afford. His alleged “moralism” was hardly disingenuous. But more important, he and his fellow Founders had never intended to establish an expansionist colonial power. Kissinger’s misreading of America’s original approach to foreign policy, though perhaps serving to elucidate his own political philosophy, ruefully misrepresents his adopted nation’s vision. The principles guiding its original leaders were very different indeed from “the dreams of any European king.” The Founders were eager to keep America safe from foreign occupation, not to occupy others. Safety was their main concern.

THE IDEAS THAT ULTIMATELY BECAME THE MONROE DOCTRINE WERE ACTUALLY ANTICIPATED FOUR DECADES EARLIER, IN 1781, BY ALEXANDER HAMILTON IN FEDERALIST 11.

In The Way of the Fox: American Strategy in the War for America 1775–1783, General David Palmer explains clearly the complex purpose of the Revolutionary War, which included, besides the obvious one of independence from Britain, a limited territorial expansion beyond the original thirteen colonies. Most Founders thought such an expansion would be required for future survival:

“An aim neither so well known nor so generally accepted as independence, nor ever formally announced, it was nonetheless an acknowledged objective even before hostilities began. The drive to expand preceded the desire for independence. Together they formed a concise statement of the goal of grand strategy in the Revolutionary War: a United States unencumbered by European control and preeminent on the North American continent.”

Not until after winning the War did anyone dare hope to fulfill that second aim, and then it was merely whispered, in secret instructions to American diplomats. For that reason, Washington’s adaptive strategy included both offensive and defensive components, required by the larger goals that he had been determined to achieve. Writes Palmer: “[T]he view beyond the horizon of the war showed a United States independent of Europe and dominant in North America. . . . Success or failure in winning the peace would depend upon whether patriot aims achieved the dual objective of the revolution.” Inability to appreciate this fact is to miss entirely the very core of this nation’s vision of itself and of its place in the world.

The ideas that ultimately became the Monroe Doctrine were actually anticipated four decades earlier, in 1781, by Alexander Hamilton in Federalist 11. “[O]ur situation,” observed Hamilton, “invites[,] and our interests prompt us[,] to aim at an ascendant in the system of American affairs.” He explained that the world may be divided into four geopolitical regions—Europe, Asia, Africa, and America—with the latter implicitly including the Western hemisphere as a whole.

Remonstrating Europe for being tempted to “plume itself mistress of the world” on the basis of unwarranted, “great pretensions,” Hamilton had the temerity to admonish it, adding that it was now America’s job to “teach that assuming brother moderation” and resist becoming one more vassal state. The New World would be no meek little sibling; it would erect (and here comes the grand vision) “one great American system superior to the control of all transatlantic force or influence and able to dictate the terms of the connection between the old and the new world!”

Contrary to Kissinger’s view, nothing was farther from Hamilton’s mind than to create a double standard. Surely he was not castigating European imperialism while defending similar behavior by the United States: Hamilton believed that European colonialism was the natural consequence of condescending elitism and hostility to democracy. His opinions on imperialism had been clearly expressed in defense of recognizing the independence of Vermont against efforts by Hamilton’s own state of New York to forcefully annex the Green Mountain state. In his memorable, though now all but forgotten, speech of March 14, 1787, Hamilton denounced coerced seizure of another community as a matter of principle. As historian Karl-Friedrich Walling wrote in his splendid book Republican Empire: Alexander Hamilton on War and Free Government (1999): “Though neglected by Hamilton’s partisans and critics alike, his short speech deserves to be considered as one of the classic American discussions of imperialism.”

WHAT HAMILTON EXPRESSED WAS A CONVICTION THAT THE IDEA OF SELF-GOVERNMENT WAS INCOMPATIBLE WITH IMPERIAL DESIGNS AND IMPERIAL BEHAVIOR.

For domestic political reasons, trying not to alienate his opponents more than necessary, Hamilton argued first on practical grounds that Vermonters—who were de facto, even if not de jure, no less independent than New Yorkers—would simply forge an alliance with foreign nations. This would threaten the entire Union and thus, New York itself. But his philosophical rationale against coercing people to live under occupation, as New York appeared ready to do, was far more comprehensive.

The occasion soon presented itself to express those views when, a few days later, on March 28, New York lawyer Richard Harison explicitly suggested, in a fit of hubris, that New Yorkers emulate the Romans. Hamilton forcefully retorted: “Neither the manners nor the genius of Rome are suited to the republic or age we live in. All her maxims and habits were military, her government was constituted for war. Ours is unfit for it and our situation still less than our constitution, invites us to emulate the conduct of Rome, or to attempt a display of unprofitable heroism.” He added that “a scheme of coercion” would be ill-suited to the “disposition of our citizens; the habits of thinking, to which the revolution has given birth, are not adapted to the idea of a contest for dominion over a people not inclined to live under our government.”

What Hamilton expressed was a conviction that the idea of self-government was incompatible with imperial designs and imperial behavior. Walling observes that here were “the seeds of the Monroe Doctrine as a vehicle for resisting European imperialism;” and though “there was no possible way for Hamilton to offer prescriptions when the Latin American colonies had not yet won their independence . . . he was not encouraging imperialism in any way.” It is quite true, of course, that American ascendance could lead to imperialism—and did so, briefly, in the late nineteenth century—but not only was this not inevitable, it was in fact contrary to the Founders’ vision. Walling doesn’t mince words: “[L]ate-nineteenth century views of imperialism as a positive benefit for peoples subjugated by Americans were as much a corruption of the Founders’ thought as were views of slavery as a positive good before the civil war.”

When Donald Trump states that our nation’s interests come first, he is indeed following in the Founders’ footsteps. And it is refreshing to hear it stated candidly, for surely a government by and for the people should have a robust, effective national defense as its principal function. This emphasis on American interests does not, however, necessarily lead to imperialism or a denigration of the interests of other nations. The Founders of this nation were not imperialists, and neither are the American people today.

Juliana Geran Pilon, PhD, is a Senior Fellow at the Alexander Hamilton Institute for the Study of Western Civilization. This article is partly based on her latest book, The Art of Peace: Engaging a Complex World (Transaction Publishers, 2016).