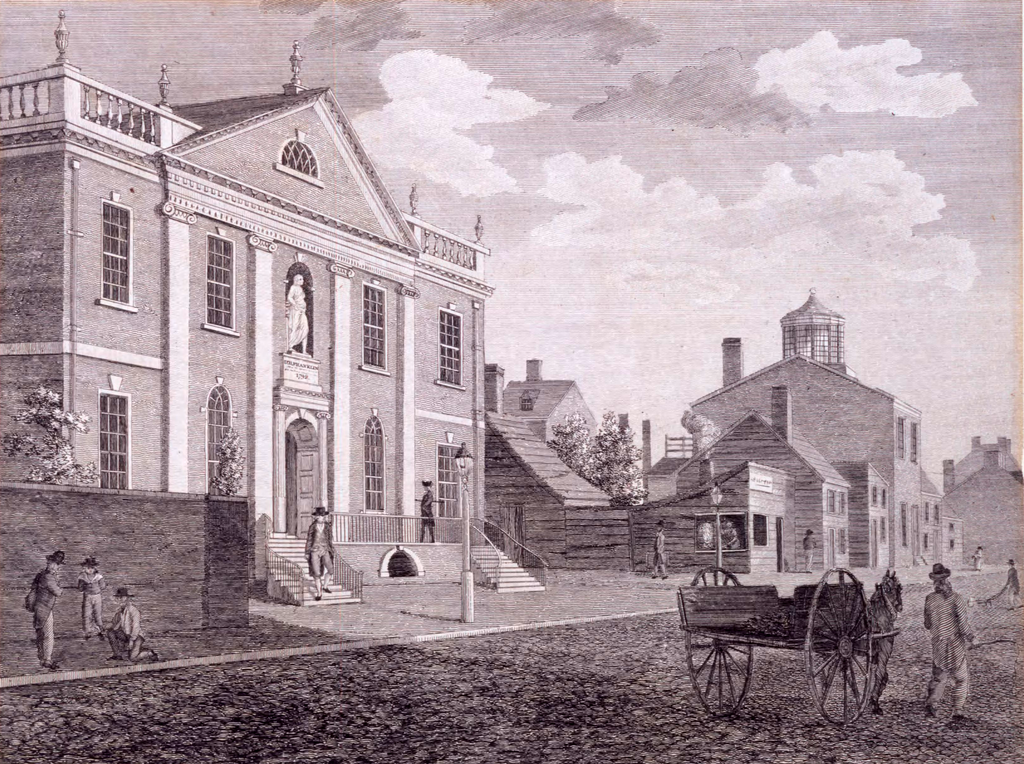 A deadly virus suddenly claims thousands of lives.  People cover their mouths with makeshift masks in a bid to avoid exposure. Anxious officials look for buildings to repurpose into provisional hospitals to accommodate the sudden surge of patients.  Doctors on the front lines fall ill themselves; a number of these brave physicians lose their lives.  Some commentators blame foreigners for the disease, while others dismiss such talk as anti-immigrant nonsense.  Anyone newly arriving onshore is ordered to self-quarantine for two weeks.  Economic catastrophe sets in almost overnight.

The year is 1793. Welcome to Alexander Hamilton’s Philadelphia.

Dubbed the “Athens of America,” Philadelphia of the time was the seat of the federal government, home to numerous learned societies, and a vibrant hub for the arts.  It was also ground zero for a devastating yellow fever epidemic that killed one in ten residents that year.  Those struck with the frightful disease suffered from high fever, saw their skin become jaundiced, and vomited blood.  The fatality rate for those infected reached nearly fifty percent.

The tragic epidemic that afflicted Philadelphia bears some striking similarities to the contagion currently plaguing our nation and the world.  It remains to be seen whether the parallels will extend to the politics of our pandemic.  The sudden shock of the novel coronavirus led to bipartisan measures on Capitol Hill that would have seemed unimaginable just a short time ago.  Yet there are visible signs that this crisis may be devolving into partisan rancor, and if it does, we will prove ourselves fitting heirs to our factional forebearers.

Alexander Hamilton, serving as Treasury Secretary, had been a lightning rod at the center of every political controversy during the Washington Administration—and the yellow fever epidemic of 1793 was no exception.  The country at large was divided between Jeffersonian Republicans and Hamiltonian Federalists.  And these two factions fiercely disagreed on the question of what caused the mysterious fever ravaging Philadelphia.   Even medical experts could differ in their assessment of the fever’s origin and treatment based on political allegiance.

The prominent Federalist physician Edward Stevens was a devotee of Hamilton and an advocate for the theory that the illness was imported from abroad.  He also advocated the so-called “Federalist cure” involving red cinchona bark, doses of wine, and baths in cold water.  Dr. Stevens and Hamilton were more than just fellow Federalists; years earlier on St. Croix, the orphaned Hamilton lived with Stevens and his family, and the two boys forged an enduring friendship.

Hamilton’s critics, most notably Benjamin Rush, subscribed to a competing theory: yellow fever had local origins.  Dr. Rush championed the “Republican cure” of bloodletting and doses of mercury, which left many of his patients disfigured.  (In 1901, Walter Reed demonstrated that yellow fever was actually spread by mosquitoes, an etiology that neither side understood in the 1790s).

Hamilton threw his considerable clout behind Dr. Stevens.  In a letter published in a Philadelphia newspaper, the Treasury Secretary acknowledged that he himself had been “attacked with the reigning putrid fever” but could now report that he was “out of danger” owing to the “care of my friend Doctor Stevens.”  Despite the success of Stevens’ methods, the letter observed, “his mode of treating the disorder varies essentially from that which has been generally practised”—an unsubtle jab at Dr. Rush and his band of followers.  Hamilton never missed an opportunity to troll a rival.

Rush was incensed by Hamilton’s letter, which had persuaded a number of patients to request the “Federalist cure” over Rush’s own.  Dr. Rush was not only irked by what he considered bad medicine, but also by Hamilton’s motivations, which he was sure were political in nature.  In the end, nature resolved what the fractured medical establishment could not—the onset of cooler temperatures ushered off the mosquitos, and with them, yellow fever.

Perhaps in 2020, we can reach across party divides to unify behind the best of modern medicine.  Or maybe we will splinter along partisan lines and render impossible the collective effort that defeating this pandemic requires.  Sometimes the Founders bequeath us wisdom.  Let us hope that in the midst of this lethal contagion, we can also discern their cautionary tales.

Andrew Porwancher is the Wick Cary Associate Professor in Constitutional Studies at the University Oklahoma and currently at work on a biography of Alexander Hamilton.