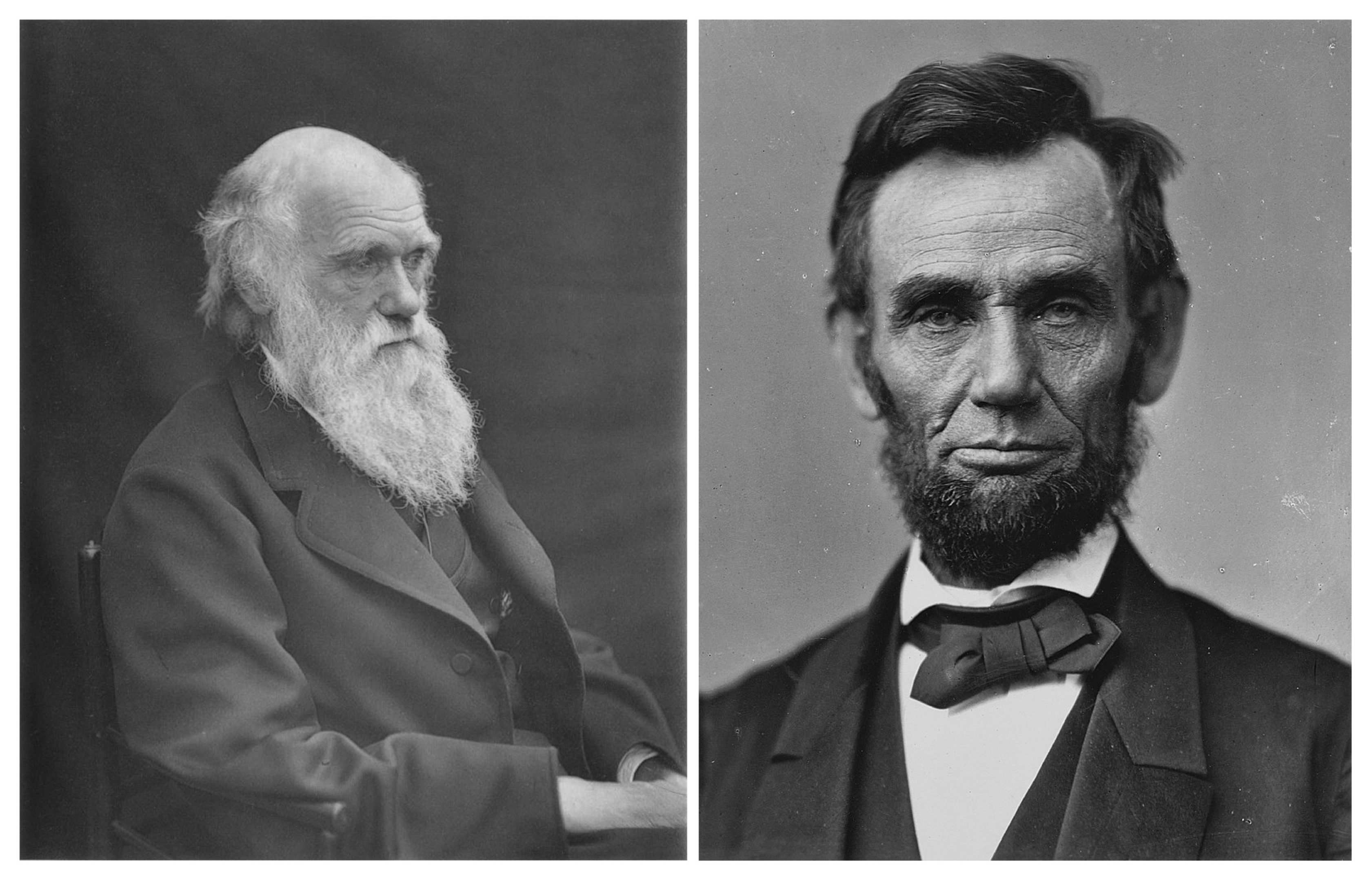 On February 12, 1809, Abraham Lincoln was born in Hardin County, Kentucky; and Charles Darwin was born in Shrewsbury, England. The coincidence of their being born on the same day might lead us to think about the points of similarity in their lives.

William Herndon was Lincoln’s friend and law partner, and he wrote one of the best biographies of Lincoln. He says that he gave Lincoln a copy of Robert Chambers’ book Vestiges of the Natural History of Creation, which was first published in 1844. Chambers set forth a theory of evolution that Darwin later acknowledged as a forerunner of his theory. Chambers’ book created a great controversy, because many people saw it as denying the role of God as Creator of the universe. According to Herndon, Lincoln was persuaded to adopt this new theory of evolution, because it confirmed his belief that everything in the universe must occur by natural causes. So it seems that Lincoln and Darwin were in agreement in their scientific naturalism and evolutionary views.

Because of their reliance on scientific explanation, both Lincoln and Darwin were accused by some people of promoting atheism by denying the doctrine of Creation. According to Herndon, Lincoln as a young man wrote a book against Christianity arguing that the Bible was not divinely inspired and that Jesus was not the son of God. He was warned by his friends that it was dangerous to make such arguments in public.

In 1846, Lincoln was running for election to Congress, and he had to answer the charge that he was an “infidel.” In his written response, he acknowledged that he had never been a member of any Christian church. But he insisted that he had never openly promoted disrespect for Christianity. He conceded that he had defended—in private with a few friends—the “doctrine of necessity,” the idea that the human mind is determined by causal necessity beyond its control. But he thought some Christian denominations defended the same doctrine. Moreover, he wrote: “I do not think I could myself be brought to support a man for office, whom I knew to be an open enemy of, and scoffer at, religion. Leaving the higher matter of eternal consequences, between him and his Maker, I still do not think any man has the right thus to insult the feelings, and injure the morals, of the community in which he may live.”

Lincoln often spoke as if God as Creator must be the First Cause of the universe, and he also commonly invoked the Bible as a source of moral teaching. And yet he also appealed to a natural “moral sense” inherent in human nature, which suggested a natural morality that did not depend on biblical doctrine.

One manifest expression of the “moral sense,” according to Lincoln, was the moral feeling against slavery. To reinforce this moral feeling that slavery was unjust, Lincoln would quote the scriptural doctrine of human beings as created in God’s image and the scriptural teaching of the golden rule. He did this despite the fact that the pro-slavery Christians in the American South quoted the specific passages on slavery in the Bible as supporting slavery.

On all of these points, Darwin took similar positions. Although he began life as an orthodox Christian, he eventually reached a point of being a skeptic or agnostic. He was particularly disturbed by the unmerited suffering of human beings—such as his child Annie, who died when she was 10 years old—as casting doubt on the existence of an all-good God. And yet he acknowledged that the First Cause of the universe was a mystery pointing to the existence of God. In his published writings, he regularly acknowledged that evolution might depend ultimately on the laws that the Creator had impressed on matter.

Darwin celebrated Lincoln’s Emancipation Proclamation of January 1, 1863, because he saw that this would turn the Civil War into a war of emancipation.

Darwin also agreed with Lincoln in seeing morality as rooted in a natural “moral sense.” Although this natural morality could stand on its own, it could also be reinforced by biblical morality. Like Lincoln, Darwin saw the Bible’s teaching of the golden rule as confirming the ultimate principle of natural morality.

Darwin was also a fervent critic of slavery as contrary to the natural moral sense. Against the scientific racists who argued that the human races were actually separate species, Darwin (in The Descent of Man) laid out the evidence for the universal traits shared by all human races as members of the same species.

Darwin followed, with deep interest, the events of the American Civil War as reported in the London Times. Like other abolitionists and members of the British Liberal Party, he was disappointed by Lincoln’s slowness in abolishing slavery. But Darwin celebrated Lincoln’s Emancipation Proclamation on January 1, 1863, because he saw that this would turn the Civil War into a war of emancipation.

Lincoln and Darwin seemed to agree that we can explain the natural order of the universe as a product of natural evolutionary causes. But if we ask about the First Causes of Nature itself, we face a mystery that points to God as Creator. There is a natural moral sense that allows us to make moral judgments independently of any religious beliefs. And yet Biblical religion can reinforce natural morality by appeal to God as the moral lawgiver. Moreover, religion generally can have beneficial social effects because it helps people to cooperate more effectively by promoting social trust among the believers.

On all of these points, conservatives should see Darwinian science as confirming their principles of ordered liberty as rooted in traditional morality and religious belief. Many religious conservatives object to what they assume is the atheistic teaching of Darwinism, and that’s why many of them support “scientific creationism” or “intelligent design theory” as alternatives to Darwinian science. But this ignores the possible compatibility of evolution and religion. In fact, there have been many theistic evolutionists—from Asa Gray to C. S. Lewis to Francis Collins to Mitt Romney.

Darwin himself suggests a theistic evolutionism in the last paragraph of The Origin of Species:

It is interesting to contemplate a tangled bank, clothed with many plants of many kinds, with birds singing on the bushes, with various insects flitting about, and with worms crawling through the damp earth, and to reflect that these elaborately constructed forms, so different from each other, and dependent upon each other in so complex a manner, have all been produced by laws acting around us. These laws, taken in the largest sense, being Growth with Reproduction; Inheritance which is almost implied by reproduction; Variability from the indirect and direct action of the conditions of life, and from use and disuse; a Ratio of Increase so high as to lead to a Struggle for Life, and as a consequence to Natural Selection, entailing Divergence of Character and the Extinction of less-improved forms. Thus, from the war of nature, from famine and death, the most exalted object which we are capable of conceiving, namely, the production of the higher animals, directly follows. There is grandeur in this view of life, with its several powers, having been originally breathed by the Creator into a few forms or into one; and that, whilst this planet has gone cycling on according to the fixed law of gravity, from so simple a beginning endless forms most beautiful and most wonderful have been, and are being evolved.

Thus, in celebrating the simultaneous birthdays of Lincoln and Darwin, we can ponder what I see as the seven points of similarity between them.

(1) Both saw the universe as governed by natural laws, which included the natural laws for the evolution of life.
(2) Both were accused of denying the Biblical doctrine of Creation.
(3) Both spoke of God as First Cause.
(4) Both appealed to the Bible as a source of moral teaching, even as they also appealed to a natural moral sense independent of Biblical religion.
(5) Both abhorred slavery as immoral.
(6) Both were moral realists.
(7) Both were classical liberals.

Larry Arnhart is a Distinguished Research Professor Emeritus of Political Science at Northern Illinois University. His most recent book is the fourth edition of Political Questions: Political Philosophy from Plato to Pinker. His blog is named “Darwinian Conservatism.”