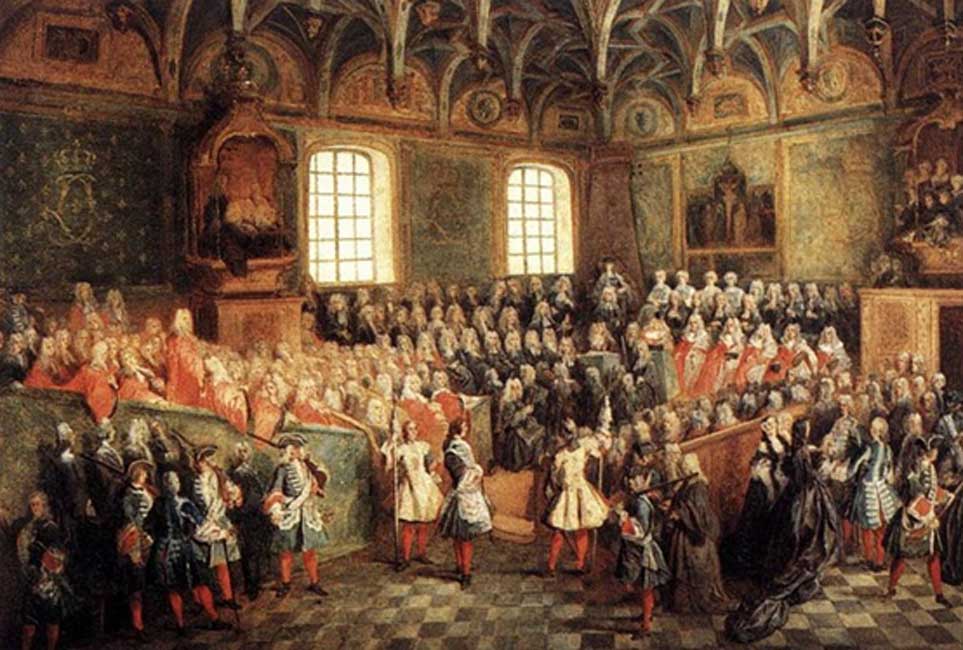 Political parties are an integral part of modern representative democracy. Among other things, they are instruments for finding and promoting political leaders, organizing competition for office, representing and adjudicating between various interests and opinions, and formulating policy. Yet it was not easy for Americans in the early republic to learn how to live with party politics. When the world looks at the current intensified partisanship in the United States, it is important to recognize that party strife is by its nature a messy activity – a fact demonstrated by any examination of the place of parties in history and politics. People should not have unrealistic expectations about partisan politics, which is meant to produce a winner – and later hold winners accountable – rather than a consensus. This does not mean, however, that we should disregard civility and toleration within party conflict, since these values are critical to the possibility of peaceful disagreement.

David Ramsay closed his 1789 History of the American Revolution from 1789 by saying that the new republic needed to “[a]void discord, faction, luxury and the other vices which have been the bane of commonwealths.” We often hear that the Founding Fathers were disgusted with parties and partisanship. Of course, many of them were, perhaps especially John Adams and George Washington. As Richard Hofstadter argued in his seminal book, The Idea of a Party System (1969), an important shift took place between the generation of Thomas Jefferson, James Madison and James Monroe, and the following one of Andrew Jackson and (especially) Martin van Buren (President in 1837–41). The first generation was influenced by the British eighteenth-century party debate, and philosophical questions about human nature, as well as ideological and constitutional considerations. By contrast, Van Buren and the second generation of American politicians had much more practical views of what party organization could accomplish.

In a forthcoming essay in a collected volume to be published by the University Press of Florida, about the intellectual origins of the American Presidency, I argue that we should neither neglect the contribution of the Founders to the debate about party nor the British eighteenth-century discourse they drew upon. One important contribution was the influence of the Scottish Enlightenment philosopher and historian David Hume (1711-76) on the Federalist Papers, in particular the most famous of them all: Madison’s Federalist 10. This is the essay in which Madison argued that parties reflect differences of opinion in society, and must continue “[a]s long as the reason of man continues fallible, and he is at liberty to exercise it.”

Madison agreed with Hume that parties representing economic interests were generally more peaceful and governable than parties united and actuated by passion. His solution to party violence was also similar to that expressed in Hume’s 1752 essay “Of a Perfect Commonwealth”: the effects of faction can be better controlled in larger states and federations rather than in city states. In a larger area, the impact of each faction would be mitigated. This “Humean” argument enabled Madison to contend, against much eighteenth-century political thought, that republicanism was possible and maybe even preferable in large, federative states. The key was to make sure that no faction would become overly dominant, and this was easier to achieve on a larger scale as opposed to in a small community.

In addition to Madison’s appropriation of Hume, what really stands out is the Jeffersonian Republicans’ justification of organized opposition to the Federalist Party in the 1790s. Organized opposition party politics was first theorized by the English parliamentarian-cum-political writer Henry St John, 1st Viscount Bolingbroke (1678-1751) in Britain in the 1730s, as I have argued in a 2016 article in the Historical Journal. Bolingbroke’s “Country party” was intended as a constitutional party which contended that the government of the day (Walpole’s Whigs) had betrayed the core principles of the constitution by corrupting politics and society. To save the nation, he argued that it must be opposed, and that opposition needed to be systematic and concerted. “Every administration is a system of conduct: opposition, therefore, should be a system of conduct likewise,” he wrote in his 1736 Letter on the Spirit of Patriotism.

The ideal for Jefferson and other opponents of the Federalists, such as John Taylor of Caroline, was national unity. However, because of what they perceived as the corruption of Federalists such as Alexander Hamilton, an opposition party in the shape of the Republican Party was necessary in order to defeat the enemies within. Jefferson was clear that the Hamiltonians and the Federalists were monarchists and he viewed the 1790s as an ideological battle between liberty and tyranny. In this struggle, partisanship became a necessary evil. Justifying opposition was also Madison’s new preoccupation in his essays on party in the 1790s, notably in “A Candid State of Parties” (1792). This phase was crucial for the development of “constitutional opposition,” a phrase used by the Federal judge Alexander Addison in 1800.

The topic of party came up at the 2019 summer institute, organized by the Jack Miller Center, on the theme of “America in the Republican Tradition” – appropriately organized in Philadelphia where the Declaration of Independence was signed and the Constitutional Convention held. At the event, Professor George Thomas of Claremont McKenna College argued in his session on “Constructing Free Speech in Republic Government” that conceptualizing party government was central for Madison when he protested against the Federalists’ Sedition Act of 1798. This Act – often considered together with the Alien Friends and Alien Enemies Acts, which enabled the President to imprison and deport foreigners who were deemed a threat to the peace of the republic – banned speech and writings which brought the government into contempt. It specifically targeted Jeffersonian newspapers critical of the Federal government in general and the Adams Presidency in particular. In this context, Madison contended forcefully in the Virginia Resolutions that criticizing the party in power was not the same as criticizing the Federal constitution. This was very similar to the way Bolingbroke had justified opposition to Walpole’s Court Whig government in the 1730s. This argument is still important since it is sometimes still forgotten that criticizing the policies of the incumbent is not necessarily the same as being unpatriotic and criticizing the constitution.

The argument for systematic opposition party politics – paving the way for the notion of loyal opposition which subsequently become crucial in democratic states – is not a nineteenth-century argument, but one that originates in the eighteenth century. The contributions of Bolingbroke in the British context along with Madison and other Democratic-Republicans in America should not be underappreciated.

Today, it is worthwhile to return to Hume’s contribution to the debate about party politics. Hume was critical of extreme partisanship, which he believed had pushed his country into civil war in the previous century, and fueled the survival of Jacobitism – the movement to restore the exiled Stuart royal family in eighteenth-century Britain – with all its concomitant instability in his own century. Yet Hume did not believe that parties could ever be abolished. As long as Britain remained free and people were at liberty to form and express opinions, and as long as it retained its parliamentary system whereby politicians competed for political power, parties would subsist. The key was to pacify them. This could be done by keeping conflicting forces balanced through mutual checking. As Madison wrote in Federalist 51: “Ambition must be made to counteract ambition.” Yet this is not enough for Hume. The contention must also be civil. This may sound like a trivial requirement, but we can certainly see why it was important for Hume considering that he was writing in a country which had been torn apart by civil war and religious strife in the sixteenth and seventeenth centuries. Indeed, what unified enlightenment political thought was the ambition to prevent a return to religious warfare. Today, it is abundantly clear that civility is a largely forgotten political virtue, and that political discourse has paid the price for its absence.

In “Of a Coalition of Parties” (1758), Hume argued that “[t]he only dangerous parties are such as entertain opposite views with regard to the essentials of government,” be it the succession to the crown as in the case of the Jacobites, or ”the more considerable privileges belonging to the several members of the constitution,” as with the great parties of the seventeenth century, whose fate he narrated in the History of England (6 volumes, 1754-61). On such questions there could be no compromise or accommodation, and there was no room for such parties, since that type of party strife could easily turn into armed conflict. By contrast to these parties, Britain’s eighteenth-century division in parliament was potentially harmless. Hume’s ambition, as he argued in the conclusion to his famous essay “That Politics May be Reduced to a Science” (1741), was to “persuade men not to contend, as if they were fighting pro aris & focis [for God and Country, or, literally, for altars and hearths], and change a good constitution into a bad one, by the violence of their factions.” In other words, party conflict could only work in an environment of agreement about the essentials of government, and a degree of mutual respect and introspection among partisans.

In theory, this should be more straightforward in a country like the United States, thanks to its written constitution. In practice, however, as George Thomas argues in The Madisonian Constitution (2008), constitutionalism need not imply that Americans are excused from the responsibility of constitutional judgements, and conflict has been a perennial feature of American constitutionalism. This may be no bad thing, as long as it is conducted with civility and within a constitutional framework. If civility is achieved, constitutional debate can be dialogic rather than agonistic. Party politics can then also be energetic without risking escalation into excesses that undermine any form of trust and solidarity among members and supporters of different parties.

Max Skjönsberg is a Postdoctoral Research Associate at the University of Liverpool, working on a collaborative project on “Libraries, Reading Communities and Cultural Formation in the Eighteenth-Century Atlantic.” His first monograph – The Persistence of Party: Ideas of Harmonious Discord in Eighteenth-Century Britain – will be published by Cambridge University Press in 2021. This essay is in part based on notes taken during the August 2019 Jack Miller Center Summer Institute, held in Philadelphia, PA.